Please ensure Javascript is enabled for purposes of website accessibility
Log In Help Join The Motley Fool
Free Article Join Over 1 Million Premium Members And Get More In-Depth Stock Guidance and Research
By Chris Neiger - Aug 1, 2017 at 9:39AM

Intel is constantly moving further into the driverless car world as it tries to expand revenue beyond PC chip sales.

Last week Intel (INTC 3.21%) published a short post on its website saying that the company's processors will be part of the semi-autonomous driving systems in the new 2018 Audi (AUDVF) A8. The announcement came after the Silicon Valley Business Journal published a report about Intel's chips powering the A8. This is important news because it means that Intel is yet another step closer to pivoting away from slowing revenue segments like PC chip sales and into growing ones like the driverless car market.

Intel still has plenty to prove as it makes this transition, but supplying chips for Audi's semi-autonomous vehicle -- along with the company's purchase of semi-autonomous car tech company Mobileye (MBLY) earlier this year -- make it clear that Intel is taking the driverless car market very seriously. That's good news for both the company and its investors because self-driving cars are poised to become a $77 billion market by 2035. 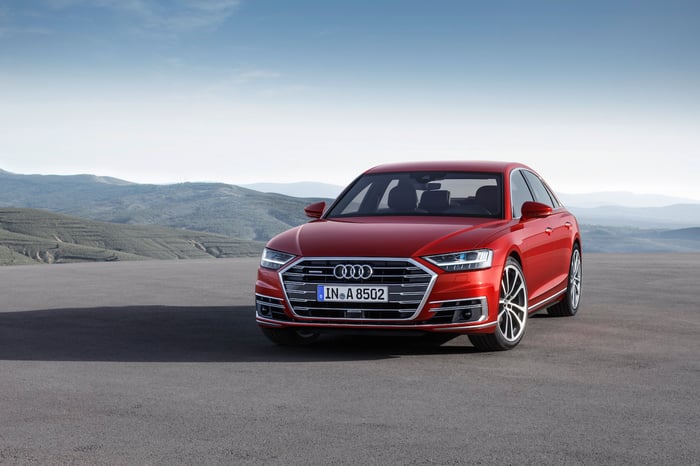 Intel makes 55% of its total revenue from its Client Computing Group (CCG) segment, which is primarily focused on selling chips for computers, tablets, and other devices. But PC sales are on the decline, and Intel is feeling it. The company's CCG sales fell 11% year over year from 2014 to 2015 and fell 10% from 2015 to 2016. Because of these drops and the overall slowdown in the PC market, Intel has been eager to find new ways to grow revenue apart from PC chips sales.

That's why this latest news that the company is providing chips to Audi for its new semi-autonomous car is so important. The move means that Intel is officially tapping into the automotive semiconductor market that's expected to be worth $48.8 billion by 2022. Intel is still a small player in the space, but the new partnership with Audi could certainly lead to more opportunities for Intel down the road.

The company says the processors in Audi's A8 will come from its Programmable Solutions Group (PSG) -- and from its Wind River subsidiary -- which could eventually help boost revenues in this segment. PSG only attributed 3% of Intel's total revenue in 2016 and added just $1.67 billion to the company's total revenue of $59.4 billion.

But Intel believes there's a massive change coming in the automotive transportation market, and it's hoping it can put itself in the perfect position. Recently the company issued a joint report with Strategy Analytics that said autonomous cars will create a $7 trillion passenger economy filled with autonomous ride-sharing vehicles, automakers renting out their cars, and new businesses popping up around driverless vehicles.

Intel aims to benefit from this growing passenger economy by tackling the processor market and through its own semi-autonomous driving technology with Mobileye. Intel's recent acquisition Mobileye makes technology for advanced driver assistance systems (ADAS) -- which includes tech like automatic braking and adaptive cruise control -- and these systems are the stepping stones to fully self-driving cars. Mobileye is already a significant player in this space. Before Tesla partnered with NVIDIA (NVDA 5.55%) for its Autopilot semi-autonomous driving system the electric automaker was using Mobileye's system.

While getting its processors into semi-autonomous vehicles is a great step for Intel, the company still has a long road ahead before it actually benefits from this market. Intel is still pivoting away from PC chip sales, and there's no guarantee that automakers will be banging down Intel's door for their autonomous driving chip needs.

Most of the news surrounding autonomous vehicle chips right now revolves around NVIDIA and how well its graphics processors interpret image information from sensors and help driverless cars understand what they're seeing. Audi is using NVIDIA's Drive PX 2 supercomputer for the A8, so there's evidence that Intel and NVIDIA can co-exist in the same semi-autonomous car. While that's good news for Intel it doesn't necessarily mean that automakers need Intel's processors for driverless cars -- and meanwhile, NVIDIA's graphics chips have so far proved very essential.

Intel investors should take the latest Audi news as a clear example that the company is making a serious pursuit of driverless car market, but it will need to make a lot more partnerships for this to become a real business. I wouldn't invest in Intel solely based on these initial moves, but the latest news is yet more evidence that Intel could eventually become a key player in the semi-autonomous market.