Later this month, Samsung (NASDAQOTH: SSNLF) is expected to unveil its next-generation flagship smartphone, presumably to be marketed as the Galaxy Note8.

The Note8 will come a year after Samsung launched its ill-fated Galaxy Note7 smartphone. In terms of hardware specifications, form factor, and features, the Note7 was well received, but a design defect that led the batteries inside the devices to explode ultimately forced the South Korean consumer-electronics giant to recall the phones. 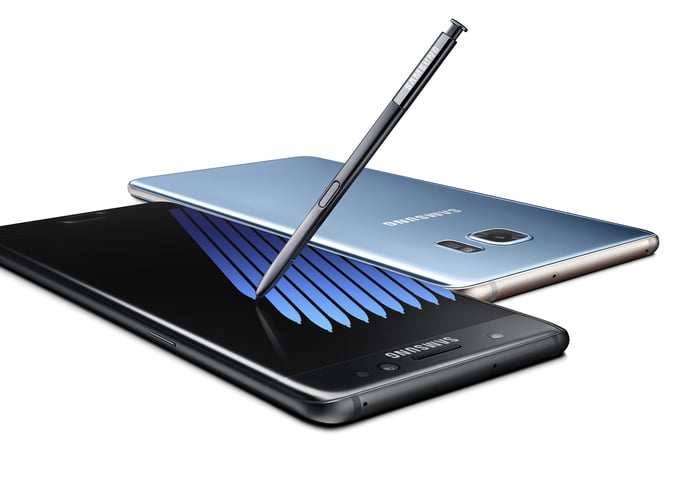 Getting down to business

According to noted leaker Evan Blass, writing for VentureBeat, here are the "final specs" of Samsung's upcoming Galaxy Note8.

The display itself will reportedly feature a display resolution of 2960 pixels by 1440 pixels, which, as Blass observes, is the same as the resolution of the displays found on the Galaxy S8 and Galaxy S8+.

In terms of internal specifications, Blass says the new phones will come with either Samsung's Exynos 8895 or Qualcomm's (NASDAQ:QCOM) Snapdragon 835. Again, these were the same applications processors used in the Galaxy S8-series.

Fortunately for those who love beefier tech specs, Blass says the new smartphone will have 6GB of system memory -- a 50% bump from the 4GB found in the Galaxy S8 and Galaxy S8+.

Where the Note8 appears to offer a large improvement over the Galaxy S8 and S8+ series is in the camera subsystem. The Galaxy Note8, Blass explains, "has two main rear cameras, both featuring 12-megapixel sensors."

"The primary, wide-angle [lens] has an [f/1.7] aperture and dual-pixel autofocus, while the telephoto lens is [f/2.4] and enables a 2x optical zoom," the report says. "Both lenses are optically stabilized." The front-facing camera, Blass says, "features an eight-megapixel sensor and an [f/1.7] autofocus lens."

The Galaxy S8 and S8+ had only a single rear-facing camera lens.

The Galaxy Note8, according to Blass' description, sounds like a repackaging of the fundamental technologies from the Galaxy S8 series with a few new features of its own that should appeal to Samsung customers who have typically preferred the Galaxy Note products over the flagship Galaxy S products.

However, nothing is likely to be fundamentally groundbreaking about the new device, so I don't expect the launch of the device to perform miracles in boosting the financial performance of Samsung's mobile division, particularly since it's already doing pretty well in the market.

For what it's worth, Samsung said in its most recent earnings presentation that, during the second half of 2017, it hopes to "maintain solid sales of flagship products through the release of the new Note model and continuous global sales of the S8/S8+."