Starbucks Corporation (NASDAQ:SBUX) got pummeled last month after issuing a disappointing earnings report. The company missed revenue estimates and lowered its guidance for the second time this fiscal year as management adapts to slower traffic growth. Shares plunged 9.2% in the following session, its sharpest drop in two years. But the report may not have been the biggest news of the day out of the coffee giant.

Earlier in the afternoon, it said it would buy the remaining half of its East China joint venture, spending $1.3 billion to take it over. As a result, Starbucks is taking full control of 1,300 stores in three Chinese provinces. The company also reaffirmed its goal of opening 5,000 stores in Mainland China. In a related decision, Starbucks sold its half of its Taiwan joint venture for $175 million. 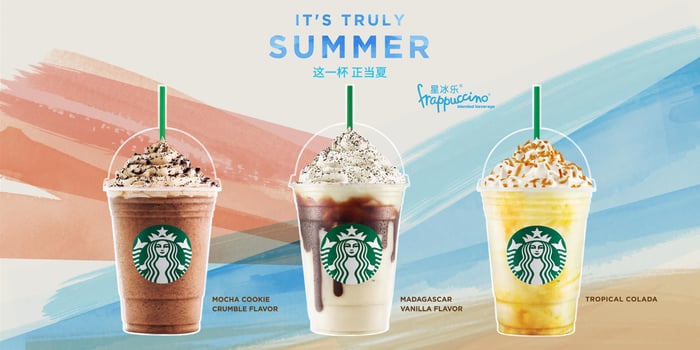 The move may be the surest sign yet that Starbucks sees China as its future. It already has 600 stores in Shanghai, more than in any other city in the world, and the company will soon open its second-ever Reserve Roastery in the metropolis.

The coffee chain is adding 500 stores a year in China, or more than one a day, and expects to have 5,000 in the country by 2021, up from 2,800. Chairman Howard Schlutz has said he believes the Chinese market will one day be bigger than the American one.

Let's take a closer look why the company is leaning on China more than ever before.

An undeniable record of success

Starbucks has broken through in China in a way that few American brands have. While tech companies have struggled with censorship issues and restaurant chains like McDonald's and Yum! Brands have backed away, respectively refranchising stores and spinning off Chinese operations, Starbucks continues to grow like a weed.

The coffee took advantage of China's culture of conspicuous consumption by positioning itself as an upscale brand, but also made specific changes to adapt to the Chinese market. It made stores larger to accommodate meetings and dining inside the cafe, which is more popular there, and has paid employees better than its peers in addition to offering benefits rare for restaurant-level workers.

The java giant has also leveraged its digital platform, in part with the internet value-added service provider Tencent Holdings (OTC: TCEHY), which has processed more than 2 million social media Starbucks gift transactions in the last six months -- making Starbucks almost its own currency.

While concerns have mounted about Starbucks' comparable sales growth in the U.S., China remains strong, increasing 7% in the most recent quarter. Over the last five years, comparable sales in the China/Asia Pacific region increased by more than 8% on average.

China is the world's most populous country and its second biggest economy, with a growth rate of around 7% a year. It's on its way to being the world's biggest consumer market, and already is in some important categories. China now has more movie theater screens than the U.S., and is expected to top the U.S. in box office receipts within two years.

It's also the world's largest smartphone market, and is expected to become the world's #2 wine market, even though the country is not generally known for alcohol consumption. The booming middle class is driving growth of these classic symbols of American consumerism and prosperity, and Starbucks is likely to follow in their wake.

Management spent much of the recent earnings call touting the opportunity in China, noting that the newest stores are delivering record unit volumes and world-leading returns. In the third quarter, operating margin in China/Asia Pacific surpassed that of the Americas at 26.6% to 24.4%.

Revenue from the region is only about fifth of revenue from the Americas, but that should surge once the East China JV deal closes, which is expected by early next year.

Howard Schultz has said he doesn't know how big the company can get in China, but topping the U.S. in store count would mean opening at least another 10,000 locations in the country. With a growth path like that ahead of it, it seems like a mistake to bet against the coffee king, even if recent results have disappointed.