In the decade after its IPO on Nov. 18, 2005, Under Amour's (NYSE:UAA) (NYSE:UA) stock was an investor's dream, rising as much as 15 times in value during that time. In the years since, though, it's been more of a nightmare, as the athletic apparel company's stock price has been cut in half as growth has slowed.

While bulls like myself believe Under Armour's underlying business remains strong and that long-term investors will eventually be rewarded for holding on to their shares, the bears would argue that more pain lies ahead for the company and its shareholders.

Yet even if you're the most adamant bull -- or ardent bear -- it's important to study the threats that could derail your investments. That way, you won't be blindsided by them, and you can identify the key trends you should be watching. On that note, here are the three major bear arguments against Under Armour.

Here's what the bears would say about Under Armour. Image source: Getty Images.

Several factors are contributing to the slowdown. One of the most significant is the distribution Under Armour has lost due to the carnage that has befallen upon the retail sector in recent quarters. Sporting goods giant Sports Authority filed for bankruptcy in 2016, and in the process, Under Armour lost an important retail partner and a major source of distribution for its products. Other retailers such as Dick's Sporting Goods have largely failed to pick up the slack and are struggling with slowing sales of their own as consumers continue to shift their purchases to the Internet.

Another factor that's weighing on sales is CEO Kevin Plank's praise of President Trump in early February. During a CNBC interview, Plank said, "to have such a pro-business president is something that is a real asset for the country." The comment ignited a backlash among consumers and several of Under Armour's most important celebrity endorsers, including Steph Curry, Dwayne "The Rock" Johnson, and Misty Copeland. Plank took out a full-page ad in The Baltimore Sun shortly thereafter in an attempt to clarify his comments and mitigate the damage, but Under Armour's brand is widely believed to have taken a hit from the incident.

Perhaps most troubling of all is a recent survey by research firm Piper Jaffray, which shows that Under Armour is losing relevance among U.S. teenagers. As my colleague Jeremy Bowman notes, Under Armour fell out of the top 10 in both footwear and apparel among the 5,500 teens surveyed -- a major blow for a brand that has long focused on younger Americans. Worse still, Under Armour was No. 1 among upper-income male teens in brands they've stopped wearing. At the same time, rival Nike (NYSE:NKE) has never been more popular among this key demographic; 31% of teens listed Nike as their top clothing brand -- up from 21% in last year's survey -- and 52% named it their top footwear choice, an all-time high for the sports apparel titan. These trends could foretell more poor sales results in the years ahead for Under Armour.

As revenue growth has slowed, Under Armour's profit margins have also come under pressure. After more than a decade of strong growth, Under Armour's continued ascent would require it to take meaningful share from industry titans Nike and Adidas (OTC:ADDYY). That's a particularly difficult challenge now that Under Armour has come to rely on its footwear business to drive growth, as this is a market long dominated by Nike, as well as one that's become a stronghold for a recently resurgent Adidas.

As part of its strategy to take on its larger rivals, Under Armour has ramped up its spending on celebrity endorsers, product development, and marketing -- all of which has dented operating margins in recent years. 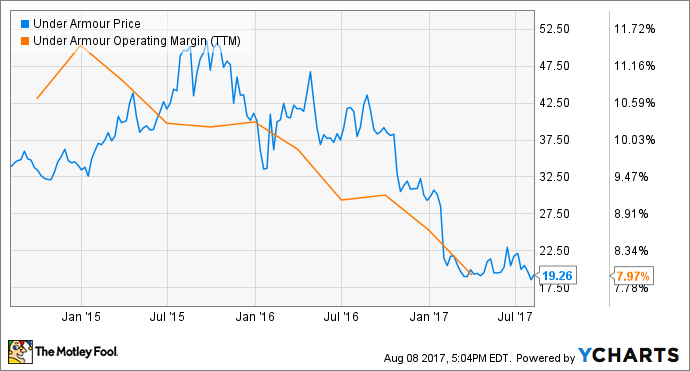 Under Armour hopes that charging higher prices for its high-end products can help to offset these trends, but the company's ultra-premium items -- such as $1,500 trench coats -- have not had fared well. Moreover, as a general practice, raising prices could drive customers to Under Armour's competitors and further reduce sales.

Even after the recent plunge in its share price -- and despite its slowing revenue growth and declining margins -- Under Armour remains a high-priced stock. Its A and C shares trade for about 49 and 43 times trailing earnings, respectively. That's significantly higher than the 24 and 35 P/E multiples that Nike and Adidas are currently fetching, as well as the industry average P/E of 23 for footwear and apparel companies. As such, Under Armour's premium valuation could leave more room for further stock price declines.

Counter arguments from a bull

Still, all is not as hopeless as the bears would have you believe. While Under Armour certainly faces some difficult challenges, there are ways it can right the ship. Stay tuned for an article describing three ways Under Armour's stock can rebound in the coming quarters.