The fitness wearables company, Fitbit (NYSE:FIT) released second quarter earnings earlier this month and seems to be showing some signs of life. While there were a number of topics covered in the earnings call, the key takeaways for investors are product sales are improving, the smartwatch will be released for the holiday season this year, and the company is on track to meet its expense management goals for the year.

Fitbit reported it sold 3.4 million devices in Q2 which was a 14% increase from Q1. While this might not seem overly impressive, this was a better than expected increase and it came while the company has been focusing on reducing channel inventory -- product sitting idly on retailers shelves not yet sold. Fitbit's channel inventory issues date bate to the company's disappointing 2016 holiday season.

What makes this improvement in device sales even more impressive is that the growth wasn't fueled by a set of new products or extra marketing spend. The only new product the company released in the first half was the Alta HR which wasn't even a new form factor. The Alta device was released in February 2016 and this new version just added the heart rate tracking feature.

Management added that its Charge 2 remains the number one selling fitness tracker in the U.S. and the Fitbit Blaze was voted number one by enterprise customers. But the company knows that it is missing out on the $10 billion-plus smartwatch market, and it is finally planning to release its smartwatch for the holiday season this year. 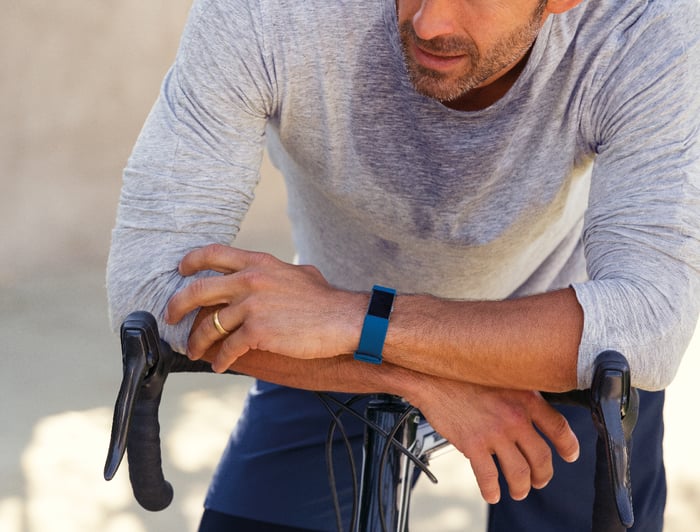 Fitbit has been buying smartwatch assets and management has talked up the features of its not-yet-released smartwatch for some time now, but reports have been that its development has been plagued with problems. Management has laid all the rumors to rest in its most recent call, the smartwatch will be available for the holiday season. James Park, CEO, talked about the key features of the first Fitbit smartwatch.

Our upcoming smartwatch device will deliver a combination of features that consumers have not yet seen in a smartwatch, including a health and fitness-first focus, cross-platform compatibility, water resistance to 50 meters, industry-leading GPS tracking and an easy-to-use software developer kit that will enable innovation and deeper connections to the healthcare system. All of this will come with multi-day battery life at an attractive price.

Fitbit is projecting 2017 full year revenue to be $1.55 billion to $1.7 billion which would be a 44% to 58% increase from last year. Bill Zarella, Fitbit's chief financial officer, confirmed that the revenue guidance included the smartwatch and he was "very comfortable" with the assumptions the company used for the smartwatch unit and revenue projections.

While the top line seems to be improving, Fitbit lost money in the most recent quarter and is focused on expense management to help the bottom line.

After the company's disastrous fourth quarter last year, management put a plan in place to cut expenses to "align with current revenue forecasts." This plan resulted in a layoff of 107 employees and cutting marketing spend.

Marketing expenses this quarter were 16% lower than Q2 last year due to supporting only one new product versus two and pushing costs to the second half of the year in anticipation of the smartwatch launch. While R&D expenses remain flat year-over-year, general and administrative costs increased by $4.9 million to support infrastructure costs to scale its global business and higher legal expenses. Overall, Zarella confirmed that operating expenses have trended below the forecasted run rate for the year and he feels "confident about delivering our targeted expense guidance."

While 2017 is a rebuilding year for Fitbit, it's nice to see some top line growth, line of sight to a long anticipated smartwatch, and confirmation that the company is meeting its committed expense targets. Investors have been burned before with management missing its commitments, so I wouldn't blame those who are skeptical and are taking a "show me" approach to this stock. But for me, I'm cautiously optimistic Fitbit is doing the right things to get back to growing its business.