In a previous article, I laid out the bear case against Under Armour (NYSE:UAA) (NYSE:UA). Today, let's take a look at some ways the sports apparel company's stock can recover from the beating it's taken over the past year. 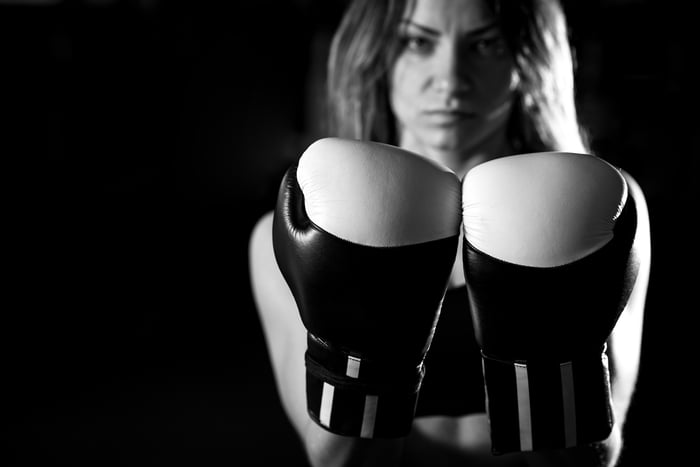 Under Armour may have gotten knocked down, but it still has plenty of fight left in it. Image source: Getty Images.

Under Armour is intensely focused on growing its online operations. In fact, CEO Kevin Plank has said, "I don't know if anyone can imagine that they can put enough money toward their digital businesses today."

That's a wise move, as the struggles of its brick-and-mortar retail partners have weighed on Under Armour's sales in recent quarters. The company is still recovering from Sport's Authority's bankruptcy in 2016, and it can't rely on its other traditional retail partners to make up the slack (though a new distribution deal with Kohl's looks promising).

Under Armour's best option, then, is to grow its direct-to-consumer business. Its DTC revenue -- which includes its own branded retail stores and e-commerce operations -- jumped 27% to $1.5 billion last year, and accounted for 31% of Under Armour's total revenue. And even as UA's wholesale revenue rose only 3% to $655 million in the second quarter -- due in part to the difficulties of traditional retailers mentioned previously -- DTC sales leapt 20% to $386 million.

If Under Armour can continue to grow its DTC business -- and particularly its e-commerce operations -- it could go a long way toward helping it overcome its slowing wholesale growth.

Another intriguing growth driver resides in Under Armour's non-U.S. markets. International sales surged 63% to $740 million in 2016, representing 15% of UA's total sales. That figure rose to 22% in the second quarter, as UA's international growth was again strong at 57%, while its sales in North America inched up only 0.3%. Yet at still less than a quarter of its total revenue -- compared to more than 50% for industry titan Nike (NYSE:NKE) -- international sales remain a sizable growth opportunity for Under Armour. In fact, it's possible that UA's international business could one day eclipse its $4 billion in annual North American sales.

At the very least, surging international sales should help to offset what have recently been slowing U.S. growth. Notably, UA's second-quarter sales increased 57% in EMEA (Europe, Middle East, and Africa) and 89% in its Asia-Pacific segment. Investors should expect more of the same in the quarters ahead, as massive emerging economies such as China still rank as some of UA's smallest markets. In this regard, it's important for investors to understand that although Under Armour is by now a well-known brand in the U.S., it's still a relatively small athletic apparel company on a global basis -- and therein lies its opportunity for growth.

In addition to its DTC and international operations, Under Armour has several other high-potential growth opportunities. Perhaps most promising is its entrance into the fast-growing and already more than $12.5 billion athleisure market. Athleisure sales currently make up only a minuscule portion of Under Armour's sales, compared to more than 25% for Nike and Adidas.

Management is also excited about its connected fitness business, which at only about 2% of total revenue is a small part of Under Armour's business. But while some analysts question the wisdom of UA's aggressive investments in this area, Plank believes that the data the company collects through its suite of apps will help to provide valuable insights into the needs and habits of its users, thereby providing Under Armour with a competitive edge over less tech-savvy rivals. In fact, Plank has said that connected fitness technology will "fundamentally affect global health," and he predicts there will be 50 billion retail items with connected chips in them by 2020. If he is correct, Under Armour's large bet on connected fitness could give it an early lead in what could ultimately become a massive new market.