There has been a prevailing concern among retailers in general, and Wal-Mart Stores (NYSE:WMT) in particular, that competition from e-commerce juggernaut Amazon.com (NASDAQ:AMZN) would be the death of the American retailer. Wal-Mart has been on the defensive as more and more consumers opt for the ease and convenience of online shopping.

When Wal-Mart reported its financial results, investors were looking for signs that the world's largest retailer could meet the challenges presented by the shift in consumer behavior. As it turns outs, the company showed that its strategy is bearing fruit.

In the just completed quarter, Wal-Mart produced revenue of $123.4 billion, an increase of 2.1% over the prior year quarter, and comparable sales that increased 1.8% year over year, prompted by a 1.3% increase in foot traffic. Those increases came at a cost, however, as competition in groceries led to discounting, causing operating income to fall 3.2% as a result.

Wal-Mart has increasingly focused its efforts on building out its online sales, while leveraging physical stores to its advantage. One example is the company's offer of free shipping on orders that exceed $35 and discounts for items not offered in stores that can be ordered online and scheduled for in-store pickup.

There are signs that these efforts are paying off, as the headline of Wal-Mart's financial report was the massive increase in e-commerce sales, which grew by 60% year over year, with gross merchandise volume increasing 67% over the prior-year quarter.

Building out its digital presence

Wal-Mart has been beefing up its e-commerce capabilities, starting with the acquisition of online retailer Jet.com for $3.3 billion last year and the appointment of founder Marc Lore as its head of e-commerce. That move was followed by a flurry of smaller purchases earlier this year that included outdoor retailer Moosejaw, women's clothier Modcloth, and men's clothing company Bonobos.

These acquisitions have been part of a major effort by Wal-Mart to transform its online strategy and become a meaningful competitor in the world of e-commerce. The motivation behind several recent purchases may offer the most insight into Wal-Mart's ultimate strategy.

Combining the old and the new

High-end men's apparel purveyor Bonobos is renowned for its seamless integration of online and physical retail stores, focus on customer service, and its minimalist retail footprint. Smaller locations in major cities allow customers to try on garments that are later drop shipped. Wal-Mart gained access not only to more affluent shoppers but the expertise in creating a hybrid business model that combines physical and digital retail. 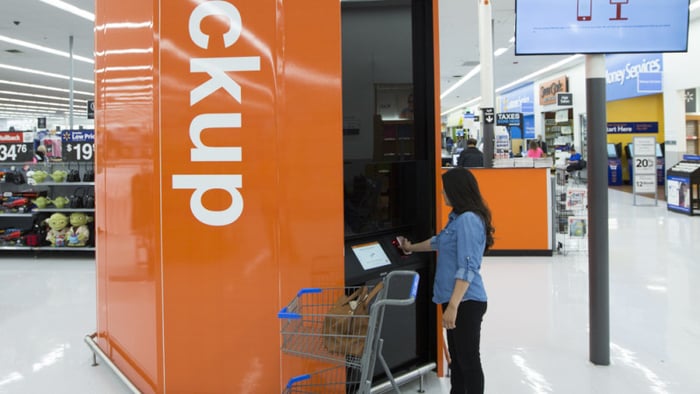 Walmart's Pickup program allows customers to order products online and have them ready for pickup in stores. Image source: Wal-Mart.

When executive Marc Lore sold Jet.com to Wal-Mart, his brainchild was expanding quickly but had yet to produce a profit. His mandate to quickly ramp up the company's e-commerce strategy has given birth to a new emphasis on meeting the customers where they are.

He instituted Pickup, which allows customers to order from over a million of the company's most popular items on the website for in-store pickup. Many of those items are available on the same day, and Lore notes that 90% of Americans live within 10 miles of a Walmart store, offering speed and convenience.

It ain't over yet

The story of e-commerce is still in its early chapters, as online sales accounted for only 8.2% of total U.S. retail sales for the quarter ended June 2017. While Amazon has been the primary beneficiary of the shift to online sales, Wal-Mart's recent results show that there's room for more than one winner in the space.

The company is developing a blueprint for how to compete in an Amazon-centric world: a multi-channel presence that combines the ease of online shopping with the advantages gained by a large physical store presence. Add an extreme focus on customer service, an eye toward convenience, and a variety of pickup and delivery options, and Wal-Mart may have the template needed to actually thrive in the digital economy.