The easiest, and often best, way to invest is to buy a company and hold it long term. And if you're holding a stock for the next 50 years, that's very, very long term.

We asked three Motley Fool investors what stock they would want to own into 2067, and they think Aqua America Inc (NYSE:WTRG), Facebook Inc (NASDAQ:FB), and Walt Disney Co (NYSE:DIS) are all built to last for at least the next five decades. 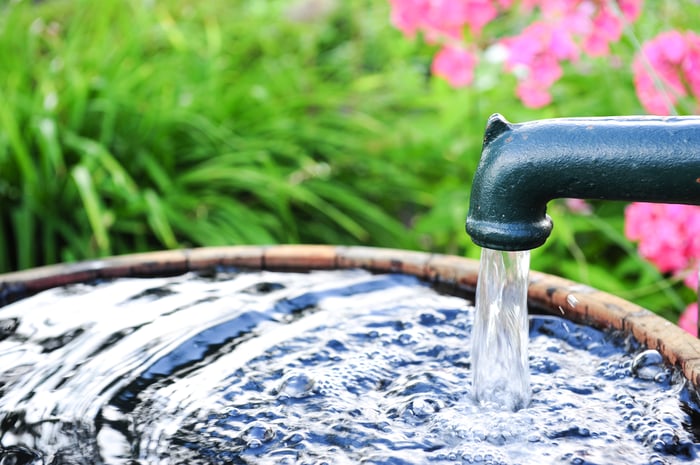 An everlasting fount of dividends

Rich Smith: (Aqua America): The thing about investing in stocks to hold for 50 years or more is that over a timespan that long, the price you pay today becomes (almost) irrelevant. Think about it.

Anyone who insisted on waiting for Coke to come down a couple of cents so they could buy it at a better price risked losing an enormous profit if the stock stubbornly refused to become cheaper. (And in fact, it took about seven years -- from 1967 to 1974 -- for Coke to drop below $0.64).

That's how I think about Aqua America stock today. On its face, Aqua America -- the No. 2 U.S. water utility after American Water Works -- looks awfully expensive to me today at a price of nearly 26 times earnings. Analysts don't expect Aqua America to grow its earnings very fast -- just 5.5% annually over the next five years. That said, so long as the human body is made up of 60% water, I don't see mankind's need for water ending anytime soon. This, to me, is a pretty strong guarantee that Aqua America's products will remain in demand for decades to come -- or at least until evolution changes our collective biochemistry pretty significantly.

Meanwhile, in its defense, Aqua America remains the cheapest of the three big water stocks . It's posted the fastest earnings growth over the past five years and the second-fastest revenue growth -- and it pays the best dividend of the bunch, a respectable 2.4% yield. That dividend is also very sustainable, accounting for less than 60% of the profits Aqua America makes in a year.

Long story short, while I can't say I like the stock's valuation in the short term, for anyone with a 50-year investing horizon, I expect that an investment in Aqua America will work out just fine.

Dan Caplinger (Facebook): Social media, at first, looked like the catalyst for the next tech-stock bubble, as investors sought to cash in on the rising social phenomenon to justify the proliferation of mobile devices. Yet Facebook proved that once the social media giant built a platform, users came, and they've willingly contributed their time to consuming the news, information, and advertisements that the service has increasingly sought to put in front of them. Facebook has gone a long way toward producing an all-encompassing ecosystem that has forced many consumer-facing companies to embrace the social-media company, further enhancing its network effect.

Some investors fear that Facebook is now out of style among the younger users who will define the growth of the company over the next 50 years. But Facebook isn't blind to those trends, and strategic moves, like purchasing Instagram, WhatsApp, and virtual-reality specialist Oculus should keep the social-media leader moving forward.

International expansion is also a huge opportunity, with much of the globe's population still lacking the full opportunity to come into Facebook's reach. With an emphasis on innovation and a fierce competitive spirit, Facebook won't be satisfied until it has captured the entire world within its network's grip, and CEO Mark Zuckerberg and his team have the drive and ambition to achieve that goal in the next half-century.

The house of mouse is built to last

Travis Hoium (Disney): We don't know much about what the world will look like in 50 years, but I'm willing to bet that entertainment -- whatever form it takes -- will be an important part of society, just as it is today. Disney has some of the best assets for storytelling in Marvel, Pixar, and Star Wars franchises. The company has been able to reinvigorate many of those after acquiring them, in some cases, 40 or 50 years after they were invented.

Not only does Disney have a powerful studio business that will be able to reach customers whether they're in movie theaters, on cable TV, streaming content, or in a future VR headset, but the company's parks business shouldn't go underappreciated. Parks give Disney another reliable revenue stream for its content, and it will arguably be more reliable in the next decade than an aging staple like cable TV and ESPN have been. As a data point, in the fiscal third quarter of 2017, Disney's parks business grew 12%, to $4.89 billion in revenue, and media-network revenue fell 1%, to $5.97 billion.

Disney has managed to be one of the most successful studios in history by developing innovative content and acquiring new content when it needs to. That's a recipe for success whether you're viewing Disney's content on a TV, streaming app, VR headset, or at a theme park. And I'll bet the company will be a profitable entertainment icon 50 years from now, too.