Shares of AeroVironment Inc. (NASDAQ:AVAV) were up 18.9% as of 1:30 p.m. EDT Wednesday after the unmanned aircraft systems specialist announced strong fiscal first-quarter 2018 results.

More specifically -- and noting the fiscal first quarter is its lightest in terms of sales and profits -- AeroVironment's quarterly revenue climbed 21% year over year to $43.8 million, or near the high end of its guidance for revenue of $40 million to $44 million. On the bottom line, that translated to a net loss of $4.4 million, or $0.19 per share, narrowed from a loss of $11.6 million, or $0.51 per share in the same year-ago period. Here again, that was significantly ahead of guidance for a per-share loss of $0.32 to $0.40. 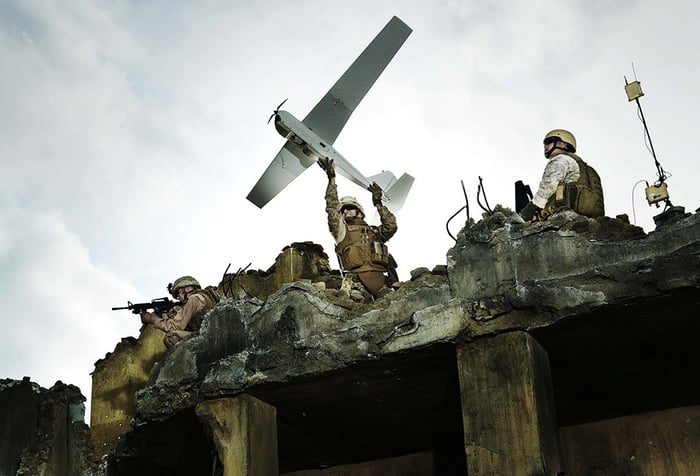 In addition, AeroVironment's funded backlog at quarter's end climbed 9.4% sequentially to $85.3 million, offering the company a welcome boost in visibility for the rest of the year.

AeroVironment reiterated its previous guidance for full fiscal-year revenue between $280 million and $300 million, and for earnings per diluted share of between $0.45 and $0.65. That said, it seemed management was exercising caution as they looked forward; Nawabi elaborated during the subsequent conference call that operating expenses are set to increase for the remainder of the year, and revenue mix tends to shift along with the timing of various contracts.

Nonetheless, this was a great quarter from AeroVironment, with little not to like from an investor's perspective. I think the market is right to so ferociously bid up the stock in response today.