In the last several months, value investors looking for strong dividend yields have seen Detroit-based giant General Motors (NYSE:GM) turn up more frequently in their searches. With a 4.3% dividend yield at current prices, and what looks at first glance to be strong profitability, it seems like GM might be worth some investigation.

Is that true of General Motors? Let's take a look. 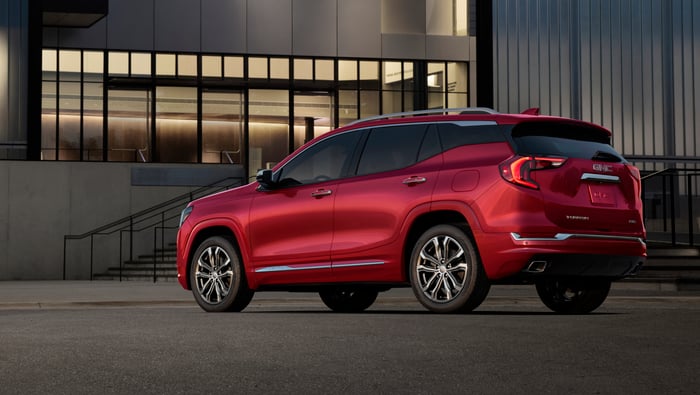 GM is in the process of launching all-new crossover SUVs. It expects those new models to boost its profitability even as the overall new-car market softens. But investors seem unconvinced. Image source: General Motors.

GM isn't in crisis, but there are two reasons for concern

I'm going to start by spoiling the ending: General Motors isn't really "in trouble." In fact, it's quite healthy, especially by historical standards. Its product quality is high, sales and profitability have been good, earnings have been strong over the last two years, and its balance sheet is in very good shape.

But GM is currently trading at just six times its expected 2017 earnings, suggesting that investors have been concerned. Here's how GM's shares have performed since the beginning of 2014. 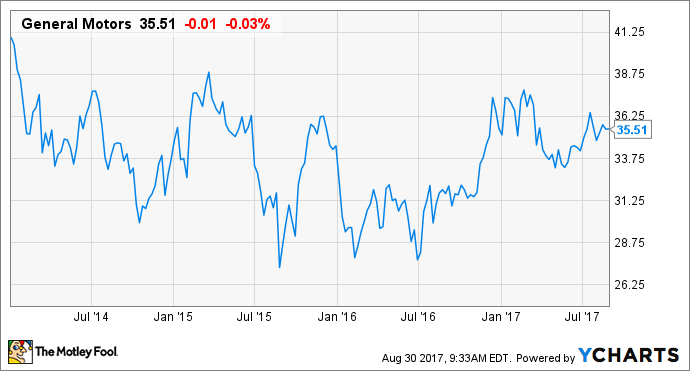 As you can see, there have been a lot of ups and downs, but more downs than ups. GM's share price is down a little over 13% over the period. We can blame GM's recall disaster for the big drop in the early part of 2014, but that's old news now. Why hasn't it recovered?

The truth is that there are two reasons why investors have been leery of GM.

Companies like Tesla, Uber Technologies, and Alphabet's Waymo self-driving unit are bringing new technologies and new models of "mobility" to market. That has led to two related concerns:

Both have some validity. In fact, it's probably fair to say that not all of the old automakers will survive these technological transformations. But CEO Mary Barra has GM way out in front of most:

To sum up: Disruption is a concern, but it's less of a concern for GM than for most of its peers. CEO Mary Barra, shown here with a prototype self-driving Chevrolet Bolt, has GM out in front of the technologies likely to disrupt the traditional auto business. Image source: General Motors.

This is a near-term concern, but it has almost certainly put substantial pressure on GM's share price: Auto sales are cyclical, and the current cycle -- at least in the U.S., and possibly in China as well -- is likely past its cyclical peak.

Because automakers have high fixed costs, a drop in new-vehicle sales will have an outsized effect on profits. CFO Chuck Stevens recently explained that GM is well prepared for a downturn, and in some ways, the company is healthier than it has ever been. But he frankly acknowledged that GM's profits will shrink substantially in even a moderate U.S. recession.

That's not a mortal threat to GM. It has a substantial cash reserve intended to ensure that it can continue investing in new products and technologies through even an extended recession. And its profitability has improved substantially over the last few years: While GM historically swung to losses during recessions, it's possible that it will stay profitable next time around.

But there's no escaping the economic cycle: Sooner or later, the economy will head south, and GM's profits will shrink substantially. 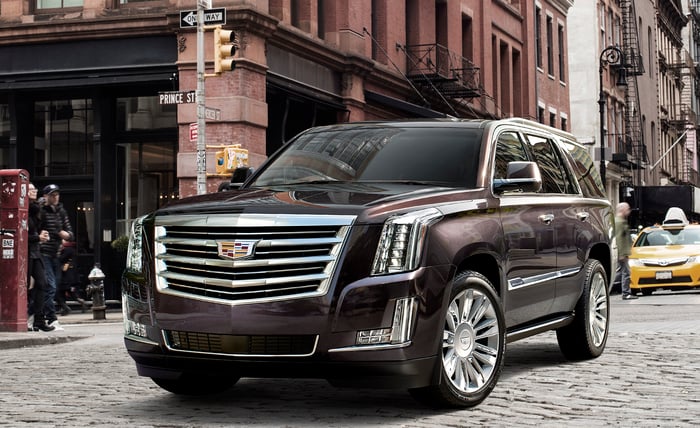 Loaded luxury models like GM's Cadillac Escalade SUV deliver huge profits per sale. But when consumers cut back during a recession, they can be hard to sell. Image source: General Motors.

So what about GM's dividend?

The truth is that GM's dividend isn't particularly high. Its yield is high because its valuation is low, for reasons mostly outside of its control. In fact, GM has kept its dividend stable even during very good years, choosing to return additional excess cash to shareholders via share repurchases instead.

Why? So it doesn't have to cut the dividend when things start to turn. GM's plan is to maintain the dividend at current levels through a downturn as long as its cash balance is positive. (Its roughly $18 billion cash reserve is backstopped by a big line of credit, but it won't use the line of credit to pay dividends.)

Long story short: The disruption threat is still vague and probably overblown, at least when it comes to GM. The recession threat is real (it's inevitable), but unless it's a dire, protracted economic mess, GM is likely to sail through it. An investor who buys here and commits to reinvesting that dividend might need to be patient through a downturn, but could be very happy with the result once auto sales (and GM's profits and stock price) recover.