Market researcher IDC has put out its latest estimates on the wearables market for the second quarter, and consumer preferences continue to shift increasingly away from basic fitness trackers and toward smartwatches. It was an important inflection point for the market, as shipments of basic wearables fell for the first time ever (down 0.9%). Meanwhile, smartwatch volumes soared by 60.9%.

"The transition toward more intelligent and feature-filled wearables is in full swing," added IDC senior research analyst Jitesh Ubrani. "For years, rudimentary fitness trackers have acted as a gateway to smartwatches and now we're at a point where brands and consumers are graduating to a more sophisticated device." 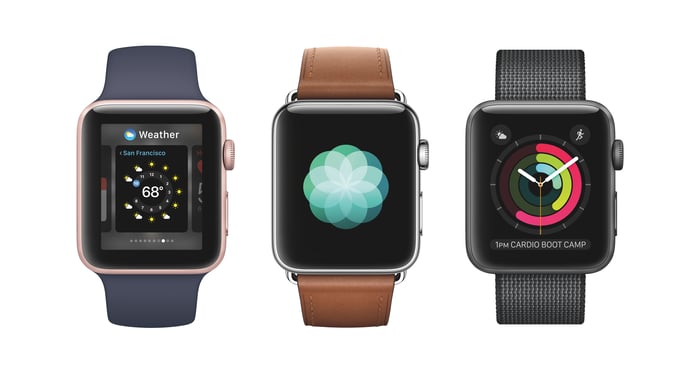 Similar to Strategy Analytics' Q2 estimates, Xiaomi took the top spot in the second quarter thanks to its low-cost fitness trackers that remain quite popular in China, somewhat bucking the industrywide trend. Here are the top five vendors, according to IDC:

Overall, the market grew 10.3% to 26.3 million units in the second quarter. It's helping that smartwatches are slowly moving to becoming stand-alone devices that don't necessarily rely on a smartphone for full functionality, in IDC's view. The market researcher also believes that the continued emphasis on fitness use cases is helping adoption, while smartwatches are also beginning to mature as a product category.

A tale of two smartwatch contenders

Fitbit's 41% decline in unit volumes in the second quarter was largely already disclosed when Fitbit reported earnings last month, but still goes to show how important its new Ionic smartwatch will be for the company's future. Last year was notably different, as smartwatch sales largely stalled, but this year is seeing preferences shift quickly -- adding even more pressure on Fitbit's ongoing transition. Ionic launches in October, and this holiday shopping season will be critical for Fitbit.

Apple Watch's performance has been a bit lumpy, in part due to the longer product cycles. The Mac maker enjoyed a 50% jump in unit volumes in the second quarter, which suggests that the updated Series 1 and Series 2 models that launched last fall are faring better than the first-generation model. Apple has also been actively courting corporate wellness and insurers, which could be helping prop up sales. Apple is expected to introduce a third-generation Apple Watch, presumably called Series 3, with cellular LTE connectivity at its product event on Sept. 12.

It looks like the two dominant smartwatch contenders over the holidays will be the Ionic and Apple Watch Series 3. Which will win over consumers?