Electric vehicles are the hot topic at this week's International Motor Show in Frankfurt, Germany, thanks in part to the challenge posed to the German luxury-car giants by upstart Tesla (NASDAQ:TSLA).

German giant Daimler AG (OTC:DDAI.F), the corporate parent of luxury-car maker Mercedes-Benz, showed off what could be an important future entry: an electric Mercedes-Benz small car.

Daimler executives didn't say for sure that the Concept EQA, as it's called, would go into production. But based on what we know about Mercedes' plans for a line of electric vehicles, it's a good bet that something like it will come to market in a few years. Here's what we know. 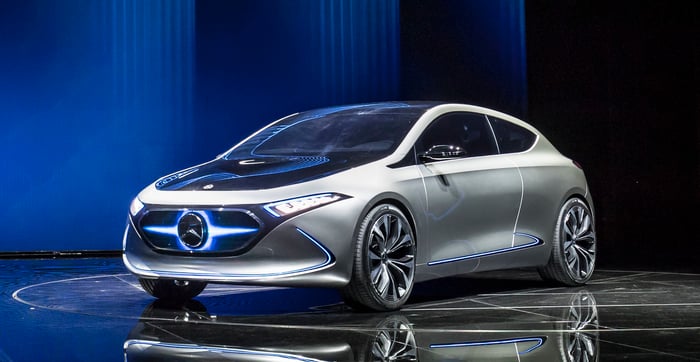 The Concept EQA is a small-but-premium electric hatchback. It's a dual-motor, all-wheel-drive battery-electric vehicle with a range of "around 400 kilometers" (248 miles), according to Mercedes-Benz.

Although Mercedes didn't announce plans for a production version, it's likely that the EQA foreshadows an "entry-level" model for Mercedes' forthcoming all-electric EQ sub-brand. The idea of an "entry-level" Mercedes-Benz might sound strange, but small-but-plush vehicles have become very important to the brand in recent years.

The Concept EQA shows how much fascination can fit into a compact car. It provides an example of how electric mobility might look like for our compact cars, because they are an important driver of our success. Around the world, many new customers have come to Mercedes-Benz through this vehicle segment. In Europe, the A-Class [a small hatchback] has a conquest rate of around 70 percent. In the USA, more than half of CLA [Mercedes' least-expensive sedan] owners are driving a Mercedes for the first time. And China is our biggest market for the GLA [a small SUV based on the CLA].

Long story short: Small cars are important for Mercedes-Benz because they bring new buyers to the brand. As Mercedes transitions to electric vehicles, a small electric model seems like a necessity. That's what the Concept EQA is previewing.

Daimler CEO Dieter Zetsche confirmed this week that Mercedes-Benz will offer electric versions of all of its models by 2022 and a new series of plug-in hybrids, for about 50 new "electrified" Mercedes-Benz models in total. In addition, Daimler's Smart small-car brand plans to eliminate internal-combustion models to become an all-electric brand.

At least part of that electrification effort will center on Mercedes' new electric-car sub-brand, called EQ. Mercedes confirmed this week that the first EQ model will be a version of the electric midsize SUV that it showed in concept form a year ago, to be called EQC. That vehicle will debut in 2019, and several more EQ models are expected to follow. 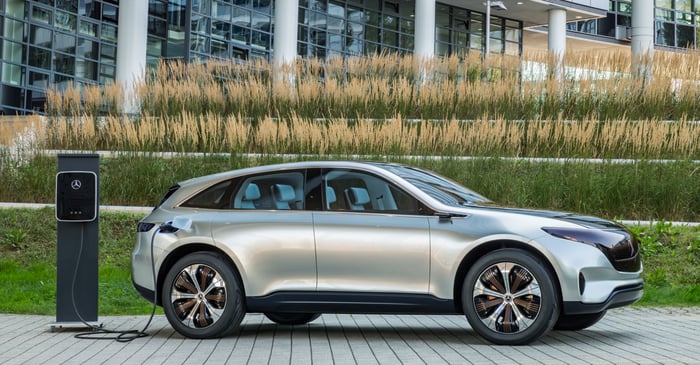 Mercedes' officials are very aware of the challenge posed by Tesla, of course. Unlike rivals BMW AG and Audi AG, which plan to take direct aim at the Silicon Valley contender, Mercedes seems to be aiming where Tesla isn't: The EQC could be calibrated to slot in between Tesla's Model X and its planned Model-3-based compact SUV, while the Concept EQA previews a car that would be smaller than anything Tesla has planned for the near future.

How Daimler will fund the electrification effort

Daimler, which also owns several truck brands and is working on a series of electric trucks for commercial use, plans to fund this aggressive electrification push largely through cost savings. CFO Frank Lindenberg said that Daimler has targeted $4.8 billion in cost cuts that should offset much of the cost.

Much, but not all: Daimler aims for a 10% operating profit margin, but Lindenberg acknowledged that a margin in the range of 8% to 10% was possible in the near term.

Long story short: While it's likely that electric vehicles will be more profitable for Daimler than internal-combustion models in the long term, the costs of the transition to an electric product line could squeeze its margins for a while.