Defense contractors have done well lately, responding to more favorable industry conditions both from a political standpoint and from the rise in the military threat level in recent years. Both General Dynamics (NYSE:GD) and Northrop Grumman (NYSE:NOC) have taken their share of projects resulting from the call for higher defense spending from the White House. Yet during the best of times, it's important to look closely at stocks to determine whether they have what it takes to survive the next cyclical downturn. Below, you'll find more in-depth discussion of General Dynamics and Northrop Grumman with the objective of seeing which one is a smarter pick right now.

Both General Dynamics and Northrop Grumman have done quite well over the past year. General Dynamics has a small lead over its defense rival, posting a 31% gain since September 2016 compared to Northrop's quite impressive 28% move higher.

Looking more closely at valuation, it's tough to distinguish the two defense contractors to a very large extent. Both stocks have a trailing earnings multiple of around 20 when you look at financials over the past 12 months. Even when you incorporate future expectations on the bottom line, the two stocks stay very close to each other, with General Dynamics trading at 19 times forward estimates compared to Northrop's figure of just under 20. On valuation and performance, General Dynamics and Northrop Grumman finish in a dead heat. 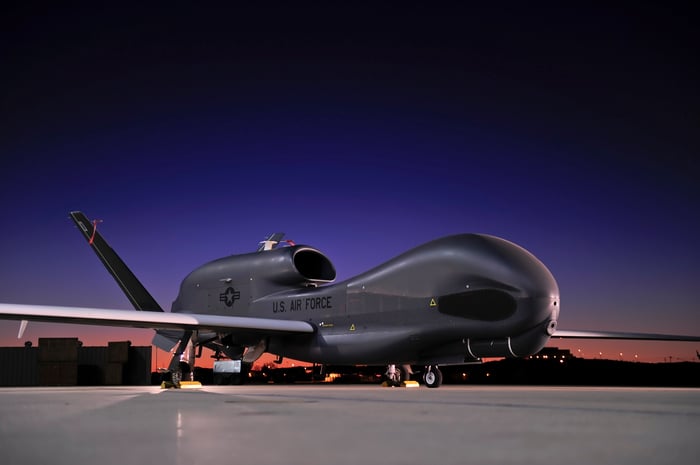 Income investors will also see dramatic similarities between the two stocks. General Dynamics has a slightly higher yield of 1.7%, but Northrop's 1.5% yield isn't too far behind and reflects the extent to which share-price gains have outpaced dividend growth recently.

Both General Dynamics and Northrop Grumman have also dedicated themselves to dividend growth. General Dynamics became a Dividend Aristocrat recently, and it has boosted payouts for 26 straight years now, including an 11% increase earlier in 2017. Northrop Grumman weighs in with a 14-year streak of its own, and it made its own 11% dividend hike in June to bring its quarterly payout to an even $1 per share. Yet neither stock pays out more than 30% of its earnings in the form of dividends, and that leaves both Northrop and General Dynamics with room for future dividend increases.

The defense industry has sported big share-price increases for most stocks in the sector, but fundamental performance has had more nuances. General Dynamics' most recent earnings report included an overall sales decline of 1%, led lower by particular weakness in the private aerospace and information systems and technology segments. Yet going beyond the top line, General Dynamics was more efficient at turning its sales into profits. Concerns about falling backlogs have some investors worried about long-term prospects for the company, but solid prospects in both the commercial and military business have prevented the stock from seeing more substantial declines.

Northrop Grumman has seen slightly more encouraging performance. Revenue climbed 6% in its most recent quarter compared to the year-earlier period, and that sent net profit higher by 7%. The aerospace systems business was the real standout segment, seeing revenue gain by 14%. The smaller mission systems and technology services segments had more mixed performance. Although, looking towards the bottom line, both businesses had more of a positive impact on operating income than aerospace. With prospects for future sales from autonomous systems, Northrop is positioning itself for the future quite nicely.

The two defense stocks are very close to each other from a fundamental business standpoint. Given its slightly more attractive growth profile, Northrop gets my vote for the better buy right now. However, those who see greater opportunity in General Dynamics' business focus areas should also do well.