Which of these two retail titans is the best choice for your portfolio?

Perhaps no two companies have helped to reshape the retail industry more than Wal-Mart Stores (WMT 0.86%) and Amazon.com (AMZN 3.15%). With its nearly $500 billion in annual revenue, Wal-Mart tops the Fortune Global 500 list for the world's largest corporations by revenue. And after two decades of torrid growth, Amazon is now the dominant online retailer.

As these companies have risen to power, they've earned a fortune for their investors along the way. But which is the better buy today? Let's find out. 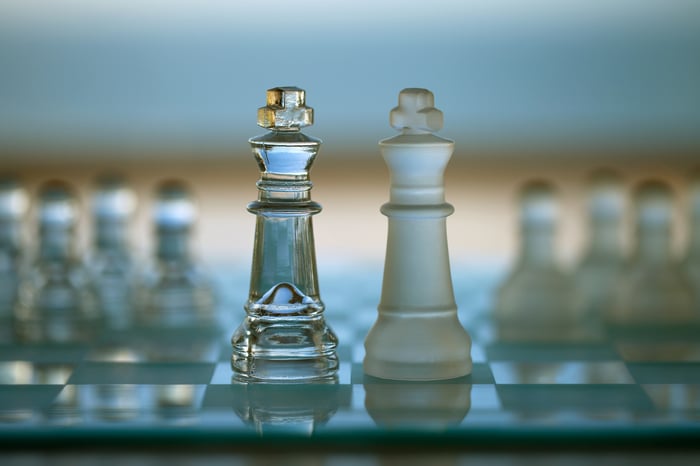 We pit these two retail kings against each other to see which is the better buy for your portfolio. Image source: Getty Images.

Amazon offers its customers a powerful value proposition built upon a wide selection of goods, low prices, and an ultra-convenient online shopping experience. Wal-Mart is perhaps the one retailer that can actually challenge Amazon in these areas. Wal-Mart also possesses a powerful competitive advantage of its own in its 11,600-strong store network. Its stores are located within five miles of 70% of the U.S. population, which positions them well for things like grocery pickup and e-commerce fulfillment support.

Yet there's one important area in which Amazon's competitive moat may be insurmountable even for Wal-Mart: online consumer mindshare. Fifty-five percent of consumers began their search on the e-commerce leader's website when shopping online in September 2016 -- up from 44% a year earlier -- according to a report (opens a PDF) by marketing firm BloomReach. All other retailers combined accounted for only 16% of shoppers' initial searches, with search engines making up the rest.

These results show that Amazon is often the first place people go to shop online. With more sales migrating to the internet every year, this is an extremely valuable position to be in -- and one that gives the e-commerce king the edge in terms of competitive advantage.

Amazon and Wal-Mart are both powerhouse businesses, but let's take a look at some key metrics to see how they stack up in regard to financial strength.

Though Wal-Mart is more indebted than Amazon, it also has six times the net income and twice the free cash flow. That gives the retail behemoth the edge in terms of financial fortitude.

When it comes to growth, this battle is particularly one-sided; Amazon's revenue and cash flow growth have dwarfed that of Wal-Mart over the past half-decade. 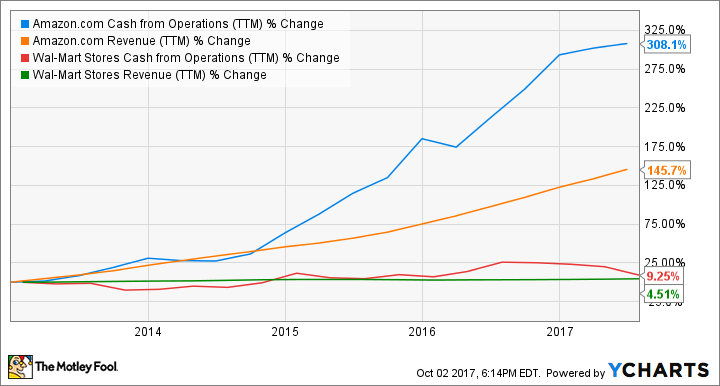 This trend should continue for the foreseeable future, with analysts forecasting that Amazon will grow its earnings per share at more than 50% annually over the next five years, compared to only about 5% for Wal-Mart. With its EPS expected to increase at a rate of approximately 10 times that of its rival, Amazon is simply in a different league in terms of growth.

No better-buy discussion should take place without a look at valuation. Let's check out some key value metrics for Amazon and Wal-Mart, including price-to-sales, price-to-earnings, and price-to-free-cash-flow ratios.

On all four metrics, Wal-Mart's shares are far less expensive than Amazon's. Even if we factor in Amazon's significantly higher expected growth rates, Wal-Mart's stock is still more attractively priced based on its price-to-earnings-to-growth, or PEG, ratio of 3.04, compared to 4.73 for Amazon. Thus, Wal-Mart is the better bargain.

With this better-buy showdown all tied up after four rounds, let's look at some additional aspects of these retail titans' businesses to help you decide what's best for your portfolio.

Income-seeking investors will likely appreciate Wal-Mart's 2.6% dividend yield and the nearly $8 billion in share buybacks it conducted over the past year. These capital returns help to support its stock price during periods of market distress, thereby making Wal-Mart a more defensive stock than Amazon, which does not pay a dividend.

Alternatively, growth investors may appreciate Amazon's relentless assaults on high-potential new markets. The e-commerce juggernaut is expanding aggressively in groceries, digital advertising, smart home technology, and esports, just to name a few. Most impressively, it's built a commanding lead in the massive cloud-computing infrastructure market with Amazon Web Services -- a business some analysts believe could be worth as much as $150 billion. This optionality in Amazon's business model -- and the company's innovative culture that allows it to constantly adapt to new trends -- make it a terrific growth stock for long-term investors.

Ultimately, you'll have to decide which of these factors is more important to you. If you're a value-focused dividend lover who appreciates a reliable cash-generator, then Wal-Mart is the way to go. If innovation, growth, and multiple potential futures are more up your alley, then Amazon is the better choice. Either way, you'll be buying an excellent business that should reward you handsomely in the years ahead.