Please ensure Javascript is enabled for purposes of website accessibility
Log In Help Join The Motley Fool
Free Article Join Over 1 Million Premium Members And Get More In-Depth Stock Guidance and Research
By Tim Brugger, Rich Smith, and Jeremy Bowman - Oct 6, 2017 at 10:33AM

The days of aggressive growth may be behind the beverage innovator, but other companies are on the cusp of mirroring its performance from way back when.

In recent years, Coca Cola's (KO 2.34%) stock performance has been steady, though not as explosive as it was in the late 1980s and early '90s. We asked three Fool investors which stocks are poised for takeoff in today's market, just like Coca-Cola was nearly three decades ago. Here's why they picked cloud leader Microsoft (MSFT 1.07%), automotive mainstay General Motors (GM 1.35%), and coffee innovator Starbucks (SBUX 3.76%).

Jeremy Bowman (Starbucks): In 1988, Coca-Cola reigned supreme in the U.S. The stock had long been a winner, but it surged through the 1990s as the company expanded around the world, riding a wave of optimism over a newly global economy.

Today, the company that most resembles Coca-Cola is Starbucks Corporation. Starbucks is a global giant, but it still has plenty of avenues of growth that should fuel the stock for years to come.

The coffeehouse chain has won over the Chinese market, and plans to open 500 stores in China annually over the next five years. Chairman Howard Schultz has said he believes that Starbucks would one day have more stores in China than it does in the U.S.

Meanwhile, the company's digital initiatives have been popular: Its Mobile Order & Pay tool is now the basis for 9% of U.S. transactions. It could also lead to future extensions such as delivery.

And Starbucks' move upscale through its Reserve stores and 20 to 30 planned Roastery locations around the world will gave the company an additional revenue stream, and provide a halo effect for the brand as a whole.

Starbucks might be following in Coca-Cola's footsteps, as it has taken steps that could eventually lead it to become a Dividend Aristocrat. It first paid a dividend in 2010 and has raised it by 20% or more every year since. Starbucks offers a 1.9% yield today, and should raise its payout when it reports earnings later this month.

With a dominant brand in beverages, healthy profit margins, and promising growth, Starbucks in many ways is what Coca-Cola was a generation ago. 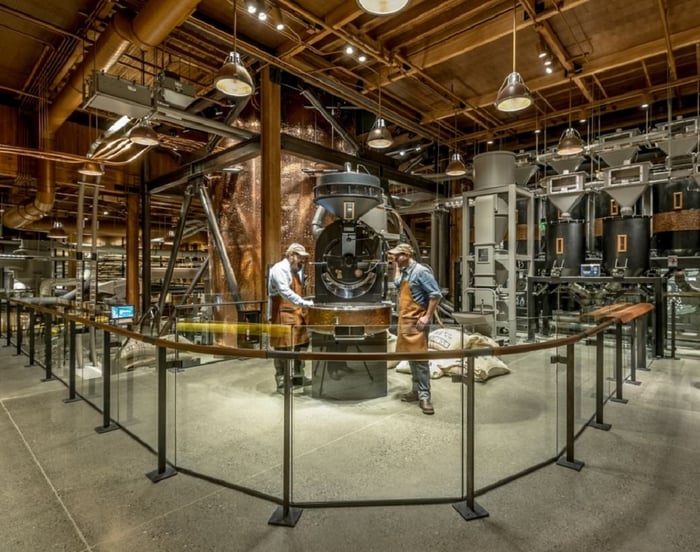 Back, and better than ever

Tim Brugger (Microsoft): Coke was the real thing in the late '80s, but once it started expanding its product line, the company really took off -- and has performed steadily since. Though the two companies are in different industries, there are some similarities between the Microsoft of today and the Coca-Cola of yesteryear.

Microsoft's 2.22% dividend yield doesn't match Coke's 3.24%, but it is poised to take off. Considering its outstanding financial results and leadership position in several cutting-edge markets, the best is yet to come for Microsoft shareholders well into the 2020s.

Led by its dominant cloud services and platform revenue, Microsoft reported 2017 fourth-quarter revenue of $23.32 billion, a 13% increase over fiscal 2016's fourth quarter. For the year, Microsoft's $96.66 billion was a 5% improvement. Based on last quarter's revenue jump, Microsoft is picking up steam.

The momentum Microsoft is gaining in the cloud -- its annual run rate was over $18.9 billion last quarter -- is driving sales across the board. Microsoft's Azure cloud platform skyrocketed 97% in the fourth quarter, and its mainstay commercial Office 365 -- delivered via the cloud -- jumped 43%. The once-beleaguered Dynamics 365 customer relationship management system is also benefiting from Microsoft's cloud leadership with sales climbing 74%.

As good as Microsoft's stock performance has been lately, it's just the tip of the iceberg as the software giant steadily becomes the vendor of choice in some the world's fastest-growing markets. Microsoft shareholders could end up smiling all the way to the bank for years to come.

Invest in a classic

How good of a result is that? Some might point out that growing an investment from $1 billion to $12 billion in 29 years works out to only a 9% compounded return -- below the stock market's long-term average annualized return of 10%. But here's the thing: From October 1988 to October 2017, the S&P 500 actually rose only from about 278 to 2,537.74. That's a ninefold increase in stock market value.

But Warren Buffett's stake in Coke is up 12-fold.

That just goes to show you that a stock supported by a great brand name, even if it doesn't grow like wildfire in the years after you buy it, can still handily outperform the market. What other great brands do we know of that could perform similarly? Well, how about starting with another well-known Buffett holding: General Motors.

Like Coca-Cola, GM has well-known brand names, even if few analysts expect it to grow very fast here at the cyclical automotive peak. Like Coke, GM is a strong dividend-paying stock, yielding 3.6% at last count, versus Coke's 3.3% dividend yield. (And, with a payout ratio of less than 24%, GM's dividend yield is probably more sustainable.)

GM stock is also incredibly cheap relative to Coke stock, selling for less than eight times earnings versus Coke's P/E ratio of forty-eight. At a price this cheap, I can't see how GM could fail to outperform the market from here on out -- and maybe even outperform Coke stock itself.