Micron Technology (NASDAQ:MU) has enjoyed great success over the past year. Weak memory-industry supply has boosted pricing, with original equipment manufacturers (OEMs) of consumer electronics such as smartphones and PCs forced to lock in the available supply at higher prices.

But Micron can't expect to ride the wave of higher memory prices forever given the cyclical nature of the industry. The chipmaker has been through difficult times when memory prices were low, so it needs to find alternate avenues to push sales of its dynamic random access memory (DRAM) and NAND flash memory products.

The fledgling autonomous vehicle market could present one such potentially fertile ground for Micron, and the chipmaker seems to have realized this. Let's take a look at how Micron plans to tap the opportunity in self-driving cars. 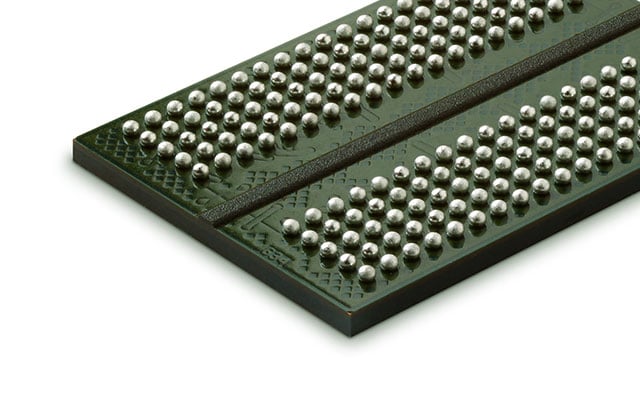 Self-driving cars have to quickly make massive calculations to drive themselves. In fact, it is estimated that each autonomous car will generate 1 GB of data per second, which will either be sent to the cloud for processing or be processed in the vehicle.

Transferring so much data to make real-time decisions will require high-performance memory, which is where Micron's expertise comes in. The chipmaker forecasts that cars will need system bandwidths of at least 300 GB per second to attain full automation. Micron is already pushing the envelope in this space through its low-power DDR (LPDDR) solutions, crafted especially for automotive use.

The company claims it is already shipping its fastest LPDDR4x memory to "multiple automotive customers," enabling system bandwidth speeds of up to 100 GB per second. Therefore, Micron has started taking the first steps to enable full automation in vehicles through its memory products. But it can take its product development a notch further with graphics-based memory chips, which could witness huge demand once autonomous cars go mainstream.

Micron is looking at the bigger picture

Though Micron is already shipping memory chips for the automotive industry, the chips won't be able to power high levels of automation in self-driving cars due to low system bandwidths. Therefore, Micron will now start working on high-bandwidth memory products based on the graphics memory (GDDR) platform.

More specifically, Micron plans to use its expertise in high-performance memory solutions that are commonly used in gaming, virtual reality, and other graphics processing applications. In fact, the company already supplies its memory solutions to graphics specialist NVIDIA to help the processor attain greater data read/write speeds.

As it stands, Micron is currently the only supplier of the high-bandwidth-equipped GDDR5X memory, and it is currently working on an even faster GDDR6 graphics memory that could hit the market this year. Therefore, it enjoys a lead over other memory manufacturers such as Samsung and SK Hynix, which are currently selling a different, more expensive version of graphics memory technology known as high-bandwidth memory (HBM2).

Micron says it is "actively engaged" with automotive players to further advance GDDR technology as this will be the key toward unlocking levels four and five of autonomous driving. Therefore, Micron's early move into making memory solutions for autonomous cars could open up a huge end-market opportunity for the company, insulating it from potential price challenges.

The good thing about Micron's push into self-driving cars is that it doesn't want to keep itself limited to just memory products. The company is also targeting ancillary applications such as device security.

Earlier this year, Micron teamed up with Microsoft to announce security solutions for Internet of Things devices based on its Authenta technology. The chipmaker is now extending that platform into the automotive arena, and it looks to provide hardware-level security to engine control units (ECUs) in cars.

This could open up another huge market for Micron as secure data transfer will be crucial to the safe operation of autonomous vehicles. Infoholic Research estimates the automotive cybersecurity market will grow at an impressive annual pace of over 13% until 2020.

The autonomous vehicle market could spawn a big opportunity for Micron to capitalize upon. It could substantially boost the company's revenue provided Micron can properly execute its product development moves and land lucrative contracts with automotive OEMs.