The chip company has unleashed a wave of new products with plenty of potential, but that potential is already reflected in the stock price.

Since the beginning of 2016, shares of Advanced Micro Devices (AMD -4.14%) have staged a rally that has left nearly every other stock in the dust. Investors have enjoyed a 360% return in less than two years, brought on by optimism about the company's new products and despite a long stretch of losses.

With AMD's market capitalization near a decade high, can the stock possibly keep moving higher? The good news for investors is that the company's new products are its most competitive in years, and that may be enough to drive more gains. The bad news: The stock price already bakes in so much optimism that there may be nowhere to go but down.

AMD's ongoing turnaround hinges on the company becoming competitive again in its core businesses. In the PC CPU market, AMD had been flailing since the 2011 launch of its Bulldozer microarchitecture, which was a clear-cut disaster. In the GPU market, rival NVIDIA had taken an overwhelming lead, stealing market share and dominating the lucrative high end. And in the server CPU market, AMD's market share disappeared as Intel enjoyed a near-monopoly.

AMD launched the first batch of its Ryzen PC CPU chips earlier this year, reasserting itself in a market that Intel had run away with. The strategy was to provide more cores for less money, and while the products come with trade-offs, Ryzen put Intel on the defensive. The manufacturing gap between the two companies has narrowed, with Ryzen built on a 14nm FinFET process and with Intel delaying its move to 10nm. AMD is a real option again in the PC market.

Vega, AMD's return to the high-end GPU market, has been more mixed. Vega provides similar performance as NVIDIA's high-end offerings, but the cards consume far more power. It's clear that AMD is struggling to catch up with the market leader. Still, Vega puts AMD back into the most profitable part of the graphics card market, and even modest market share gains can provide a boost to the bottom line.

With the server CPU market completely dominated by Intel, the timing of AMD's return couldn't be better. EPYC is AMD's new line of server CPUs, aimed at wresting some market share away from Chipzilla. Like Ryzen, EPYC offers more cores for less money, with a focus on providing a strong value proposition. The EPYC story will play out over the next couple of years, with the best-case scenario being double-digit market-share gains that make AMD a major player in the server chip market once again.

All three product lines will need to exceed expectations for AMD stock to keep roaring higher. The company will need to consistently produce double-digit revenue growth, and the bottom line will need to improve even faster. If AMD truly does return to its former glory, becoming a strong player in all its core markets for the first time in years, investors will likely be happy with the result.

Success is already priced in

If AMD falls short of expectations in any way, though, watch out below. The company unveiled its long-term outlook back in May, calling for double-digit annual revenue growth through 2020, with non-GAAP EPS expected to reach $0.75 in that year. AMD has posted a GAAP loss in each of the past five years, and it may end up posting a loss this year as well. The company is betting that its new products will push the bottom line back into the black. 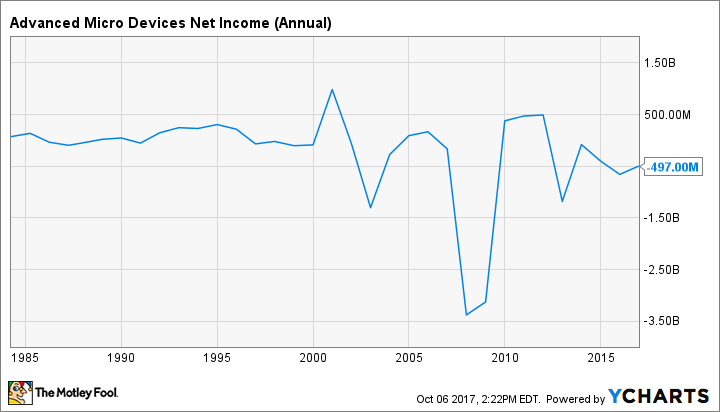 There are two problems with this outlook. First, non-GAAP EPS of $0.75 represents about $700 million of non-GAAP net income. On a GAAP basis, AMD hasn't produced net income above $500 million since the early 2000s. In other words, AMD's outlook assumes it will hit close to record levels of profitability by 2020.

The second problem is how the market is assigning odds to this best-case scenario. Trading around $13.25 per share, AMD stock is valued at nearly 18 times what the company hopes to earn three years from now. The market is essentially pricing in AMD hitting this guidance. Given AMD's history of overpromising and underdelivering, I wouldn't make that bet.

Nearly everything needs to go right for AMD stock to be an above-average investment from here on out. Possible? Sure. Likely? I doubt it.