One of the most concerning trends over the past year involves the trend in loan growth at banks, which seems to be decelerating. You can see this in the results of the large banks that have reported third-quarter earnings thus far, with Wells Fargo (NYSE:WFC) serving as an especially notable example.

Total loans at Wells Fargo fell 1% in the three months ended September 30, 2017 compared to the year-ago quarter. It was the only one of the nation's four megabanks to see its loan portfolio contract over the past 12 months.

Wells Fargo cited three culprits for the drop in its period-ending loans: Expected declines in automobile loans and legacy junior lien mortgages, as well as a drop in commercial loans, "reflecting paydowns and continued underwriting discipline," noted the bank.

But even though Wells Fargo fared the worst among its big-bank peers, the three other multitrillion-dollar banks also reported lackluster loan growth.

JPMorgan Chase's loan portfolio grew by 2.9%. Bank of America saw the second fastest climb, at 2.4%. Citigroup took third place, with an increase in total loans of 2.3% over the third quarter of last year. 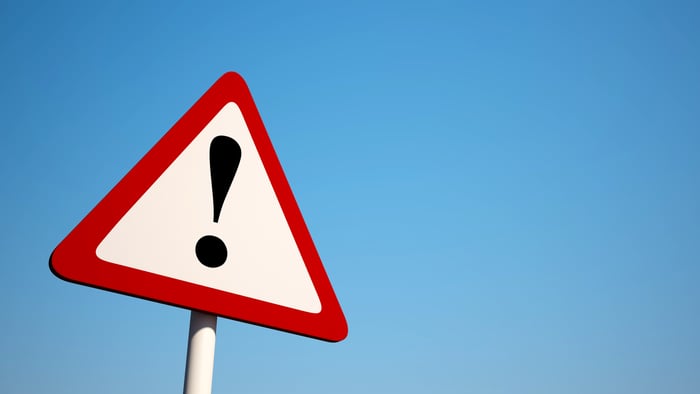 In the cases of JPMorgan Chase and Bank of America, in particular, these are much lower figures than the nation's two biggest banks publicized in their earnings announcements. Both focused instead on average core loan growth, which rose faster.

JPMorgan Chase said that core loans were up 7.5% on a year-over-year basis. Bank of America reported a 6% growth in core loans.

By "core loans," these banks are referring only to the loans they consider to be central to their business models. In Bank of America's case, this excludes the $73 billion worth of loans in its "all other" segment -- a non-operating unit that's responsible for administering toxic and noncore assets (think subprime mortgages) stemming back to the financial crisis. JPMorgan Chase considers a similar quantity of loans to be noncore, or $70 billion.

What's notable is that in all four of these instances -- and JPMorgan Chase, Bank of America, Wells Fargo, and Citigroup account for a meaningful share of the total loan market in the United States -- loan growth came in lower than the most recent gross domestic product (GDP) growth figures, which the U.S. Commerce Department estimated to be 3.1% in the second quarter.

This is significant because credit in the form of loans is one of the most important catalysts for economic growth. If loan growth is slowing, it isn't a huge stretch to think that the broader economy could soon follow.