Governments around the world are cracking down on the emissions from internal-combustion engines. Those pressures caught up with German auto-and-truck maker Daimler AG (OTC:DDAI.F) in the third quarter.

While an increase in sales drove a gain in revenue for Daimler in the third quarter, its operating profit fell 14% from a year ago on a jump in spending required to fix the emissions systems of older diesel vehicles in Europe.

It was Daimler's first year-over-year decrease in quarterly profit in over a year. 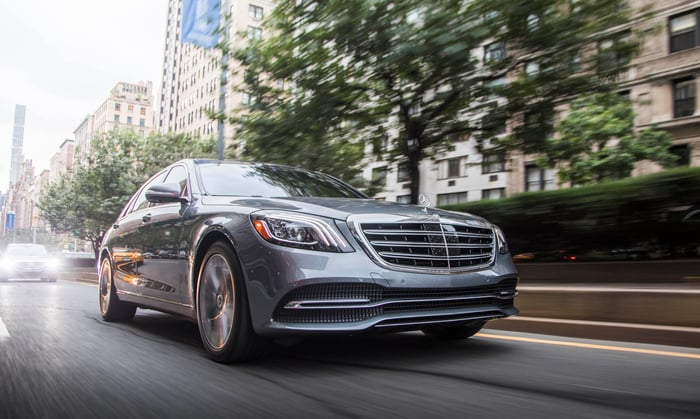 What happened with Daimler this quarter?

Daimler is exploring a corporate reorganization that would separate its vehicle divisions into two legally independent entities: one for the two Mercedes-Benz units, and a second that would house the Daimler Truck and Bus divisions. (Daimler's Financial Services unit is already a separate business, legally speaking.)

CEO Dieter Zetsche said that with sales strong, now is the right time to examine whether the company can position itself better for the future. "This project [the reorganization] aims to strengthen the future viability of the business units in order to better utilize the potential for growth and earnings in the various markets."

For us, safeguarding Daimler's future is based on three elements: protecting and increasing the Group's success, pushing forward with shaping the future for the employees, and ensuring the long-term commitment of investors. With these three factors, we will achieve -- from a position of strength-the best-possible structure for the future, enabling us to continue along our successful path. In this way, we will create value for our employees, customers and investors.

In its guidance for the full year, management reiterated the positive expectations it had previously set. For 2017, it continues to expect "significant" year-over-year increases in vehicles sold at all four vehicle divisions, in new financial-services business, in overall revenue, and in EBIT.