Please ensure Javascript is enabled for purposes of website accessibility
Log In Help Join The Motley Fool
Free Article Join Over 1 Million Premium Members And Get More In-Depth Stock Guidance and Research
By John Maxfield - Oct 21, 2017 at 9:47AM

The bank’s wealth management division has seen its assets under management climb to record heights.

When Bank of America (BAC 1.38%) reported its third-quarter earnings at the beginning of October, buried deep within the bank's earnings release was evidence of a major milestone: During the quarter, Bank of America's assets under management eclipsed $1 trillion.

Assets under management may not be a term you're familiar with, but it's a key part of many banks' business models. The term refers to assets that a bank or other type of financial services company oversees for other people as opposed to itself. The company administers the assets, in other words, but the clients own them. 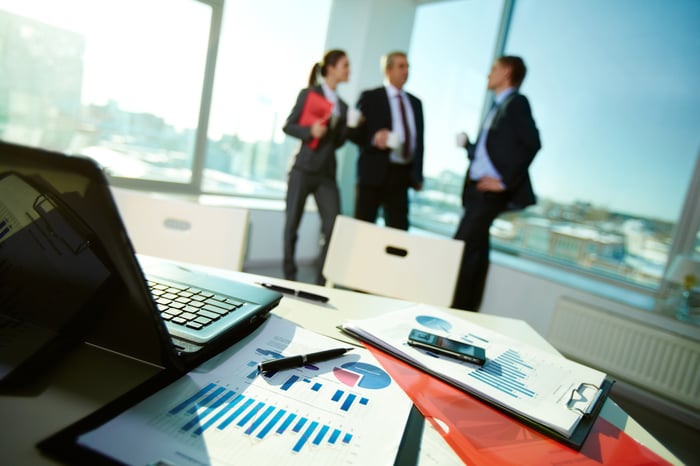 Wealth management is a major source of revenue for Bank of America. Image source: Getty Images.

This is an important part of Bank of America's business. The nation's second biggest bank by assets generated $4.6 billion worth of revenue from its wealth and investment management segment in the three months ended Sept. 30, 2017. After subtracting expenses, that translated into $769 million of net income, or about 15% of the bank's total bottom line.

Passing $1 trillion is a major accomplishment for Bank of America, but it isn't the only major bank to have done so. JPMorgan Chase (JPM 1.28%), the nation's biggest bank, has amassed nearly twice the amount. Its assets under management climbed to just under $2 trillion by the end of the third quarter.

That said, Bank of America is well ahead of the two other multi-billion-dollar banks: Wells Fargo (WFC 1.92%) and Citigroup (C 1.91%). Wells Fargo's assets under management came in at $496 billion last quarter, while Citigroup's were a comparatively minuscule $158 billion.

There are a number of advantages to amassing a large hoard of assets under management if you're a bank. In the first case, it tends to be stable income, not fluctuating much from one quarter to the next.

This contrasts against, say, trading revenues at banks, which regularly increase or decrease by double-digit percentages. In the most recent quarter, for instance, JPMorgan Chase saw its trading revenues fall 21% on a year-over-year basis, while Citigroup saw trading revenues in its fixed-income trading unit decline by 16%.

It's for this reason that Bank of America chairman and CEO Brian Moynihan refers to the bank's wealth management segment as an annuity-like business, as the revenue and earnings from it tend to stretch long into the future. 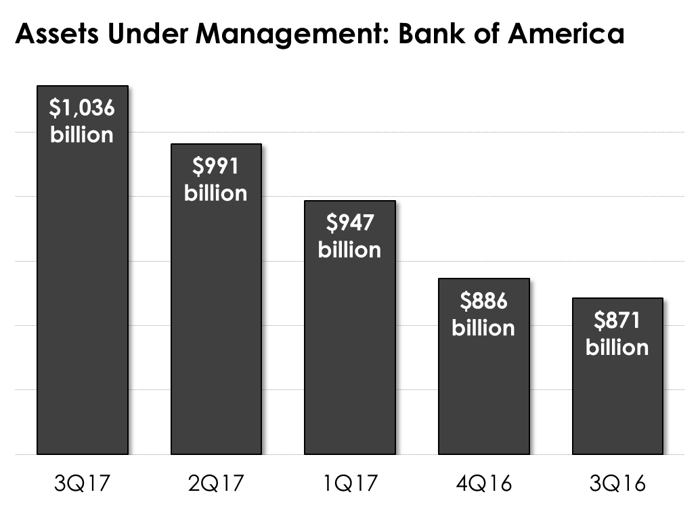 Additionally, assets under management don't expose banks to credit risk. This is the risk that an on-balance-sheet asset, typically a loan, will decline in value because the borrower stops making payments. This is a major issue for banks given that loan losses erode the bank's capital and, in recessions, can even cause a bank to have solvency issues, as was the case with countless banks during the financial crisis.

In short, while most investors and analysts regularly track asset growth on Bank of America's balance sheet, the assets that it controls off its balance sheet shouldn't be overlooked.