Jeremy Bowman, Daniel Miller, and Danny Vena
(TMFHobo)
Author Bio
Fool since 2011. I write about consumer goods, the big picture, and whatever else piques my interest. Follow me on Twitter to see my latest articles, and for commentary on hot topics in retail and the broad market. Follow @tmfbowman

Salesforce.com (NYSE:CRM) has been an undeniable winner since its 2004 IPO.

Shares of the cloud-management specialist have increased 2,200% since then with hardly a pullback. The stock has gained in every year except two. Today, Salesforce is worth more than $70 billion and is still putting up revenue growth in the range of 25%, a sign that plenty of growth and opportunity remain in the cloud software management sector it pioneered.

Given that record, it's not a surprise that investors would look for smaller stocks that could generate similar blockbuster returns. Below, three of our investors share why they believe XPO Logistics (NYSE:XPO), Veeva Systems (NYSE:VEEV), and Control4 Corporation (NASDAQ:CTRL) could be the next Salesforce-like breakout stock. 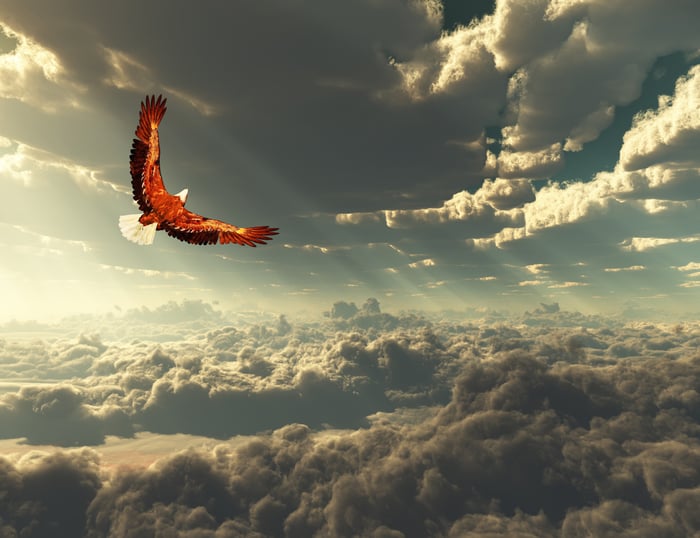 Revving up with e-commerce

Jeremy Bowman (XPO Logistics): Everybody knows that package delivery is becoming more important with the rise of e-commerce, but the biggest challenge for retailers and shipping companies trying to get orders to customers' homes is often the "last mile," or the last leg of the delivery.

That's why Amazon.com has been experimenting with handling its own deliveries, and why UPS and FedEx are experiencing a boom of their own. But often lost in the last-mile discussion is a small company that's making big moves -- XPO Logistics.

XPO has been on an aggressive acquisition streak, taking over trucking company Con-Way and logistics provider Norbert Dentressangle among others. As a result, both the company's revenue and stock price have surged as sales have gone from less than $1 billion in 2013 to nearly $15 billion over the last four quarters -- and the stock is up nearly 400% in that time.

CEO Brad Jacobs said he plans to spend another $8 billion on acquisitions to double the number of hubs in its last-mile delivery network, showing its growth spurt is far from over.  It counts some of the biggest retailers in the world as its customers, including IKEA and Zara.

The valuation is steep right now at a P/E of 75, but the company has plenty of room to ramp up its profit margins from less than 1% today to around 5% where FedEx and UPS are.

Like Salesforce, which capitalized on the cloud computing opportunity, XPO seems to be doing the same with e-commerce. If management executes effectively, the stock could deliver multi-bagging returns.

Danny Vena (Veeva Systems): Salesforce.com debuted in 2004, and early investors in the software-as-a-service (SaaS) provider have been treated to returns of over 2,000%! Investors looking to beat those returns should consider a company with a similar lineage -- Veeva Systems.

Ironically, Veeva's founder and CEO Peter Gassner was a senior executive at Salesforce, where he found that the company's product was ill-suited for use in the pharmaceutical industry. That planted the seed for what would become a cloud platform specifically geared toward the world's drugmakers.

The company's services are led by its Veeva Commercial Cloud, which is the legacy cloud-based CRM platform designed for sales and marketing that drug companies use to maintain contacts, track sales transactions, and confer with physicians for feedback. This system accounted for 68% of Veeva's $544 million in revenue for 2016.

The massive opportunity going forward, however, is the Veeva Vault. The platform addresses clinical trial management and serves as a gathering place for the data necessary to submit drugs for regulatory review. It also provides access to this data directly to the U.S. Food and Drug Administration, the agency tasked with drug approval.

The platform was so successful that the company created a version for other industries with high regulatory hurdles, expanding its offering to chemical, manufacturing, and consumer packaged goods companies. Revenue from Vault has grown at a compound rate of 123% over the past two years.

The combination of high switching costs and industry-specific solutions should provide Veeva with significant growth for years to come.

Poised for a smart-home boom

Daniel Miller (Control4 Corporation): If you were lucky and savvy enough to jump on board Salesforce.com's initial public offering, it's been a great ride since 2004 -- the stock is up more than 2,000%. The main driving force behind that success was that Salesforce.com practically introduced the world to the concept of cloud software, which has gone from a niche to how companies do business. Finding trends similar to the beginning of cloud software is no easy task, but Control4 may be on the verge of a similar trend with smart-home technology.

If you aren't aware of Control4, the company is a leading provider of personalized automation and control solutions that enable consumers to control just about any device within a home or business automatically. If smart homes are the next big trend, which isn't a far-fetched notion over the next two decades, Control4 stands poised to thrive. It has a substantial distribution network with over 5,400 independent dealers spanning 97 countries and is the professionally installed brand leader.

But to potentially match the massive share price gains investors enjoyed with Salesforce, Control4 will have to further penetrate its premium market. Control4 focuses on professional system installs that typically cost at least $1,000 and often up to $50,000, and generally connect 25 to 125 household devices. Currently Control4 estimates it's penetrated only 2% of the U.S. households generating more than $150,000 annual income, and that its international opportunity is even larger.

It's easy to see the company's potential over the next two decades, and what's even better for investors is that the company ended the second quarter with $65 million in cash and no debt. If smart homes are indeed the next big trend, Control4 looks to be a brilliant investment.