Shares of Twitter (TWTR -0.16%) are enjoying strong gains today after the microblogging service reported third-quarter results. Revenue in the third quarter fell 4% to $590 million, which led to a GAAP net loss of $21 million, or $0.03 per share. Twitter posted non-GAAP net income of $78 million, or $0.10 per share.

Additionally, there was good news and bad news on the monthly active user (MAU) front.

Let's start with the good: Twitter now has 330 million MAUs worldwide, the highest level it's ever been. That includes 261 million international MAUs and 69 million U.S. MAUs. The company added 4 million MAUs during the quarter on a sequential basis. 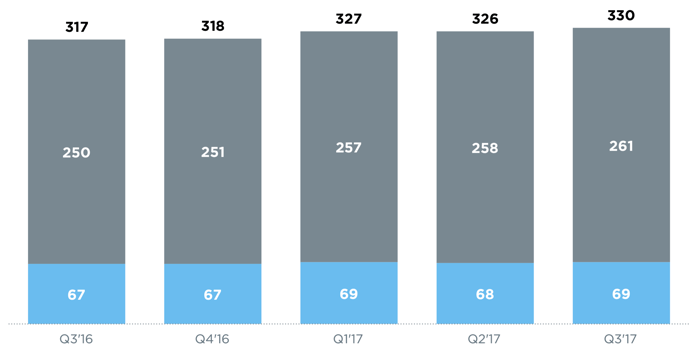 Dorsey is referring to the ongoing shift toward an algorithmic timeline (instead of the original reverse chronological timeline) that began last year, as well as tweaks intended to make the platform more approachable, like the recent testing of a 280-character limit for some accounts. Twitter has also vowed to crack down on abuse and harassment on the platform, but we've heard that plenty of times before, so investors will believe it when they see some tangible action. Twitter remains a preferred social media platform of Nazis and other hate groups.

And now, the bad: Twitter says it has been accidentally overstating MAU metrics since 2014, due to including "users of certain third-party applications" in its MAU tally that should not be considered MAUs. The issue revolves around Digits, a software development kit (SDK) that was part of Fabric, a platform that Twitter has since divested. Digits was launched in Q4 2014, and allowed third-party developers to authenticate via SMS, even though this didn't necessarily translate into activity on the platform.

Twitter has provided a reconciliation of MAUs for the past three quarters, and the adjustment is already reflected in the third-quarter metrics. (The MAU chart above represents the corrected figures.) Twitter says it cannot provide a reconciliation prior to Q4 2016 due to its data retention policies. The company has recently come under fire for those policies as they relate to the ongoing investigation into Russian interference in the 2016 U.S. election, which require Twitter itself to delete information once a user deletes tweets or deactivates their account.

The impact of the overstatement was fairly modest, amounting to 1 million to 2 million MAUs in the quarters that Twitter is able to reconcile, and the company says it believes that adjustments for quarters prior to Q4 2016 are smaller (i.e., less than 1 million MAUs).

Correcting an error in reporting is a good thing in terms of investor transparency. Now Twitter needs to start disclosing DAUs. Even the SEC wants the company to.