Please ensure Javascript is enabled for purposes of website accessibility
Log In Help Join The Motley Fool
Free Article Join Over 1 Million Premium Members And Get More In-Depth Stock Guidance and Research
By John Bromels - Oct 31, 2017 at 7:15AM

Shares of the specialty-truck maker hit an all-time high last week -- again. So why doesn't anybody seem to care?

Want excitement? Then let me tell you about Oshkosh Corporation (OSK -0.91%). The company -- based, as its name implies, in Oshkosh, Wis. -- manufactures all kinds of specialty trucks, including garbage trucks, telehandlers (basically forklifts on steroids), and aerial work platforms. The company also has several major contracts with the U.S. Department of Defense to provide specialty military vehicles.

Still not excited? How about if I tell you that the company's stock is up 70% in the past year, absolutely destroying the S&P 500's below-20% gains, and also trouncing other heavy-equipment manufacturers such as Caterpillar (CAT -2.57%), Deere (DE -0.39%), and PACCAR (PCAR -0.95%)? In fact, the stock has hit a new all-time record high in five separate months this year, and it will probably do so again in November.

But before you jump in with both feet, there are some things you should know. 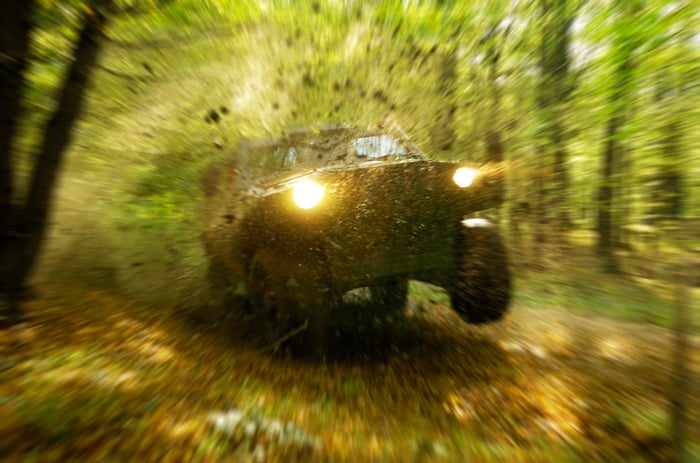 One of Oshkosh's major military products is the M-ATV. Image source: Getty Images.

The biggest jump in Oshkosh's shares came immediately after President Trump's surprise win in the November election, and it's not hard to see why. Oshkosh is pretty much the perfect stock for a Trump presidency. In 2016, it derived 21.5% of its revenue from its defense segment and 48% from its access-equipment segment, which consists largely of construction vehicles. Candidate Trump had promised to boost military spending and to implement a $1 trillion infrastructure spending package, both of which would have created positive business environments for Oshkosh. That's also one reason its stock has fared better than traditional truckmakers such as PACCAR.

At the time, though, there was some doubt about whether Congress would derail Candidate Trump's plans. And while the promised infrastructure package seems to be stuck in limbo, the proposed $90 billion military spending increase just a green light on Capitol Hill as part of the 2018 budget.

With the budget now passed, however, it looks as if the market's early moves to reward Oshkosh were justified. Of course, we don't know how much of that military spending will go to any specific defense contractor, but Oshkosh has been competitive in the past and has several existing long-term contracts with the military.

Knocking it out of the park

If Oshkosh's entire stock rally were based solely on exuberance over Trump administration priorities, it probably wouldn't be worth the price at which it's trading. However, over the past year, Oshkosh has been radically improving its fundamentals.

In the most recent third quarter, which ended June 30 (Oshkosh's fiscal year ends with September), the company improved by virtually every metric. Sales increased in all four of its business segments, and adjusted earnings per share were up an impressive 68% year over year. Margin and cash flow also improved. The company did so well, in fact, that it increased its adjusted EPS forecast to a midpoint of $3.85, up from Q2's projected midpoint of $3.35, which in turn was raised from Q1's projected midpoint of $3.20.

If Oshkosh reports another fantastic quarter in Q4 2017, the company may actually be living up to its hype.

While Oshkosh's fiscal 2017 is looking a lot better than its fiscal 2016, its revenue and earnings are still lagging behind its post-recession highs: 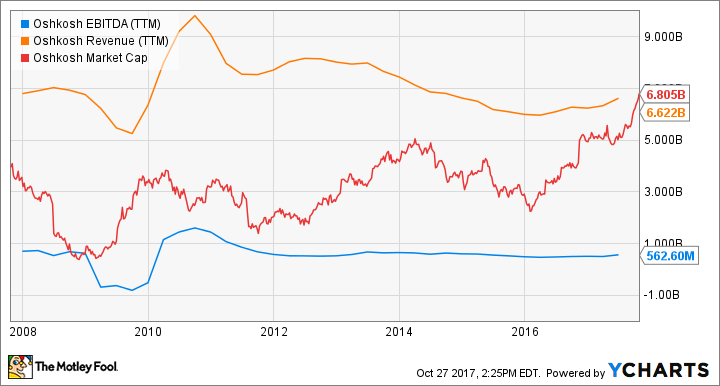 Now, there was a good reason Oshkosh's revenue and earnings were high in 2010 and 2011: The U.S. had a major troop presence in Iraq and Afghanistan. In Afghanistan, for example, there were 100,000 U.S. troops in 2011, compared with less than 10,000 in 2016. The American Recovery and Reinvestment Act had also funded numerous construction projects across the country. So, naturally, a company that specializes in light armored vehicles for troops and construction equipment is going to do well in those circumstances.

However, the stock is now much higher than it was in 2010-11, on lower overall revenue and earnings. Its trailing-12-month P/E ratio, which had been lower than PACCAR's but comparable to Deere's for much of the past 10 years, is now higher than theirs at 27.1, compared with Deere's 22.3 and PACCAR's 18.4. It's much, much lower than Caterpillar's.

Looking at forward P/E, though, Oshkosh's 21.9 -- while still on the high end of its peer group -- is far more in line with Caterpillar's 22, Deere's 20.5, and PACCAR's 17.3. While that seems to indicate that it may be fairly valued, investors should also consider that the massive stock price increase over the past year has knocked its dividend well below those of Caterpillar (2.3%), Deere (1.8%), and PACCAR (1.4%). Oshkosh currently yields a piddling 0.9%.

With big share price gains already in the rearview mirror, and enthusiasm about potential military and infrastructure spending already priced into the stock, plus a reasonable valuation based on forward P/E, there may not be much more upside left for Oshkosh. That said, the company is continuing to perform well, so buying in now wouldn't be the worst choice you could make. I wish the dividend yield were a bit higher -- it would go a long way toward improving the case for buying in at this record-high price.

One thing's for certain: Oshkosh doesn't look like the value it did a year ago. But there may still be gas left in the specialty-truck engine. If I owned Oshkosh today, I'd hold on and hope it keeps doing what it's doing.