From a headline perspective, there wasn't a lot wrong with third-quarter earnings from network security company Check Point Software Technologies Ltd. (NASDAQ:CHKP), but management's commentary and guidance may well have disappointed some corners of the market. Let's take a closer look at a mixed quarter. 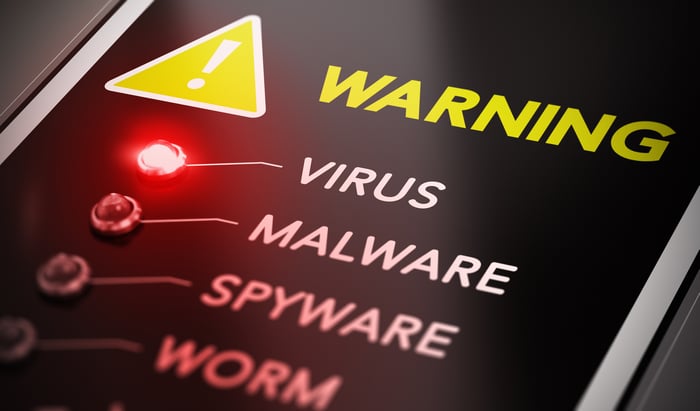 In a nutshell, revenue came in above the midpoint of guidance, and earnings were ahead.

As you can see below, the revenue increase marks a reduction in the growth rate from the previous two quarters' growth: 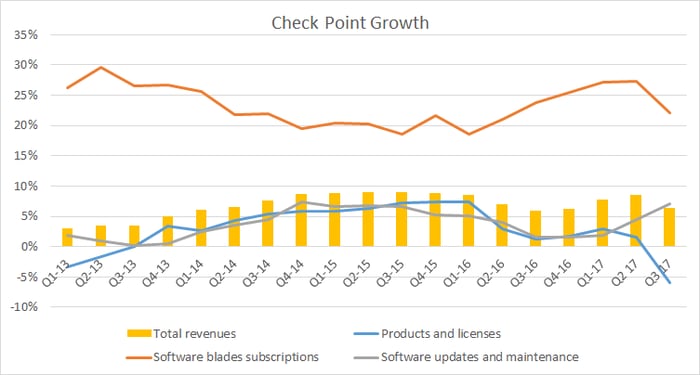 The reason why revenue growth slowed: As outlined on a call reviewing Check Point's second-quarter earnings, the Yom Kippur holiday fell on the last day of the Israeli company's third quarter. As such, it was difficult to predict the exact impact on the sales figures for the third quarter. However, if the weak-looking revenue in Q3 was merely due to a timing issue, presumably the Q4 numbers should look stronger. Unfortunately, this isn't the case.

Before looking closer at what's going on, here is the fourth-quarter guidance:

It's easy to see the midpoint of fourth-quarter guidance implies growth of just 4.2% -- a disappointing result. Moreover, the Q4 guidance is an implicit reduction of the company's previously stated full-year revenue guidance.

For example, going back to the fourth quarter of 2016, management forecast full-year revenue of $1.85 billion to 1.9 billion, but if you add the fourth-quarter guidance to the $1.349 billion in revenue for the first nine months, you get a range of $1.83 billion to $1.87 billion.

On a more positive note, the fourth-quarter EPS guidance suggests full-year non-GAAP EPS in the range of $5.21 to $5.31, and this is ahead of the original full-year guidance of $5.05 to $5.25. However, J.P. Morgan analyst Sterling Auty asked a question relating to the fourth-quarter EPS guidance and CFO Tal Payne replied "it's mainly in the taxes," so it's not really down to any kind of operational improvement.

In a nutshell, the improvement in revenue in the fourth quarter meant to come from a shift in revenues from Yom Kippur wasn't enough to avoid lower implied full-year guidance.

What happened in Check Point's quarter

The problem in the quarter appears to have been mainly from what CEO Gil Shwed called "execution challenges" in the U.S. He declared himself "cautious on our near-term execution," and referenced the expansion of the company's U.S. sales force and how it resulted in "many new people in key positions."

Shwed went on to argue that the U.S. sales force would take time to reach its full potential and that this consideration was baked into the fourth-quarter guidance, and said that "with all the new people in key positions in the U.S., our execution risk becomes higher."

Analysts quizzed Check Point's management as to whether the guidance reflected weakening end demand, but Shwed asserted it was down to execution.

Most investors don't like uncertainty, and Check Point's immediate target should be to remove it with regard to execution in the U.S. The market will be looking for Check Point to make its numbers in the fourth quarter, and then give guidance that can imply that the execution challenges in the U.S. are coming to an end.