Find out how the auction house saw a lot of action during a seasonally quiet period.

The summer months aren't typically a busy period for the art and collectibles auction industry, and investors in Sotheby's (BID) are used to seeing weak performance during the third quarter. However, the auction house has been working hard to get rid of some of its inventory holdings, and that opened the door to some surprising results from the company during the period.

Coming into Friday's third-quarter financial report, Sotheby's investors were prepared for extensive losses but wanted to see signs of sales growth. The company's results were far better than those low expectations, and a big jump in inventory sales showed that the auction house is making good on its promise to improve the quality of its balance sheet. Let's look more closely at Sotheby's and what its latest results show about its prospects. 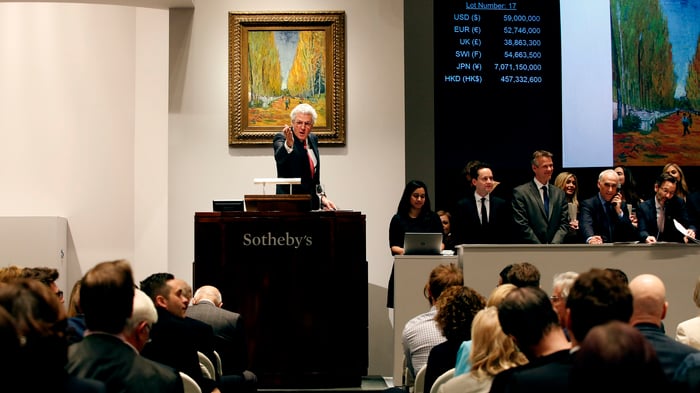 Sotheby's third-quarter numbers were surprisingly solid for this time of the year. Revenue soared 87% to $171.4 million, crushing the consensus forecast among investors for top-line growth of roughly 20%. Sotheby's lost $23.5 million, but that was less than half the amount of red ink from the year-ago quarter, and losses of $0.45 per share were much better than the $0.67 per share loss that those following the stock had expected.

For the third quarter in a row, inventory sales were a key contributor to Sotheby's revenue growth. Segment sales of $81.5 million were triple what the auction house brought in this time last year. The biggest favorable event for the segment's performance was the collection of $63 million in proceeds from the previous sale of what the company refers to as the Pink Diamond.

The other thing that lifted Sotheby's results was a vagary in the calendar. The auction house's autumn sales in Hong Kong have typically occurred in October, which falls into the company's fourth quarter. This year, however, the sales began on the last two days of September, and that pulled some revenue from the event forward into the third quarter. Sotheby's warned that this could have a potential negative impact on fourth-quarter numbers to a similar extent that they helped the third quarter. Overall, agency commissions and fees rose more than 40% to $72.7 million, and although direct agency costs doubled from year-ago levels, the higher revenue more than offset the costs involved in bringing in that business.

In addition to core performance, a couple of other factors helped Sotheby's. Private sale commissions were once again strong, rising 12% from year-earlier levels. Sotheby's also said that its portfolio of auction guarantees did better during the period, requiring less action from the auction house to shore up subpar auctions or take new assets into its inventory.

Can Sotheby's bring the hammer down on a great future?

CEO Tad Smith was happy with how Sotheby's did. "While the third quarter is seasonally quiet for us, things feel good for our business and the market overall," Smith said. The CEO indicated that Sotheby's attention will now turn to its annual sales in New York and Geneva, where impressive lineups will include works from artists Edgar Degas, Henri Matisse, Joan Miro, and Jackson Pollock, as well as a host of contemporary artists and some well-known jewels, including the Raj Pink and the Donnersmarck Diamonds.

Already, though, Sotheby's has seen some key drivers for its fourth-quarter performance come in. The Hong Kong sales brought in bids of more than $404 million, up 42% from last year's showing. More modest gains of about 10% came from Sotheby's London contemporary art sale, and auctions in Paris also had good performance.

Sotheby's shareholders seemed to take the quarter's unusual results in stride, and the stock was down less than 1% at midday on Friday following the announcement. Investors will need to adapt to the fact that fourth-quarter results will face the headwinds of having lost a couple of days of Hong Kong results, but the work that Sotheby's has done to cut its inventory by almost two-thirds in the past 12 months speaks to the successful implementation of its long-term strategies for growth.