There's a frequently cited PwC report that says 38% of U.S. jobs are at risk of being overtaken by artificially intelligent automation by 2030. Similarly, a Scientific American article warned earlier this year that 40% of the top 500 companies will vanish within a decade as they fall victim to artificial intelligence (AI).

Let's be honest, here -- those predictions are pretty easy to dismiss right now. The average person can take a look around and ask, "Where is all of this scary AI?" After all, the world's leading AI companies -- Alphabet's (NASDAQ:GOOG) (NASDAQ:GOOGL) Google, chipmaker NVIDIA Corporation (NASDAQ:NVDA) and Amazon.com (NASDAQ:AMZN) -- aren't showing TV ads about buying new AI bots just yet. So why worry?

But AI is already starting to take over in very subtle ways, and there's plenty of evidence that as AI becomes a bigger part of what these companies do, it'll eventually become a bigger part of how our world functions. 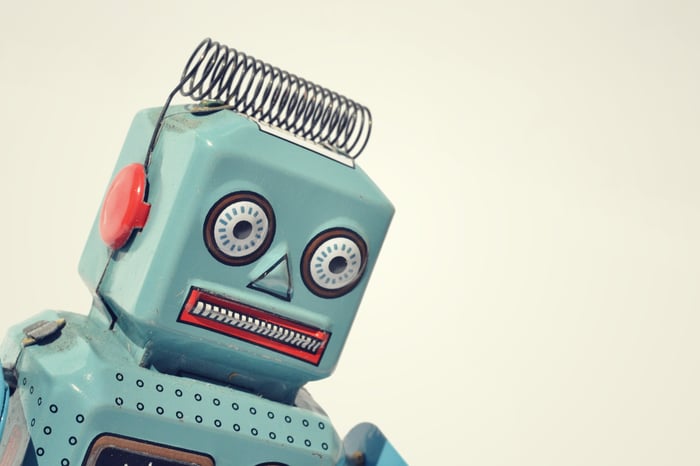 I don't want to creep you out, but if you own a smartphone then you've likely talked to artificial intelligence. More specifically, if you've asked Siri a question, talked to Google Assistant, searched for a photo in Google Photos, or uploaded a photo to Facebook and let it automatically tag your friends, then you've used a form of AI.

Google is probably one of the most well-known AI companies right now because its AI company, DeepMind, has bested the world's top players in the ancient game of Go. But Google is also using AI in less public ways as well. The company has added machine learning algorithms to its core apps -- like Search and Photos -- and has made its machine learning tool, TensorFlow, available for free so developers can create their own AI-driven apps. Of course Amazon has been using AI in plain sight as well, with its popular Echo devices. The company's lineup for smart speakers and in-home devices have the company's artificially intelligent assistant, Alexa, in them, but Amazon is also using machine learning algorithms to serve up the most relevant content when you're searching for items on its e-commerce platform.

Additionally, the company's Amazon Web Services (AWS) -- which is Amazon's biggest business by operating income -- has AI tools for developers that help them create AI apps, just like Google.

Those are examples of some AI software and tools that are working in the background of commonly used tech already, but hardware that's designed specifically for AI use is pervasive as well.

Google said just last year that it's creating its own Tensor Processing Unit (TPU) specifically for running AI and NVIDIA has been tweaking its own graphics processing units (GPUs), and creating new processors, to be used for some of the most advanced AI servers run by Microsoft, Amazon, and others.

NVIDIA's GPUs are an integral part in the company's own AI-powered autonomous driving systems, the latest of which is Drive PX Pegasus, as well as in the company's powerful DGX-1 server, which is used for deep learning research and analytics.

NVIDIA's lead in the AI hardware space has helped the company carve out its own artificial intelligence niche and could give the company a total addressable market in AI of more than $30 billion over the next eight years.

Ok, so there are plenty of examples of AI all around us, but how exactly will this tech go from answering basic questions to stealing away our jobs? The answer is that AI is becoming faster and smarter at an exponential rate. 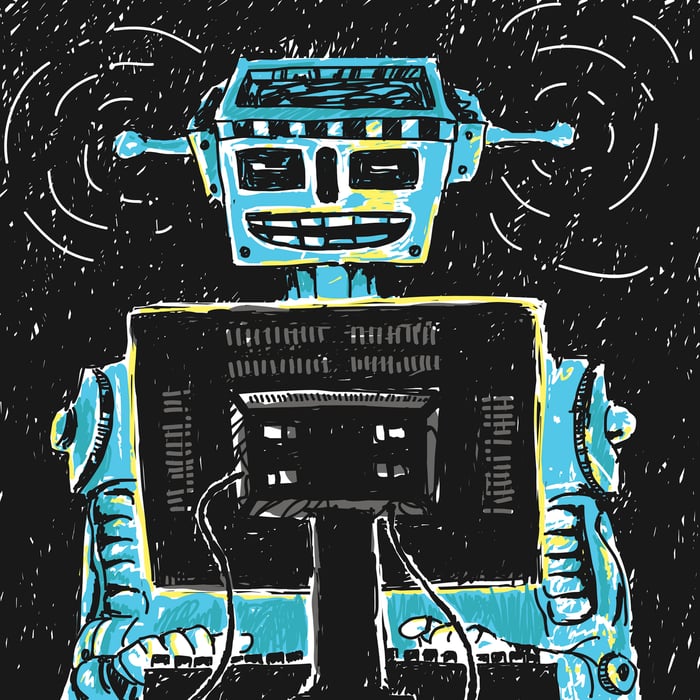 Of course, this rate of acceleration doesn't just apply to autonomous vehicle technology. A recent Mother Jones article says that AI will have one-tenth of human brain capabilities just before 2035 -- but that artificial intelligence will then surpass human intelligence by 2060.

"[S]urgeons, novelists, construction workers, police officers, and so forth. These jobs could all be fully automated during the 2040s. By 2060, AI will be capable of performing any task currently done by humans," the author writes.

If this timetable proves true, then it means that other predictions, like the ones below from research firm Gartner, become more likely as well.

These are all just predictions, of course, and no one has a crystal ball that can predict when all these transitions will occur. But what is clear is that tech companies are already investing heavily in AI, the tech is commonly used by average technology users, and that AI uses are accelerating quickly.

Investors would be mistaken to think that we're too far out from this technology trend to start buying into it now. Google, NVIDIA, Amazon, and plenty of others are already betting on AI and the more time that passes the more artificial intelligence is likely to start upending industries.

Kai-Fu Lee, the founder of venture capital firm Sinovation Ventures and a tech leader in China said recently that AI, "[W]ill be larger than all of human tech revolutions added together, including electricity, industrial revolution, internet, mobile internet -- because AI is pervasive."

Essentially, investors should ignore what these companies are doing with artificial intelligence at their -- and their portfolio's -- own risk.