Please ensure Javascript is enabled for purposes of website accessibility
Log In Help Join The Motley Fool
Free Article Join Over 1 Million Premium Members And Get More In-Depth Stock Guidance and Research
By Matthew Cochrane - Nov 14, 2017 at 8:31AM

With a growing user base, a new marketing campaign, and two million merchants now accepting it as a method of payment, Venmo seems poised for success.

Even among the heady growth numbers PayPal Holdings Inc (PYPL 0.41%) reported in its third-quarter earnings release, the growth of its social payment app Venmo once again easily stood out. The payment app processed $9.4 billion of payment volume in the third quarter, a 93% increase year over year. While PayPal does not reveal the number of Venmo users, management did say that the app added the highest number of new net active accounts in its history, demonstrating its growing popularity.

In the week before the company reported earnings, PayPal made another big announcement regarding Venmo: Venmo would now be accepted as a method of payment at the two million retailers that accepted PayPal.

Investors have been patiently waiting for this move for a long time. Up until this point, Venmo has primarily acted as a P2P payment app, meaning account holders have used it to send money to friends or family. While this function has helped Venmo grow virally, it has not made PayPal any money. The P2P payment feature is offered free to users as long as a bank or funds sitting in the account act as the source of the payment. When a credit card is used, Venmo charges a small fee, but that mostly goes to the credit card company. 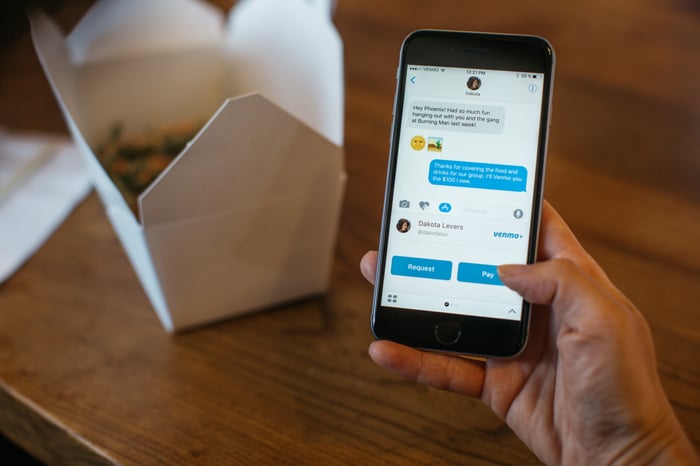 Now that Venmo can be used to make transactions with merchants, shareholders will finally start to see some top and bottom line contributions from it. To capitalize on its growing popularity and market its new uses, the company also launched a new ad campaign called "Blank Me".

The ad campaign, announced in a company blog post, will run through digital channels like social media and dating apps and will feature advertising at bars, restaurants, and night clubs in big cities and college towns across the country. The suggestive and cheeky spots try to convey Venmo as being synonymous with digital P2P payments, to the extent that consumers can simply use the brand name as a verb. When Adweek discussed the campaign, it described the idea of Venmo being used as a verb as "a bit of a stretch," but I'm not so sure: while the idea might sound outlandish to some, for millennials the concept might not be so far-fetched. 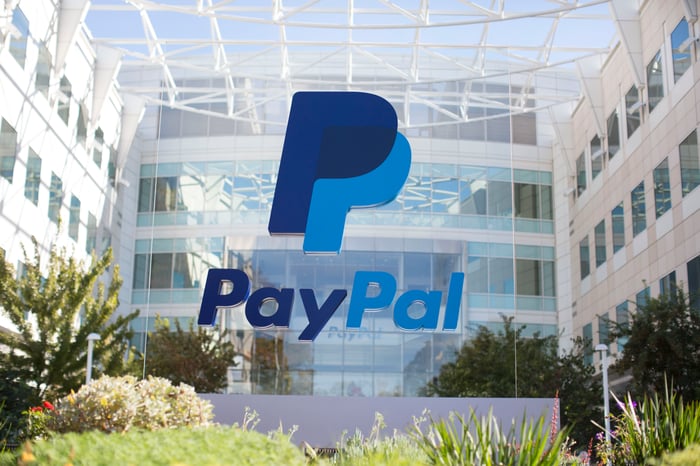 Venmo is immensely popular with millennials. In early 2014, almost four years ago, Business Insider noted how Venmo was already being used as a verb among the 18 to 24-year-old age group. Students praise the service in opinion pieces. Feature articles in college newspapers rave how the service has transformed campus commerce.

Given the viral growth the app has achieved without any assistance from PayPal's advertising department, a successful marketing push might act as rocket fuel poured on top of the bonfire of Venmo's viral growth. Of course, given its organic explosive growth and budding network effect, it might be hard to tell where the growth from marketing begins and the word of mouth ends.

During the conference call, PayPal's management didn't go into too much detail about what they expected Venmo to immediately contribute to the company's top and bottom lines, but analysts did get CFO John Rainey to say:

"We do have some modest assumptions about monetizing Venmo going into next year. We're encouraged by the launch of Pay with Venmo with 2 million merchants right now. We'll continue to expand that. But as we said before, this has been an area of investment for us. We're looking forward to being able to monetize this. But we've got pretty measured expectations around this, so we don't want to get too far out in front of ourselves. This is a pretty precious experience, so we want to make sure that we get it right. And so in the guidance that we gave, approximately 20% revenue growth and 20% earnings growth, that does include some assumptions about Venmo. But this is a leg of growth for us, profitable growth into the future, and we've got a multiyear outlook going on what this will be."

While this doesn't sound like PayPal shareholders should expect too much too soon, taking Venmo's contributions from a net negative to a net positive is definitely a move in the right direction. Furthermore, there is reason to believe Pay with Venmo will expand PayPal's overall transaction margin. While Venmo users are encouraged to link credit cards to their accounts, management believes a good deal of Venmo transactions will be funded from cash in users' accounts or debit cards. These funding sources cost much less for PayPal to process than credit card-funded purchases, but the revenue PayPal takes in is the same regardless.

Though PayPal's share price has already soared more than 87% since the beginning of the calendar year, several catalysts remain in place that could send the stock higher. But few of these prospective developments hold the same potential as Venmo, which seems poised to start meaningfully affecting its parent company's bottom line. While this impact might be modest at first, with a growing network effect, vast new merchant acceptance, and a new marketing push, I doubt investors will have to be patient for much longer.