Conscious capitalism starts with the basic premise that a business can do good for its workers, the environment, and its shareholders, all at the same time.

John Mackey, founder of Whole Foods Market, wrote a book on the subject named Conscious Capitalism: Liberating the Heroic Spirit of Business. In it, he describes businesses that have become extraordinary successes while making a world a better place.

He names several companies as examples, including Costco (NASDAQ:COST), Alphabet (NASDAQ:GOOG)(NASDAQ:GOOGL), and Starbucks (NASDAQ:SBUX), all of which have produced market-beating returns while employing conscious-capitalist principles.

Let's look at just three of the many companies Mackey profiles and explore in greater detail what makes them conscious capitalists.

Products by the pallet

The key to Costco's success is its ability to move inventory quickly, selling only what buyers want in quantities that allow it to offer the lowest prices on a per-ounce or per-unit basis. Low prices are, after all, what keeps customers coming back.

But while Costco may be a penny-pincher when it comes to inventory, it doesn't cut corners when it comes to labor expense, or charitable giving in the communities in which it operates. In a business where efficiency is everything, long-term experienced employees are an asset to the franchise.

The company starts employees at $13 per hour, far more than most retail chains, but its cashiers can advance and earn bonus compensation that brings their total compensation up to $56,000 per year. The vast majority of its employees enjoy healthcare benefits, too. That includes part-time employees, who start receiving benefits after just three months at the company.

Costco writes about its unique approach to labor expense in its annual reports. Here's an example:

With respect to expenses relating to the compensation of our employees, our philosophy is not to seek to minimize their wages and benefits. Rather, we believe that achieving our longer-term objectives of reducing employee turnover and enhancing employee satisfaction requires maintaining compensation levels that are better than the industry average for much of our workforce. This may cause us, for example, to absorb costs that other employers might seek to pass through to their workforces.

Not surprisingly, Costco routinely ranks as one of the best retailers to work for, and it has shockingly low employee turnover. In any given year, the company loses only about 6% of its staff who have been at the retailer for more than a year. Customers can feel good knowing that its low prices that aren't coming at the cost of its employees' biweekly paycheck.

Paying an above-market wage isn't just good for its employees, but it's good for business, too. Hiring is an expensive process, one most companies would prefer to avoid. And having experienced employees simply helps Costco be more productive. Its stores sold more than $1,175 of product per square foot last year, not including membership fees. That's a lot of 4-pound jelly bean tins.

Google (now Alphabet) started with the basic premise that information should be readily available and open. Its founders believed that if they hired the best and brightest and took calculated bets with a long view in mind, it could make the world a better place while generating above-average returns for investors.

Google found motivation in a simple goal. As Mackey wrote in his book, "Google's original purpose was to organize the world's information and make it easily accessible and useful." It's as simple as it is admirable, and customers love it. Google takes the No. 1 spot for internet traffic, as it is the portal through which most people find what they're looking for online.

Mackey writes that Google's success is the by-product of many conscious-capitalist principles:

The founders created a great place to work; team members are smart, empowered, innovative, very well looked after, and highly customer focused. They were clear about the kinds of investors they wanted to attract, clearly laying out their business philosophy in their prospectus. Google had a wonderful philanthropic strategy for its community stakeholders, and it implemented the strategy before its initial public offering, setting aside 1% of the company's stock for the Google Foundation, and pledging to contribute 1% of profits to the foundation annually.

Google.org has funded projects that are both good for the world and, frankly, good for Google. It supports an initiative called BRAID (Building, Recruiting, And Inclusion for Diversity) to increase the percentage of women and students of color who major in computer science. It also supports Code for America, which helps connect America's job seekers with training and job search support to fight poverty. These projects help make the world a better place by training people for high-paying jobs, some of whom will ultimately decide to take a job at Google.

It's not all about job training, though. Google.org has invested heavily in worldwide education efforts to lift people in frontier markets out of poverty. These are the kind of initiatives that everyone -- employees, communities, and shareholders -- benefit from being part of.

One coffee at a time

Starbucks knows that coffee is just a commodity. There has to be something special to keep people engaged and coming back for another $4 cup. Customers look to Starbucks as their "third place," a place of comfort outside home and work.

As Mackey wrote in his book, Starbucks creates a community by encouraging employee loyalty with autonomy, high pay, and lucrative employee benefits:

When it provides health benefits to its part-time workers (spending more on healthcare than it does on coffee), the team members clearly win. Customers win from having more engaged and caring team members, such as baristas who remember their names and the details of their orders.

Starbucks is successful because it captured a large portion of the market, and expanded the coffeehouse industry as a whole. It also led the charge on important environmental concerns that are important to its customers. In 1999, it started a "Grounds for Your Garden" project to provide free used coffee grounds to anyone who wanted them for composting. In 2006, it started using recycled paper in its cups to reduce waste. Last year, the company unveiled a plan to donate 100% of all unsold food from its stores to local food banks and pantries.

These initiatives are good for both shareholders and the business alike, as customers feel good about buying their favorite drinks from the Seattle-based coffee chain. Note that the company spent less than 2% of its revenue on marketing last year, a pittance compared to many food and drink businesses.

Even negative attention has been good for the brand. Remember the firestorm that erupted when Starbucks changed its classic Christmastime cup? Some saw it as a "war on Christmas." But the outrage stands as a testament to just how important Starbucks is to its customers. How many companies play such an intimate role in daily lives of so many people that changing the disposable, seasonal packaging becomes a headline event? Starbucks may be the only one. 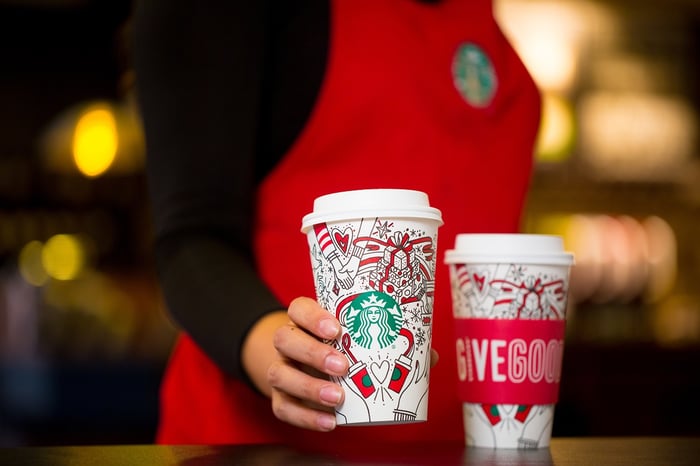 There is merit to building a business that succeeds by making the world a little bit better than before. Making the world a better place doesn't have to be grandiose; it can be something as simple as caring about your customers.

In his book, Mackey writes about how Amazon.com has been successful because it cares more about its customers than perhaps any other retailer, writing that Amazon's founder, Jeff Bezos, goes so far to put an empty chair in every meeting to remind participants that the customer is important, even if the customers aren't in attendance.

To be sure, some companies have been successful even though their business models arguably make the world worse than the day before. Tobacco companies sell a dangerous and addictive product that kill millions of people each year. Nonetheless, tobacco stocks top the list of the world's best-performing stocks over almost any time period.

Likewise, not all of the companies Mackey specifically mentions have gone on to duplicate their historical success. Retailers Nordstrom and The Container Store, which are championed in the book, have arguably been disrupted in a big way by another conscious capitalist, Amazon.

But what's certain is that doing good can be good for all stakeholders: employees, suppliers, customers, and of course, investors. The business practices outlined in Conscious Capitalism aren't a prerequisite for generating above-average returns, but the businesses that employ them are a good cohort for investors who want to find the next market-beating stock.