Please ensure Javascript is enabled for purposes of website accessibility
Log In Help Join The Motley Fool
Free Article Join Over 1 Million Premium Members And Get More In-Depth Stock Guidance and Research
By Steve Symington - Dec 6, 2017 at 9:30AM

The e-gaming specialist plunged last month with its first quarterly report as a public company. Here's what investors need to know.

Shares of Sea Limited (SE) dropped 23.1% in November, according to data from S&P Global Market Intelligence, after the Singapore-based e-gaming company announced quarterly results for the first time since going public.

More specifically, after drifting lower in the days leading up to its inaugural report, Sea Limited shares plunged another 10% on Nov. 28, 2017, alone -- the first trading day after the formal release. In it, Sea confirmed that its quarterly revenue had climbed 4% year over year to $94 million, largely in line with consensus estimates. And if you include deferred revenue and e-commerce commission income, the top line increased a much more impressive 73% year over year to $151.7 million.

On the bottom line, however, that translated to a whopping adjusted net loss of $127.1 million, or $0.75 per share. 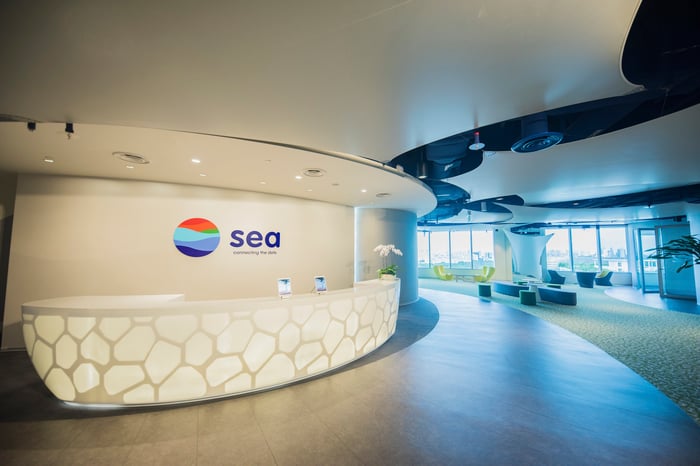 Nonetheless, chairman and CEO Forrest Li said the company exceeded its internal expectations, noting that it continues to invest for the future and remains "confident about the long-term potential of our business."

Otherwise, Sea's growth in revenue (plus deferred revenue and commissions) was broad-based, including a 62% increase from its core digital entertainment segment driven by the Garena platform, 111% growth from its e-commerce operations through Shopee, and a 172% increase in gross transaction value through its AirPay digital financial services business.

Looking ahead to the full fiscal year, Sea told investors to expect revenue of $540 million to $550 million, good for strong growth of 53% to 56%.

Of course, that's nothing to scoff at. And it's not unusual to see young tech companies incurring heavy losses as they invest to drive top-line growth and take market share. Further complicating matters is how little time has passed since Sea's IPO in October, which means the stock is still subject to violent post-IPO swings on even the most immaterial news. In fact, that's part of the reason I personally prefer to watch recently IPO'd stocks from the sidelines for at least a quarter before considering whether to step in.

In the end, though. I think investors would do well not to overthink last month's drop. Sea Limited's growth story is still in its early stages, and there's plenty of time for it to prove its worth to the market.