Please ensure Javascript is enabled for purposes of website accessibility
Log In Help Join The Motley Fool
Free Article Join Over 1 Million Premium Members And Get More In-Depth Stock Guidance and Research
By Scott Levine – Updated Dec 11, 2017 at 8:16AM

Bad weather may devastate some businesses, but for others it can be a boon.

Extending the 27% climb they experienced through the first 10 months of the year, shares of Raven Industries (RAVN) rose 14% in November, according to S&P Global Market Intelligence in response to the company's third-quarter earnings report for fiscal 2018.

In part because of extensive hurricane relief efforts, Raven reported strong top-line growth -- about 40% year over year -- during the third quarter. According to the company, revenue from hurricane recovery film typically accounts for less than $2 million on an annual basis; however, in the recently completed third quarter, sales of recovery film totaled $8.4 million. This translated to increased profitability as well. Increasing 141% year over year, operating income was $17.8 million for Q3 while net income increased 109% to $12 million during the same period. 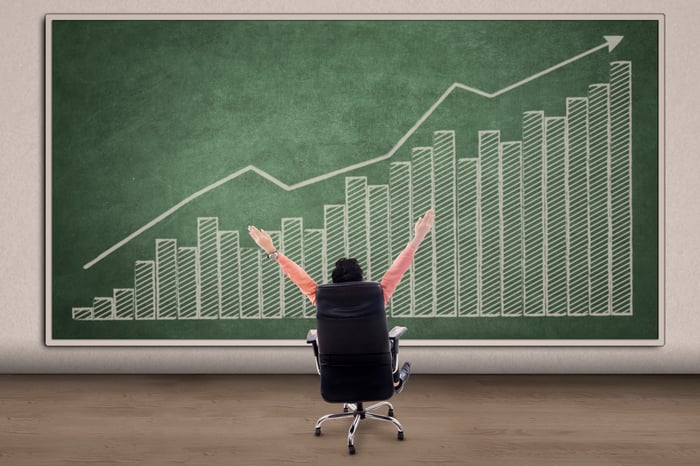 Besides the impressive financial performance, investors also took delight in the continued execution of Raven's stock-buyback initiative. During the third quarter, Raven repurchased approximately 350,000 shares for $10 million. Over the past three years, Raven has reduced its share count by 6%, and it has plans to reduce it even further in the future. Moving forward, management plans to spend another $53 million on its share-buyback program.

Looking to streamline the company's operations, management announced the launch of Project Atlas, a companywide initiative to increase efficiencies. According to management, Project Atlas will "enable faster integration of future acquisitions, automate a significant portion of internal controls, and enhance the enterprise's execution of its long-term growth strategy." Although the initiative added $0.3 million to the company's corporate expenses in the recently completed quarter, management expects Project Atlas to account for $1 million in corporate expenses for each quarter in fiscal 2019.

Although Raven forecasts approximately $8 million to $9 million in sales of hurricane recovery films in the fourth quarter, it's important to remember that this isn't likely to be a consistent driver of revenue growth. Consequently, investors should monitor the company's other segments -- applied technology and Aerostar -- to obtain a comprehensive view of the company's overall financial performance. In addition, investors should look for the company to improve its operating margin, confirming the success of Project Atlas.