Ford is working with the Chinese e-commerce giant to find new ways to sell cars to connected customers.

Ford Motor Company (F 1.71%) is gearing up to test online alternatives to the traditional car-buying process via one of the world's largest e-commerce platforms.

Ford and Chinese e-commerce giant Alibaba Group (BABA 2.04%) said last week that they have signed a deal to explore collaboration in several high-tech areas, including ways in which technology could be used to change the auto-sales process.

If that sounds to you like "Ford is thinking about selling cars online," you're not wrong. The deal could go considerably beyond that -- but that's clearly an idea that's on the minds of executives at both Ford and Alibaba. Here's what we know. 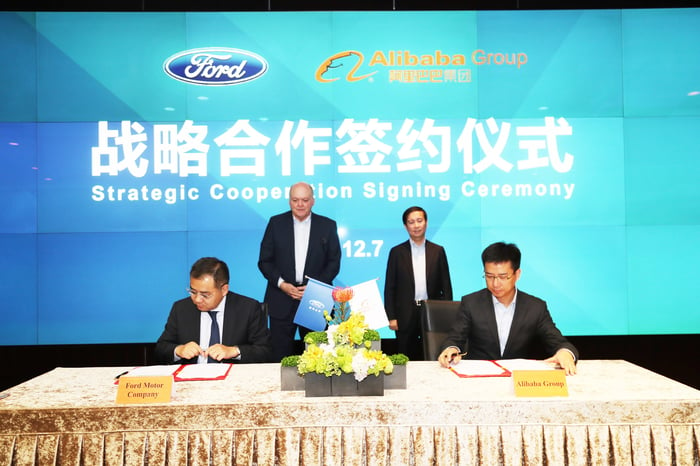 Officially, what Ford and Alibaba signed last week is a "letter of intent" to explore several areas of potential collaboration, including connectivity, cloud computing, artificial intelligence, mobility services, and digital marketing, the two companies said in a joint statement.

It's a three-year deal that "aims to explore new ways to redefine how consumers purchase and own vehicles, as well as how to leverage digital channels to identify new retail opportunities," the statement said.

Under the deal, Ford will explore collaborations with four of Alibaba's business units:

The collaboration will begin by exploring digital solutions to enhance the vehicle-buying experience, the partners said.

What does it mean for Ford?

Among other things, it looks like Ford wants to test various ways of selling cars online -- or at least, ways in which it might support parts of the car-sales process. And it's possible that some or all of what works for Ford in China could find its way to the United States.

Reuters reported that Ford is likely to try selling vehicles online via Tmall, with traditional franchised brick-and-mortar Ford dealers responsible for the final delivery of the vehicles to customers.

Ford may also try selling vehicles via Tmall's new automotive "vending machines." These are tall glass-walled parking garages that resemble giant vending machines, similar to those used by U.S. used-car dealer Carvana Co. (CVNA -3.14%). Carvana sells used vehicles via an online process; buyers who live near one of the company's "vending machine" locations have the option of receiving their vehicle at that location. 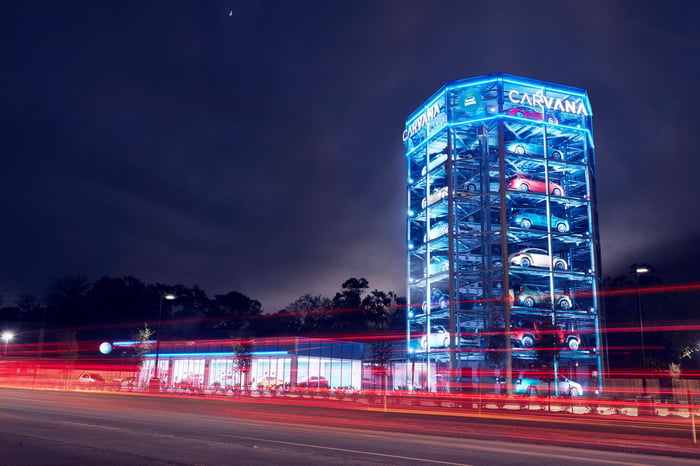 A Carvana "vending machine" location in Houston, Texas. Buyers can opt to travel to the location and deposit a giant "coin" to receive their vehicle. Image source: Carvana Co.

The larger subtext is that new Ford CEO Jim Hackett and his new China chief, Jason Luo, are looking for ways to turn around the company's ongoing sales slide in China and return to sustainable long-term growth in the world's largest car market. Online sales might or might not turn out to be part of the solution, but it's no surprise that tech-savvy Hackett plans to test the idea.

None of this means that Ford is going to eliminate its traditional franchised-dealer network, either in the U.S. or in China. But it's not hard to see a not-too-distant future in which a Ford customer can complete most or all of the car-shopping process online, with the franchised dealer involved only in the final delivery, warranty service, and possibly a test drive.

It's also not hard to see how that could be a win-win-win for Ford, the dealer, and customers. Customers get a simplified, low-pressure sales process; dealers get a profitable sale without a lot of up-front work, helping to boost thin margins; and Ford benefits from both.

Will it happen? Don't be surprised if something like it does, once Ford and Alibaba complete their work.