Two years ago, I predicted the development of 21st Century whiz-bang weaponry -- laser cannons and electromagnetic railguns -- would change the face of the U.S. Navy, making it better, more powerful, and cheaper to operate. Two years later, the Congressional Research Service agrees.

Across the defense industry, companies ranging up and down the alphabet -- from BAE Systems (BAES.Y -1.54%) to Kratos Defense (KTOS -3.69%), Northrop Grumman (NOC 0.16%) to Raytheon (RTN), and mostly of the other publicly traded companies in this space -- are hard at work making these new technologies a reality. In a report to Congress issued November 30, 2017, the U.S. Congressional Research Service (CRS -- an arm of the Library of Congress, sometimes referred to as "Congress' think tank") published a 46-report examining the state of development of three key weapons systems: Solid-state laser weapons, electromagnetic railguns (EM railguns, or simply "railguns"), and the Mach-speed hypervelocity projectiles used by the latter.

Wouldn't you like to know what Congress's own private think tank has to say about these weapons? Today you can. Here are nine fascinating facts from the CRS report: 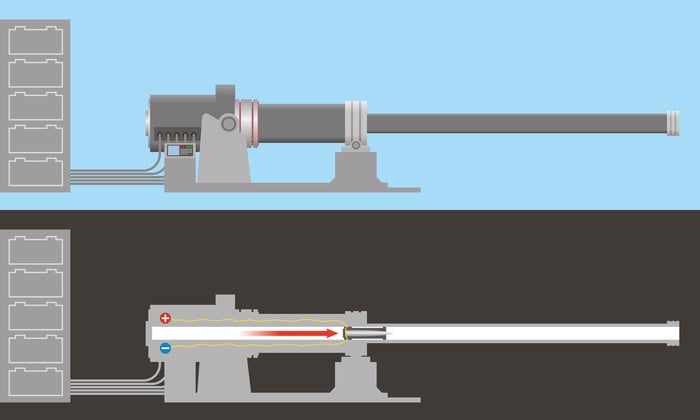 The Congressional Research Service is not an agency often characterized by breathless, irrational exuberance, yet it seems on the verge of hyperventilation over these technologies. Explains CRS: "any one of these new weapon technologies ... might be regarded as a game changer." If two or even three of them can be successfully developed, though, CRS says that "might be considered ... a revolution" in warfare.

Why is that? ASCMs and ASBMs cost perhaps a couple million dollars apiece to produce, but their primary target in a naval war against the United States would be our $8 billion Nimitz-class and $14 billion Ford-class nuclear-powered aircraft carriers. That mismatch in price tags makes it likely that in any naval engagement, American carriers will face attacks by swarms of hundreds of ASCMs and ASBMs at a time. Even used in great numbers, such weapons can "kill" a carrier at a fraction of the carrier's cost. Furthermore, American surface-to-air missiles, used to defend against ASCM and ASBM attack, cost nearly as much as (and sometimes more than) the missiles they're used to defend against.

Thus, whether or not an aircraft carrier survives a missile battle -- either way, America loses the economic battle.

Enter the laser cannon and the electromagnetic railgun. The U.S. Navy has conducted extensive testing of new laser weaponry aboard its warships. These tests confirm that it costs "about one dollar to shoot" down a missile with an onboard laser cannon -- versus $1 million or more for China to build that missile.

Electromagnetic railguns offer a similar value proposition, if not quite as extreme. CRS estimates that each hypervelocity projectile fired from an EM railgun will cost about $25,000 to produce. Again, versus a $1 million missile, that's a compelling bargain -- an economic war the Navy would love to be able to fight.

4. The (other) solution: Infinite bullets

One thing the Navy most definitely does not want to fight is a war against a country like China, with a stockpile of thousands of missiles, fought from the platform of a guided missile destroyer carrying no more than 90 surface-to-air missiles onboard. In a fight like that, American warships would soon run out of missiles with which to defend themselves and be forced to withdraw and resupply.

But here's the thing: Hypervelocity projectiles are a whole lot smaller than surface-to-air missiles. Each one will weigh just 25 pounds, meaning a ship can carry a whole lot more of them on board, eliminating the fear of running out of "bullets."

Lasers are even better from this perspective. So long as a ship has fuel to power it, a laser can keep firing indefinitely. A laser cannon has, in effect, infinite ammunition.

All this being said, a reality check is in order. As "cool" as these weapons sound (and they do sound pretty cool), and as great as their economics seem to be, there's still a ways to go from Point A (initial, experimental prototypes) to Point B (fully operational, effective weapons systems, deployed across the fleet).

For example, the Kratos-built, Raytheon radar-guided Laser Weapons System (LaWS) that the Navy tested aboard USS Ponce in 2013 and 2014 boasted beam power of 30 kilowatts (kW). That's sufficient to knock a small drone out of the air, but CRS points out that destroying an ASCM or ASBM in flight would require at least an order of magnitude increase in power -- 300 kW, or even one megawatt.

Navy laser cannons aren't capable of this kind of throughput just yet, but they're working on it. In 2015, the Navy tapped Northrop Grumman to take its lasers to the next level by building a new Laser Weapon System Demonstrator (LWSD) capable of at least 150 kW of throughput.

In a separate project, dubbed alternately the "Surface Navy Laser Weapon System" (SNLWS) or the "High Energy Laser with Integrated Optical-dazzler and Surveillance" (HELIOS), the Navy aims to build a laser that will graduate from 60 kW to 150 kW and then 300 kW, and ultimately as much as half a megawatt (MW). A contract is due to build HELIOS in 2018, with initial deliveries scheduled for 2020. In total, the Navy plans to spend nearly $238 million developing this latter weapon over the next five years.

Naval efforts to build a railgun have been ongoing since about 2005, aimed at developing a "cannon" whose "shells" will depend on velocity (Mach 5.9 to 7.4) for their destructive power, and electricity -- not gunpowder -- to propel them. Britain's BAE Systems and privately held General Atomics are the two contractors leading competing projects to build this for the Navy.

Unlike lasers, which would work almost exclusively as defensive weapons operating at ranges of just a few miles, railguns could also function as offensive weapons, defending against incoming missiles one minute and then switching focus to pummel far-away targets at ranges up to 100 nautical miles. According to the Navy, a railgun projectile would strike a target 100 miles distant "with the impact of a train slamming into a wall at 100 mph."

That said, the Navy recently took a step back from railguns, delaying plans to install one on its new Zumwalt-class destroyer, the USS Lyndon B. Johnson (DDG-1002), and sending the weapon back for further testing on land instead.

7. Or your hypervelocity projectiles, either

The same hypervelocity projectiles (HVPs) that these railguns would fire with electricity, by the way, can also be fired with gunpowder from standard 5-inch naval cannons, and even from the Army's 155mm howitzers. Such wider application would turn all sorts of existing Pentagon hardware into potential missile defense platforms on land and at sea -- and enable mass production at a scale all but certain to drive down the price of HVP ammunition.

HVPs will be guided munitions, each weighing perhaps 25 pounds and just 18 inches long. The Navy is still trying to figure out how to miniaturize the electronics, though, and how to harden them to withstand the high stresses and high temperatures involved in being fired at Mach speeds. Even fired from a 5-inch naval gun, HVPs could be fired at speeds of Mach 3, giving them enough kinetic energy to destroy an incoming ASCM -- and a range of 26 to 41 nautical miles.

DoD models show that if every cruiser and destroyer in the fleet were equipped with HVPs for missile defense, the Navy could confidently "knock down 95 to 98" out of every 100 cruise missiles launched at them once they get the technological kinks worked out.

8. What do we want? Lasers and rayguns! When will we get them? Eventually!

As far as the timeline on that development work goes, "years of additional development work" will be needed to make these weapons operational, and even then "ultimate success ... is not guaranteed," notes CRS.

Take lasers for example. These pose plenty of challenges to be overcome -- getting the lasers to shoot straight through atmospheric turbulence, offsetting "thermal blooming" from an energy beam passing through the air, and avoiding them cutting through a target and slicing up some collateral damage on the other side. One more mundane challenge is that "current laser technologies are approximately 30 percent electrically efficient," meaning that for every 1 kW of laser power output, a ship must generate about 3 kW of electric power input. Thus, if a laser needs, say 1 MW of power to knock out an ASBM, the ship carrying that laser must be able to produce 3 MW of power -- per laser cannon -- to operate it.

As for railguns, the Navy ultimately wants to build a weapon that can fire 10 rounds a minute, and hit what it's aiming at -- as much as 100 miles away. CRS quotes Naval Sea Systems Commander Vice Adm. William Hilarides, though, warning that "it will be at least 10 years until the railgun is fielded on new ships and potentially 30 years past that before the Navy considers removing powder guns from the fleet entire in transitioning to energy weapons alone." (Of course, he said that in 2015, so we're now two years into that timeline).

9. The future is coming. Prepare for it

All this being said, development is ongoing, and progress is being made. In the fiscal year 2018 alone, Congress has authorized spending roughly $2.4 billion on R&D work into new weapons technologies -- a huge amount of funds available to the several companies working to make lasers and railguns a reality.

Recognizing this, CRS is advising Congress to start asking the kinds of long-tail questions that need to be answered to accommodate these new weapons systems. For example: "Will the kinds of surface ships that the Navy plans to procure in the coming years have sufficient space, weight, electrical power, and cooling capability to take full advantage of" powerful, electricity-hungry lasers and railguns? Because if they won't have that space, power, etc., then the Navy needs to begin thinking about buying different ships -- and perhaps even reviving General Dynamics' (GD -0.89%) canceled Zumwalt destroyer program, Zumwalt-class ships being among the few able to generate the kinds of power these weapons will require.

Because ready it or not, the lasers and railguns are coming. We need to be prepared.