Sprint has to face some hard truths about competing in wireless.

Sprint (S) missed out on its opportunity to merge with T-Mobile (TMUS -1.20%), and now it's left fighting for itself. That means investing in its network infrastructure. But as CFO Tarek Robbiati noted at a recent investor conference, "When you invest more money you are having to recoup that investment." That means price increases.

Sprint has already taken a small step toward increasing its pricing. It went from offering five lines of unlimited data for $90 per month to five lines for $100 per month. But Robbiati noted there will be more price increases in due course.

That's great news for the rest of the industry. Sprint has continually put pressure on other carrier's service prices. Verizon (VZ -0.77%) and AT&T (T -2.22%) have seen their service revenues decline over the last couple of years. But the ease in competitiveness could allow those numbers to rise once again. 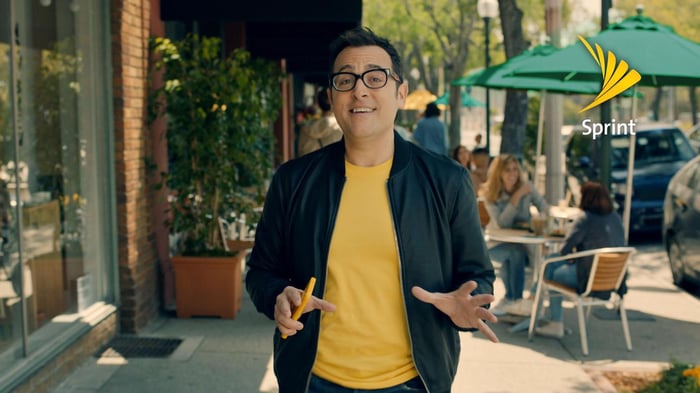 Sprint is out of options

Sprint consistently ranks at the bottom of the competition in terms of network quality. It has the spectrum licenses to build out a better network, but it has limited capital to deploy it. Management has taken to fiscal gymnastics to increase its cash balance, such as selling some of its assets to a sister company and leasing them back.

Raising prices is its only option if it wants to remain even modestly competitive. Price is, by far, Sprint's biggest differentiating factor, which is why Robbiati says, "We will always want to be the price leader." If it wasn't, it would lose a ton of customers to any of its competitors offering a better deal on a better network.

Fewer customers spending more per month may cause some short-term pain. But it's the only option Sprint has to ensure long-term survival without a merger or acquisition.

Everyone else wins big

The biggest winners when Sprint decides to raise its prices are its competitors. Sprint has been one of the biggest catalysts for the intense competitive pressure in the industry. Offering competitive price promotions, including low-priced unlimited mobile data service and lower device prices, forced the hands of AT&T and Verizon to offer similar services and promotions, or risk losing more subscribers.

Sprint's decision to increase prices means it will be able to increase its average revenue per user. But the decision also means competitors will be able to attract customers with fewer price promotions, and could potentially increase prices themselves. Just as important, Sprint's competitors could see lower subscriber churn, or higher gross additions, as fewer customers flock to Sprint, naturally leading to higher service revenue.

Price increases likely mean Sprint will acquire fewer customers going forward. That means more left over for T-Mobile, Verizon, and AT&T. T-Mobile has already noted it's seen a better ratio of customers switching from Sprint (and everyone else) this quarter than last. Verizon's streak of positive postpaid phone subscriber net additions ought to continue after several disappointing quarters. And AT&T might start to turn things around, as well.

Taking advantage of its assets

Sprint already has fallen to the fourth-place carrier in the United States, and its network isn't improving, either. Management needs to find a better way to differentiate itself other than price because consumers are clearly opting to pay a little bit more for better coverage.

Sprint has boatloads of wireless spectrum currently sitting on the sidelines because it doesn't have the capital to deploy it. Most of its unused spectrum is high-band, which requires a more dense network, making it more capital intensive to deploy. The upside is a much stronger and faster network once it's deployed. T-Mobile just went through the process of deploying relatively high-band spectrum, and now has one of the best networks in the country.

If Sprint can survive a few years of capital-intensive spending while customers continue to leave, it could put itself in a much stronger position next decade. There's a lot of risk, however, that it might not be able to complete its network upgrades without the benefit of a merger or acquisition.