Intel's server monopoly is under threat.

Intel's (INTC -0.03%) monopolistic position in the server processor market is under threat now that Advanced Micro Devices (AMD -2.19%) has landed its first big customer win in this space. Microsoft's (MSFT -0.92%) Azure is the first public cloud platform that has decided to deploy AMD's EPYC server processors, which were launched with a lot of hype earlier this year.

AMD has spoken at length about how its EPYC server processors are more powerful and cost-efficient than the competition. Not surprisingly, they have helped the company rack up a string of partnerships with big cloud service providers and data center companies, and it wasn't long before one of them decided to commercially deploy the chip.

The fact that Microsoft has become the first to use the EPYC servers is great news for AMD, and it should start giving Intel sleepless nights. 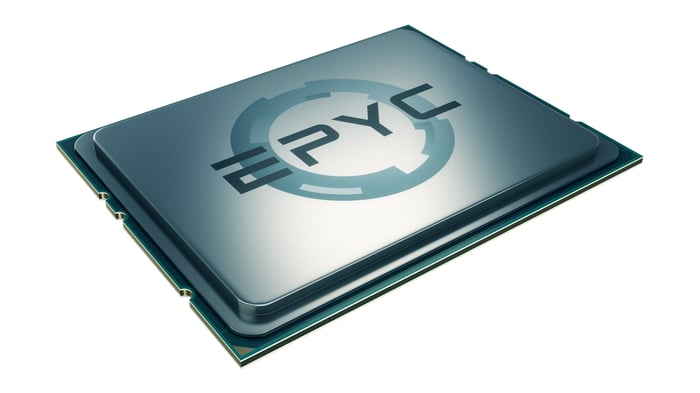 Microsoft launched its ambitious next-generation cloud hardware project, known as Project Olympus, just over a year ago with the aim of creating a standard, open-source hardware ecosystem for providing cloud and enterprise services. In simple words, Microsoft is creating a scalable architecture (known as a hyperscale cloud) that can be deployed by organizations of all sizes, so that they can change components to increase capacity when needed.

Microsoft had made this platform CPU (central processing unit) independent, allowing it to strike partnerships with multiple vendors including AMD and Intel. The fact that Microsoft selected AMD's EPYC processor over Intel's Xeon server processors, which hold a 99% share of this market, is a big vote of confidence for AMD's fledgling platform.

AMD claims that its EPYC processors provide 33% more connectivity options when compared to the competing two-socket solutions available on the market. As a result, they will allow Microsoft Azure's latest L-Series virtual machines to connect to a large number of non-volatile memory express (NVMe) drives, enabling them to tackle storage-intensive workloads.

Microsoft executive Corey Sanders said in a blog post that AMD's EPYC processor was the right fit for Azure's latest Lv2-Series instances (an instance refers to a virtual server in cloud computing) because it can "support customers with demanding workloads like MongoDB, Cassandra, and Cloudera that are storage intensive and demand high levels of I/O." [Bolding added.]

Microsoft's endorsement could help AMD land more wins in the cloud computing space, as more than half of enterprise servers and over 60% of enterprise storage appliances are expected to be running NVMe drives by 2020.

Moreover, this is just the beginning of the AMD-Microsoft partnership as both companies are planning to bring more cloud computing instances to the market in 2018.

AMD's EPYC processors look like a good fit for deployment in hyperscale data centers, a market that's expected to grow at more than 26% a year over the next five years.

What next for AMD?

It won't be surprising if Microsoft selects Intel's server processors in other cloud computing instances as a part of Project Olympus. Both companies have collaborated on the deployment of Chipzilla's Xeon server processors and programmable chips in the cloud, so it remains to be seen how many more wins AMD lands at Microsoft.

But it is likely that AMD can claw back more market share from Intel in this space, according to comments made by Intel VP and CFO Robert Swan at a recent conference. Fellow fool.com writer Ashraf Eassa pointed out in a recent article that Swann talked about "increasing competitive dynamics" in the data center space.

Now, this isn't entirely unexpected as AMD has struck partnerships with a number of Chinese cloud computing players, as well as racking up a collection of OEMs (original equipment manufacturers) such as Dell, Asus, and Acer. Baidu, for instance, has committed to using the EPYC chip in the cloud to power artificial intelligence applications and search.

Moreover, AMD's win at Microsoft isn't the first big one for the EPYC processors. Last month, Hewlett-Packard Enterprise became the first major server OEM to deploy a two-socket server based on the EPYC, boasting that it can tackle a wide range of workloads including analytics and big data. According to HPE, the ProLiant DL385 Gen10 server, based on the EPYC, can slash operational costs by half in each virtual machine, while supporting more cloud computing instances per server.

This is another important contract win for AMD as HPE controls 19.5% of the server market, followed closely by Dell at 18.1%. Now, it won't be surprising if Dell follows HPE with a commercial deployment of its own server based on the EPYC processor. This is because Dell made EPYC a part of its server platform earlier this year, promising availability in the second half of 2017.

Though there is no news of the availability yet, industry watchers expect a launch soon to counter HPE. AMD, therefore, looks all set to gain more traction in the data center space as it has a lot going for it, eventually destroying Intel's monopoly.