Overcoming recalls and jettisoning the Victory brand are the highlights of 2017.

After a rough past two years, Polaris Industries Inc. (PII -1.51%) demonstrated a strong recovery in 2017. Not only was the stock up 53% on the course of the year, the company began to move past the recalls that hampered it and started to show some promising growth again.

As we look back on the year, there were a few highlights investors will remember as keys to Polaris's success long term. 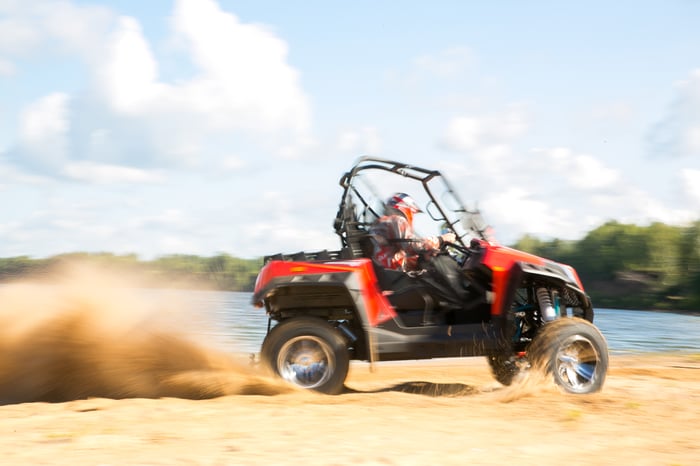 Recalls that hit in 2015 and 2016 had a compounding impact on Polaris, hurting costs as products were fixed and slowing down sales as inventory dropped and customers thought twice about buying a Polaris product. You can see below that the bottom-line impact was swift when it hit. 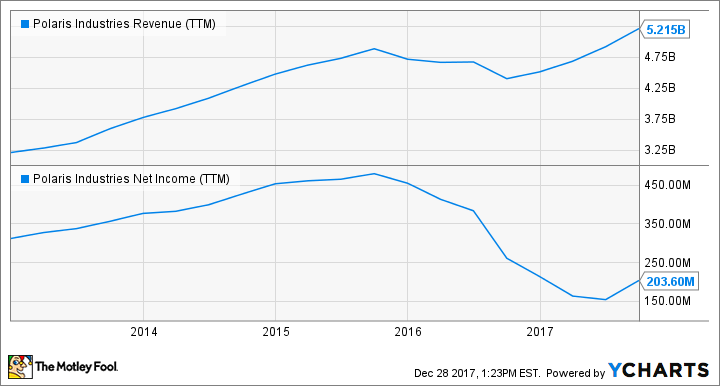 2017 hasn't been recall-free, but they had a much smaller impact on financials this year and didn't take a big dent out of off-road and motorcycle sales. While it'll take some time to recover financially from recalls, and there are some engineering challenges to work out, there's a clear recovery taking shape in 2017.

The improvement can be seen in off-road vehicle segment results in the third quarter. Sales were up 12% to $1.0 billion, and gross margin improved from 24.7% a year ago to 29.5%. Management said RZR shipments, which were most affected by recalls, were a high point for Polaris. The operational challenges aren't over for Polaris, but it appears the company is overcoming them and turning the ship around.

One ship Polaris isn't going to turn around is Victory Motorcycles, a brand it once hoped would compete with Harley Davidson (HOG -2.16%). What ended up happening is the Indian Motorcycles brand has been a huge hit with consumers, so Polaris is shutting down Victory to focus on Indian.

In the third quarter, motorcycle sales dropped 14% at Polaris due to dropping the Victory brand. But Indian and Slingshot sales were up 10%, showing their strength.

Long term, focusing on the Indian brand will be a great move by Polaris, but short term, the company is taking a financial hit with the move. That said, this is a move I think investors will remember as a good one a decade from now.

The Transamerican Auto Parts acquisition was the biggest impact on Polaris financially in 2017. To put the move into perspective, last quarter, the business accounted for $191 million in sales, more than motorcycles or global adjacent markets.

It may be a good idea to move into more downmarket sales, but it also increases complexity in Polaris's business. There's not a lot of overlap between aftermarket sales and being an original equipment manufacturer, so this is a hit or miss kind of acquisition. Eventually, we'll see what the impact is, but right now, it's a big driver of growth and could push Polaris into more vertical integration.

Investors should watch for a continued steady improvement in Polaris's business in 2018, putting recalls even further in the rearview. Sales momentum seemed to pick up in the third quarter, particularly in off-road vehicles and the Victory Motorcycle line, so watch for that to continue. And if that operational improvement continues, this could be another good year for Polaris's stock.

Are Acquisitions Boosting Growth for Polaris?