Please ensure Javascript is enabled for purposes of website accessibility
Log In Help Join The Motley Fool
Free Article Join Over 1 Million Premium Members And Get More In-Depth Stock Guidance and Research
By Lee Samaha - Dec 30, 2017 at 11:32AM

These four picks offer something for growth, value, thematic, and GARP investors alike.

There are two key reasons to buy stocks in the commercial construction sector: the ongoing cyclical recovery in the U.S., and the long-term megatrend of an emerging middle class in countries like China. As a population's GDP growth per head and consumer spending increase, it's going to need offices, warehouses, hotels, and retail centers. That's where companies like United Technologies, Ingersoll-Rand, Lennox International, and Allegion plc come in. Let's take a closer look at why these stocks are good plays on global growth in commercial construction spending. 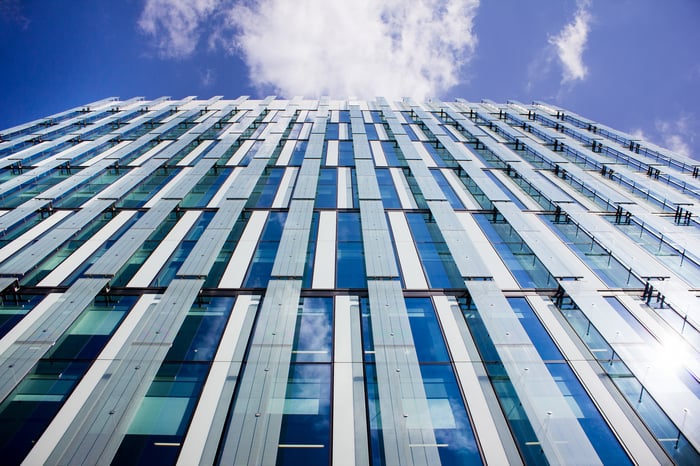 U.S. and China provide a positive outlook for the sector 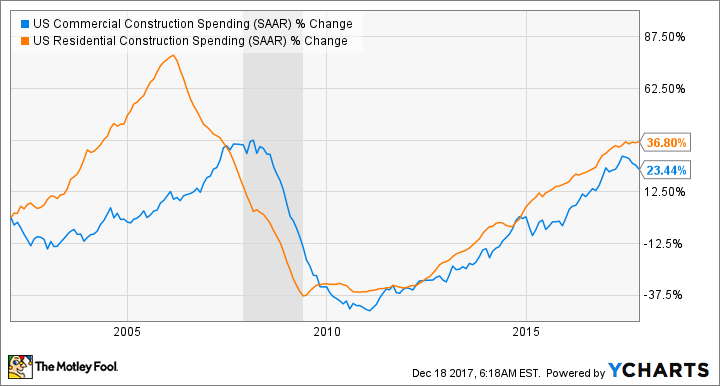 China's importance to the construction industry can be seen in a company like Caterpillar (NYSE: CAT), which generated 30% of its increase in revenue in the first nine months of 2017 from Asia-Pacific construction industries. Meanwhile, despite stagnation in the last few years, China remains the largest single market for elevators, with roughly two-thirds of elevators in the world sold in the country. That's important for United Technologies and its Otis elevator segment, which has been increasing unit orders in a fiercely competitive market, with the long-term aim of generating more profitable recurring service revenues.

Typically, a stock exposed to commercial construction will have the developed world (U.S./Europe) contributing the bulk of its revenue, albeit with low growth, but the higher and more variable growth will come from emerging markets, particularly China.

I think the following stocks are worth looking at.

Don't be alarmed by United Technologies' seeming lack of growth; the company is in a period whereby near-term earnings are being hit as it transitions toward long-term service and aftermarket growth in three of its four segments: Otis elevators in China, Pratt & Whitney geared turbofan engines, and UTC Aerospace adoption of products on new aircraft programs.

With regard to commercial construction, Otis' medium-term (2016-2020) target is for organic 3% to 5% compound annual growth rate (CAGR) in sales while increasing service transformation (percentage of its own equipment it services) in China from 33% in 2015 to above 50% in 2020. Otis aims to use measures such as equipping its workforce with mobile devices connected to elevators through wireless sensors in order to improve its service offering.

Meanwhile, UTC climate, controls, and security is expected to generate organic sales growth of 3% to 5% in the medium term (2016-2020) with 6% to 8% operating profit growth. Commercial HVAC, fire and security products, and commercial refrigeration sales growth will be driven by increasing urbanization, and more stringent energy efficiency and safety requirements.

However, it hasn't been smooth sailing for UTC Climate Controls and Security segment, as all of the major HVAC companies, including Ingersoll-Rand and Lennox International, have faced rising costs due to raw material price inflation in 2017 -- incidentally, USG has also faced rising cost pressure due to rising starch and paper costs.

But here's the thing: Raw material costs are usually cyclical in nature, and pressure may abate in 2018, while HVAC/climate sales in 2017 have been stronger than expected --which helps offset pressure on margin. For Ingersoll-Rand, margin pressure has also come for a good reason -- strong sales growth in strategic growth markets like China and the Middle East -- but it hasn't reduced earnings or cash flow guidance, and the stock remains on an attractive free cash flow-based valuation.

Lennox is primarily a North American-focused company -- around 90% of its sales come from the Americas -- with 44% of its overall revenue coming from commercial customers (HVAC and refrigeration). Lennox has produced impressive growth in earnings and cash flow in recent years (core EPS up 87% and free cash flow doubling in the 2013-2016 period) thanks to margin expansion. Management expects ongoing expansion in the medium term, and if Lennox hits its target of expanding sales from $3.6 billion in 2016 to $4.6 billion in 2020, and operating margin to 16%, then operating profit looks set to increase by 58% from 2016-2020 -- a CAGR of 12.2%.

On a forward P/E of 23 times earnings, it's hard to argue that Lennox International is a cheap stock, but investors are usually willing to pay up for growth, and it's no different with Allegion.

The security doors and locks company has long traded at a premium as investors have bought into the idea that the convergence of electronic and mechanical locks will drive long-term growth. Moreover, the introduction of web-enabled technology will create extra functionality such as the ability to configure locks and manage who is where in a facility.

Allegion's security products will benefit from cyclical growth in commercial construction spending and the secular trend toward electro-mechanical security locks and doors -- management expects to grow EPS at a 12% rate in the long term.

What each stock offers

All four are attractive stocks, and they offer investors something different. Lennox has strong cyclical growth prospects from revenue growth and margin expansion plus some upside from being a potential takeover target. Meanwhile, Allegion's blend of secular and cyclical growth make it attractive for thematic growth investors.

United Technologies is not a pure-play commercial construction stock, but Otis and its climate segment are key drivers of future performance and the stock is a good long-term value option. Meanwhile, Ingersoll-Rand offers margin expansion and increased cash flow generation and is a stock more suited to growth-at-reasonable-price (GARP)-type investors.