The year 2017 gave investors in the Dow Jones Industrials (DJINDICES:^DJI) extraordinary returns, lagging only behind 2013 in terms of total return over the course of the bull market that started right after the financial crisis. However, a handful of stocks managed to lose ground during 2017, holding back the Dow's gains and in some cases raising questions about their long-term worthiness to remain Dow components. General Electric (NYSE:GE), IBM (NYSE:IBM), and ExxonMobil (NYSE:XOM) were the worst performers in the Dow in 2017, and there's no guarantee that they'll be able to mount a big recovery in 2018 without help from their respective industries. 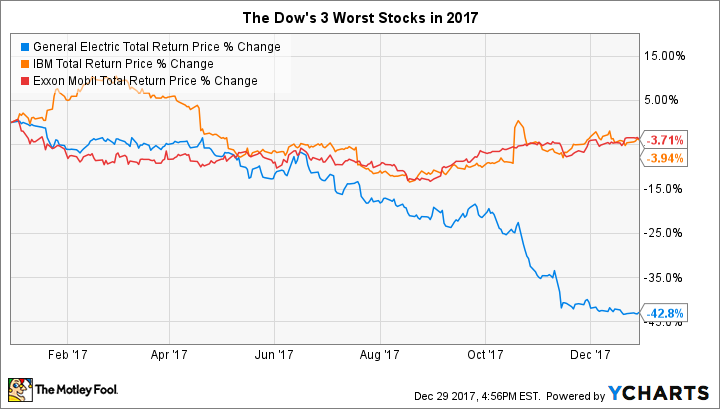 Lights out for General Electric

General Electric was far and away the worst performer in the Dow during 2017, coming close to losing half its value. After seeing CEO Jeff Immelt depart at the middle of the year, investors had to get used to the idea that incoming CEO John Flannery would have to make dramatic changes in order to right the ship and get the conglomerate moving back in the right direction.

Yet months after Flannery took over, investors still aren't sure exactly what GE's long-term strategy will really look like. In the meantime, General Electric has scaled back its near-term expectations for its bottom line, and the company slashed its dividend by half late in the year in order to preserve capital for potential strategic use elsewhere. 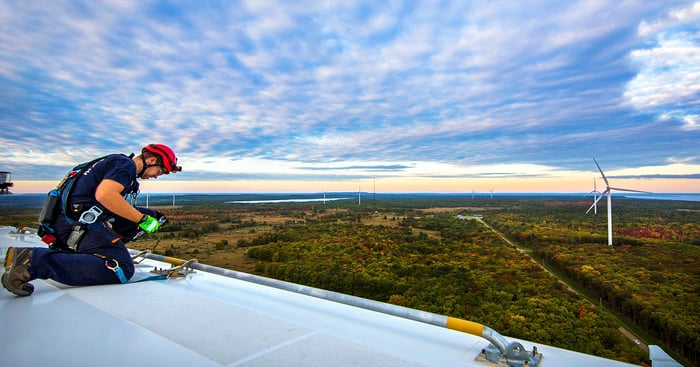 GE's concentration on energy and power has turned out to be ill-timed, and many expect the company to pivot back toward other areas like healthcare. Yet with no guarantee of a rapid turnaround, General Electric stock has fallen so low that those who oversee the Dow might well decide to remove the venerable company from its ranks. To persuade them otherwise, General Electric will have to find higher-growth prospects quickly.

Compared to GE, IBM's 4% decline looks positively attractive. Yet for many, the tech giant's 2017 came as a disappointment, as it has taken longer than expected for Big Blue to turn things around completely. The biggest problem is that IBM is so large that strategic changes take a long time to implement, and upfront expenditures can depress financial results even though they really represent investments in the company's future.

Looking ahead, IBM is confident that high-growth areas like cloud computing and data analytics can continue to bear fruit. At the same time, the drive toward artificial intelligence is gaining traction, and efforts in areas like the Internet of Things, social networks, and blockchain-related technology look promising, as well. With those strategic imperatives along with the possibility for groundbreaking advances in quantum computer hardware, IBM shareholders hope that the company will start keeping up with its tech peers in 2018.

Finally, ExxonMobil declined 4% in 2018. Crude oil finished the year near its highest levels of 2017 at around $60 per barrel, but that hasn't fully taken away worries among industry watchers that there's another shoe left to drop for integrated oil companies.

A longer-term concern for ExxonMobil involves its ability to replace production with new reserves. During 2016, the oil giant fell well short of finding enough new reserves to make up for what it produced, which marked the first time in nearly a generation that ExxonMobil hadn't managed to replace its production. To respond to changing industry conditions, the integrated oil major has looked to diversify its project exposure, mixing extensive long-term development plays with assets that are simpler to ramp up and ramp down.

Even so, some shareholders worry that if earnings don't recover soon, ExxonMobil might have to make a painful dividend cut. That way of following in General Electric's footsteps would be received badly, and if efforts globally to replace fossil fuels with renewable energy sources start to pick up speed, then ExxonMobil could face a long-term challenge that it will find almost impossible to overcome.

Be careful with Dow stocks in 2018

The fact that these three Dow stocks got left behind in 2017's rally doesn't mean that they'll keep falling in 2018, but it also doesn't guarantee a rebound. Only by watching these companies closely will you be able to tell whether they're getting back on track or are doomed to longer-term underperformance.