Stop me if you've heard this before: "The bull run of the past nine years has been so strong there's nowhere left to put your money." Such is the sentiment across much of Wall Street right now, and rightfully so -- we just broke a record with 14 consecutive months of stock market gains.

While it is prudent to be cautious, there's nothing wrong with a little cautious optimism, especially when it comes to investing in Chinese growth stocks. That's because ever since the bull market started on March 9, 2009, the Shanghai Composite Index has drastically under-performed the S&P 500. 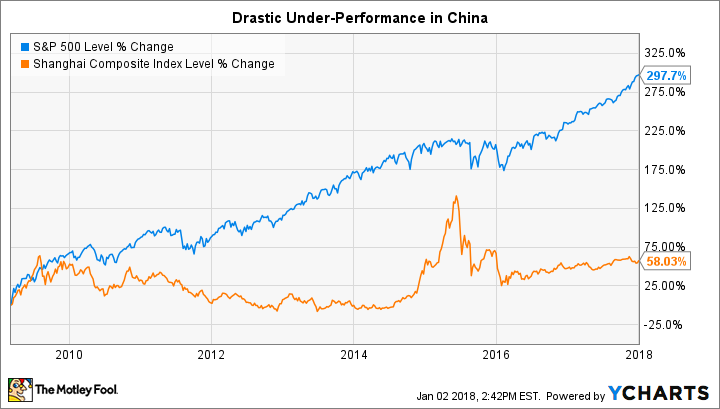 While that's not a perfect proxy for how American-listed Chinese companies have done, it shows a marked difference. Investors became skittish after multiple frauds were uncovered in the Middle Kingdom five years ago, and many aren't comfortable investing in companies located halfway around the world under a Communist regime in the first place.

But the five Chinese growth stocks I'll be introducing you to today all have significant and provable operations that are gaining popularity in what will soon be the world's largest economy.

No company offers broader exposure to Chinese tech growth than Tencent Holdings (OTC:TCEHY). While it is valued at over $500 billion, there are no signs of growth slowing. Last quarter, revenue jumped 61%, with strength across the board.

To get an idea of how broad Tencent's portfolio is, consider that gaming revenues -- the biggest contributor to the top line -- grew by 48% last quarter. At the same time, social media revenue from QQ and WeChat grew 56%, and online advertising offered across Tencent's media platforms jumped 48%.

Management has taken a very VC (venture capital) approach to using excess cash. It owns parts of many smaller Chinese companies -- like one you'll read about below -- as well as others in the United States, like Tesla, Snap, and Spotify.

The real kicker is that you can buy shares now for just 38 times trailing free cash flow. That may not sound cheap, but I think it's a very fair price for a company that offers all that falls under Tencent's umbrella.

Investments made in 2007 are finally starting to pay off

When e-commerce started emerging in China, Alibaba was the runaway winner. That's because the company's first-mover status established it as the top dog. If you wanted to buy or sell anything online, you used Alibaba's platform. That mindshare offered huge rewards to investors, as it was a relatively capital-light approach.

But that also left an opening for a company to vertically integrate the entirety of e-commerce, controlling everything from the online platform to inventory to fulfillment centers to even the delivery services. Way back in 2007, that's the approach that JD.com (NASDAQ:JD) settled on, and it's finally starting to pay off.

Last quarter, sales increased 38% as more Chinese citizens utilized the web for shopping. Just as important, it's unlikely anyone will be able to quickly match the scale that JD began building out over a decade ago: it has over 256 fulfillment warehouses in China, and 6,900 drop-off and pickup locations. It even controls the last mile of delivery, offering same-day or next-day shipping in over 1,400 Chinese counties or districts. Not even Alibaba can match that.

And yet, for all the potential, shares are trading for just 28 times trailing free cash flow, a very fair price for a company with such a bright future.

The online travel wars have ended, and this company is the winner

For a few years there were pricing wars happening in China that were devastating the bottom lines of several online travel agencies. While Ctrip.com (NASDAQ:TCOM) was the top dog, rivals like eLong and Qunar were able to undercut Ctrip and operate with razor thin margins, slowly stealing away business.

But that all came to an end in late 2015 when eLong was acquired, and Qunar effectively became a part of Ctrip. Once that occurred, there was only one place for Chinese citizens to go to book their airline, bus, train, and hotel travel: Ctrip. 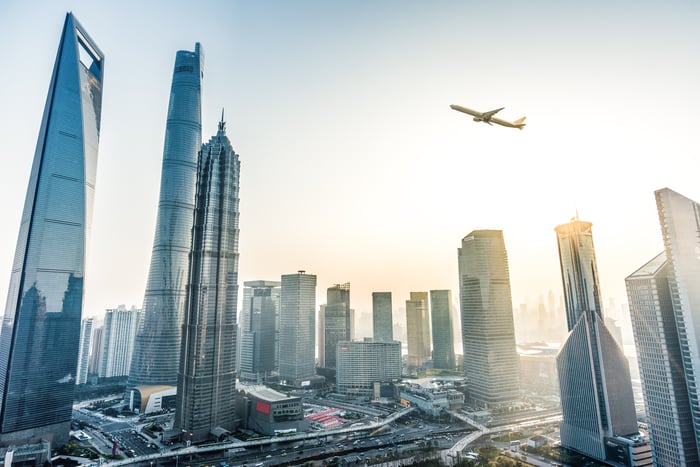 That created an impressive network effect. Travel vendors knew they had to list on Ctrip to get deals in front of customers, which attracted customers to the site, which attracted even more customers...and so on. That meant that Ctrip could charge slightly more for its services, pocketing a greater percentage of each transaction -- all while steadily growing the business.

While the days of super-heady growth may be over, management still expects sales to jump over 25% moving forward. Shares are trading for 38 times expected 2018 earnings, which isn't cheap, but a virtual monopoly on the industry is a powerful force you shouldn't ignore.

Baidu (NASDAQ:BIDU) can accurately be referred to as the "Google of China". While many other comparisons don't match quite as closely, that isn't the case here.

Both companies derive the lion's share of sales from advertising. Both rely on data gathered from all of their free products (search, maps, videos, etc.) to offer up such ads. But neither is resting on its laurels. Google changed its name to Alphabet to highlight its "Other Bets", while Baidu also has several irons in the fire.

The company's foray into an online-to-offline (O2O) ecosystem seems to be sputtering, but management's cost-cutting there has helped improve margins. Now the focus has turned to a combination of it iQiyi video service and artificial intelligence. The latter includes a virtual assistant for home, and autonomous driving software.

Those potential catalysts, plus an advertising business that's once again growing after a series of unfortunate events led to a short-lived stall, give Baidu a lot of momentum heading into 2018. Currently, shares trade for just 22 times trailing free cash flow -- a very favorable price for investors buying in today.

A small-cap with big backers

Finally, we have Bitauto Holdings (NYSE:BITA), which is focused on the car-buying industry in China. The company's bread and butter since its foundation was providing a platform for dealerships to show their goods, create advertising campaigns, and chase after potential leads. 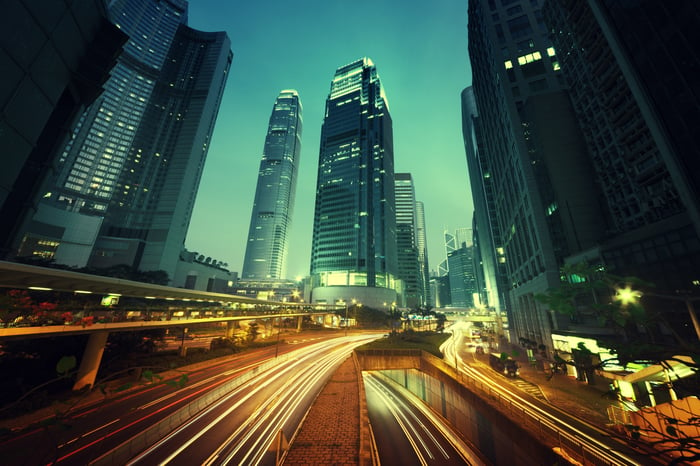 But a booming new business surfaced in 2015 -- auto-related financing. Later dubbed Yixin Capital, this subsidiary of Bitauto focuses on either providing financing for car-buyers in-house, or helping to connect dealerships, buyers, financiers, and insurance agents with one another. Business is booming for Yixin, and it is co-owned by some of the aforementioned big names: Tencent, Baidu, and JD.

But here's the real cherry on top: Yixin -- currently trading in Hong Kong -- is valued at $5.1 billion. That means Bitauto's 44.4% stake in the company is valued at $2.26 billion. And yet, as of this writing, Bitauto -- traded on the New York Stock Exchange -- rings in with a market cap of just $2.4 billion. That means that all of the business that falls outside of Yixin -- advertising, dealership listings, etc -- is virtually free!

Spread the love around

I personally own four of the five stocks mentioned above, and plan on buying Tencent in the near future. For investors who are worried about opportunities for growth drying up in 2018 and beyond, I think all five of these companies offer excellent prospects.