Technology stocks performed very well in 2017, with the Nasdaq 100 index (which tracks tech stocks) gaining more than 37% over the year. But that doesn't mean tech stocks are finished growing. If you're looking for long-term tech investments, you can still find strong tech companies that should leave you looking back on 2018 with delight.

We asked three Motley Fool contributors what tech stocks are looking good in January, and they came back with Etsy (NASDAQ:ETSY), Square (NYSE:SQ), and Shopify (NYSE:SHOP). Read on to find out more. 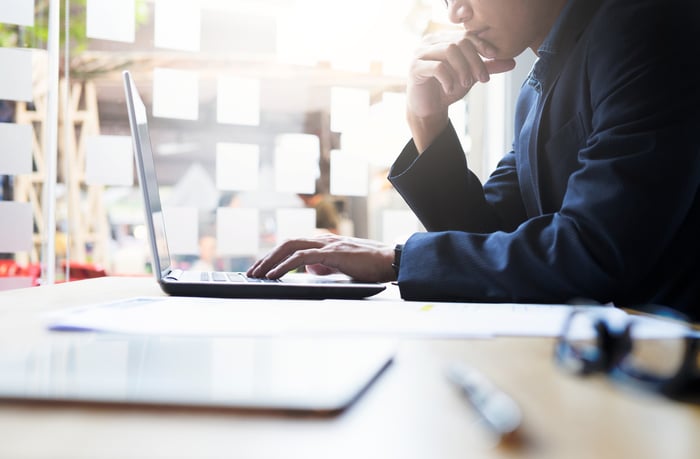 An e-commerce site ready for its closeup

Jeremy Bowman (Etsy): Crafty online marketplace Etsy struggled through 2017. The company experienced two waves of layoffs and a change in its CEO after activist investors sensed the need for a shakeup. The moves seem to have worked, as the stock has risen 82% since May when activist investors like Black-and-White Capital first acquired a stake.

But there's good reason to think that the stock could continue moving higher through January in anticipation of the company's fourth-quarter earnings report. The holiday season is generally a bonanza for retailers, as sales and profits surge in the weeks before Christmas, but Etsy has mostly missed out on the party. While sales on the platfrom do rise in the fourth quarter, it doesn't get the same spike that other retailers do, which is surprising considering many of the wares on the site are perfect for gifts.

New CEO Josh Silverman spotlighted this as a problem in the company's most recent earnings report, saying that historically shopping on the site had fallen off in Mid-December, a time when it usually peaks at other retailers, especially online retailers, which help consumers save time in the last-minute crunch of Christmas shopping. Shoppers didn't think Etsy could compete with discounts or fast shipping.

This year the company has provided tools for its merchants to help shoppers find gifts or items on sale and get fast or free delivery. We won't know how Etsy fared until the company reports earnings in February, but we do know that holiday sales experienced their biggest spike since 2011 and that online sales were up 18% during the period, according to Mastercard'sShopperTrak.

That's a bullish sign for Etsy to top estimates in the key holiday-quarter report coming up.

Hip to be square

Todd Campbell (Square): A financial company with a technology kicker, Square is my top technology stock to buy this month.

Square's hardware and software solutions connect merchants to buyers at craft shows, retail stores, and online, and its agnostic approach means it can process payments regardless of whether they're made by tap, dip, or swipe.

Square's APIs allow sellers to integrate Square with their other business systems, and Square's software allows them to track their sales from any device, anywhere, at any time. According to CEO Jack Dorsey (who, by the way, is also Twitter's CEO and a Bitcoin investor), Square-connected apps have been built for "everything from tea shops to taxis."

Greater integration with other business software solutions, such as SAP Business One, allows Square to compete for bigger, revenue-friendly accounts. E-commerce, invoicing, and instant cash connect Square more deeply with its merchants while providing it with a bigger share of their sales. For example, Square gets a flat 2.5% of sales when its reader is connected to a merchant's device, like a tablet, but it collects a 2.9% rate, plus a $0.30 per transaction fee, for e-commerce transactions, and a 3.5% rate, plus a $0.15 per transaction fee, for virtual terminal and keyed-in transactions.

Sales are growing at an over-30% clip, and I think buying shares ahead of fourth quarter earnings in February makes sense. A larger customer base and a strong holiday season could allow Square to overdeliver on its forecasted net revenue of between $585 million to $595 million and adjusted EPS of between $0.05 to $0.06. Still looking for reasons to add Square to your portfolio? Consider that Dorsey's well-versed in cryptocurrency and blockchain, and his plans likely include positioning Square to benefit from both.

Chris Neiger (Shopify): E-commerce is hardly a new investing idea, but unlike the old days where investors were essentially focused on big players like Amazon.com, there are now plenty of smaller players that are making big waves in this space. Shopify is a case in point.

Shopify provides cloud-based platform software and services to small, medium, and large businesses, and its wide array of offerings and tiered pricing have propelled the company from a niche player into a merchant platform powerhouse.

Merchants can use Shopify's platform for everything from online and mobile payments to shipping orders and social media management. The tiniest small business can tap into Shopify's services for as little as $9 per month, but its largest customers shell out up to $40,000 a month for the company's top-shelf Shopify Plus services. The company is doing a fantastic job winning bigger customers, and as a result Shopify Plus accounted for 20% of monthly recurring revenue (MRR) in the third quarter 2017.

Companies big and small are seeing the benefits of Shopify's platform, and since 2015 the company has grown its total subscribers from 200,000 merchants to more than 500,000. Shopify's top line is growing quickly as well, with sales in the third quarter growing by 72% year over year and transactions conducted through the company's platform increasing by 69%, to $6.4 billion.

Investors should know that the company isn't profitable right now, but the expansion of the e-commerce market should help the company to continue to grow. U.S. sales from e-commerce are expected to hit $638 billion four years from now, up from $409 billion last year.

Shopify's shares have already jumped 138% over the past 12 months, but that doesn't mean the stock has finished its run. The company needs to continue releasing in-demand features for its platform (which it's already doing) and grow its merchant customer base and earn more from each of its customers (which it's also doing) -- and if it keeps that up, then investors will be pleased they added this stock to their portfolio now instead of waiting on the sidelines.