Apple (NASDAQ:AAPL) component supplier stocks turned in a mixed performance last year thanks to concerns regarding iPhone production. It originally appeared that the Cupertino-based company wasn't well-prepared to meet the outsized demand for the highly popular iPhone X because of yield issues on certain components such as 3D sensing chips and OLED panels.

But Apple put all fears regarding production bottlenecks to a rest when it issued sales guidance for the holiday period. However, investors still aren't appeased. Key Apple suppliers such as Skyworks Solutions (NASDAQ:SWKS) and Broadcom (NASDAQ:AVGO) bore the brunt of the supply chain speculation despite their strong positioning in the latest iPhones, with one of them underperforming the broader NASDAQ-100 Technology Sector Index by quite some margin. 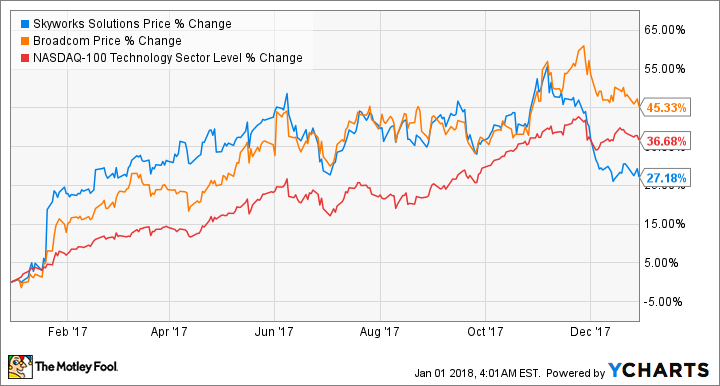 Though Broadcom has performed relatively well compared to Skyworks, its shares have sold off in recent weeks thanks to speculation that sales of the iPhone X are cooling down. But both chip stocks might get a big Apple-related boost in 2018 despite Wall Street's short-term concerns. Let's see why.

Skyworks Solutions is busy diversifying its revenue by tapping Chinese smartphone manufacturers and moving into the Internet of Things, but it still gets a major chunk (around 40%) of its business from Apple. In fact, a teardown of the latest iPhones indicates that Skyworks enjoys a solid presence across all devices, supplying the same number of chips it did in last year's phones.

Piper Jaffray forecasts that there's a difference of just $0.90 in the amount of radio frequency content used by Apple in the high-end iPhone X and last year's iPhone 7.

Noted Apple watcher Ming-Chi Kuo of KGI Securities forecasts that Apple's 2018 iPhone sales could average 250 million units, an increase of 16% from last year's forecast of 215 million units. This estimate doesn't seem outlandish given the popularity of the iPhone X, and any increase will be a boon for Skyworks.

Apple has had difficulty keeping production of its latest flagship device on par with demand, so much so that it has made a $390 million advance to one of its suppliers to boost capacity. Consequently, the speculation regarding weak iPhone X demand should be taken with a pinch of salt. The unnamed Taiwanese sources that are proliferating the claim are obviously missing the news that Apple is ramping up demand for necessary components such as 3D sensing chips and OLED screens.

Apple wouldn't have made such a big investment if it wasn't looking forward to a blockbuster sales year in 2018. Skyworks Solutions will benefit from higher iPhone builds in 2018 as it has maintained its chip spots in Apple's current generation devices.

Broadcom was touted to be one of the biggest winners from the current generation of iPhones, as its gains won't be limited only to Apple's production numbers. The chipmaker was expecting a 40% jump in its dollar content in the latest iPhones. This turned out to be true as Broadcom is reportedly supplying eight chips to an iPhone unit this time as compared to five just a year-ago.

The spike in Broadcom's iPhone content this year can be attributed to the inclusion of wireless charging in the new devices. Cupertino is using the chipmaker's BCM59355 charging controller to enable this feature, as well as other radio frequency chips and a touchscreen controller. 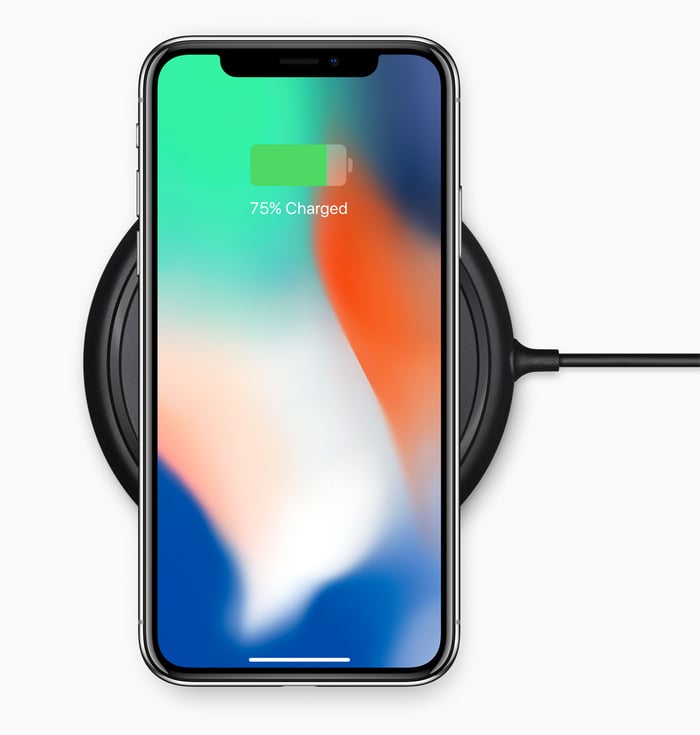 Not surprisingly, analysts expect Broadcom's revenue to rise almost 19% in fiscal year 2018 as it relies on Apple for one-fifth of its revenue. But it can do better considering Kuo's forecast of a substantial rise in iPhone builds and the chipmaker's enhanced content in the new devices. Broadcom forecasts a strong start to the New Year, calling for sequential growth in wireless revenue thanks to "the ramp in demand from our North American customer."

This is unlike the last two years when the company's first-quarter wireless revenue has declined because of a cool down in iPhone production. So, Broadcom investors shouldn't panic based on recent speculation that iPhone X demand is slowing down as the company's forecast clearly indicates that it is on track to do well in 2018 thanks to its strong Apple relationship.

Similarly, Skyworks should be able to take advantage of an increase in iPhone builds this year as it has maintained its standing at Apple too. This is why investors might want to give these two stocks a look, especially in light of the recent dips in the share prices of both companies.