Flying a plane with solar energy alone may seem like a far fetched idea, but it's now a reality. In 2016, a prototype plane built by Solar Impulse with a single pilot flew around the world on nothing but solar energy, a first for humanity. A number of companies are trying to take that test flight from prototype to commercial viability.

A realistic commercial application for solar-powered aircraft could be drones flying high above earth where energy requirements to maintain altitude are lower. High altitude, long-endurance (HALE) aircraft could perform surveillance, monitoring, and even beam internet down to earth. That's why it's notable that new agreement between AeroVironment, Inc (NASDAQ:AVAV) and SoftBank Corp could make solar powered HALE aircraft a reality. 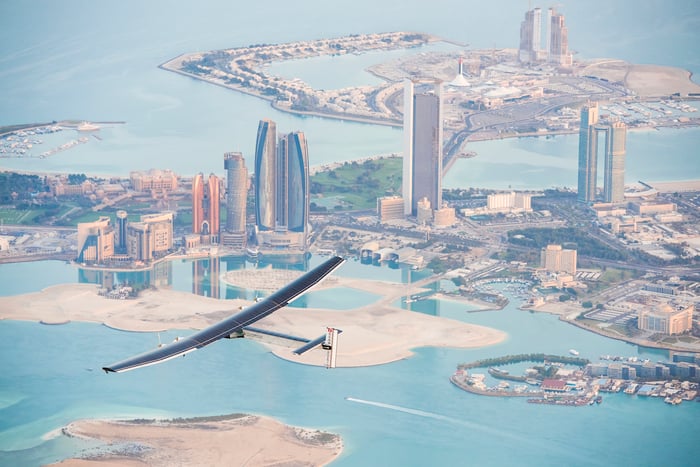 The solar drone of the future

Aerovironment's agreement with SoftBank will form a joint venture called HAPSMobile to develop solar-powered HALE drones for commercial use. The business will fund development of up to $65.0 million in value and Aerovironment is contributing $5 million for a 5% stake with the option of increasing the stake to 19% at the same cost basis.

The aircraft design and development along with ground control stations for flight testing and certification will be done by Aerovironment. Here's an outline of what the companies said about the deal in the press release:

Aerovironment has tested HALE drones before, most notably with the Helio and Pathfinder aircraft that flew as high as 96,863 feet. But the company never got past the research and development phase to commercial sales, so this is a big breakthrough in turning solar-powered HALE drones into a real business.

This is important because it shows that solar-powered flight has promise and it'll begin unlocking the nearly unlimited applications for HALE drones. As essentially a quickly deployable, low flying satellite the drone can perform a lot of commercial operations that will have value for commercial and government applications.

Facebook (NASDAQ:FB) has tested a solar-powered drone intended to bring the internet to remote locations around the world. You can imagine this being a valuable technology after a natural disaster like Hurricane Maria that devastated Puerto Rico and other Caribbean islands, where power was cut to telecommunication lines.

Surveillance for military applications is a clear use case, potentially providing both higher quality images than a satellite but also the ability to rapidly deploy aircraft to cover a new area of interest. And flying over 60,000 feet means a HALE drone isn't noticeable from the ground in the way a lower flying drone can be. Using HALE drones to monitor fires like the ones burning in California could also be a good commercial application.

Given the ability to quickly launch a HALE drone and the different telecommunications and monitoring technology that could be included on each flight, this is a business that has a lot of potential for Aerovironment and Softbank. The partnership could also create an easy "go to market" strategy with Softbank's involvement given its ownership of telecommunications assets in the U.S. and Japan. BI Intelligence estimates that drone sales will be $12 billion globally by 2021 and while solar HALE drones may be a small subset of those sales, they have a business case that's easy to identify from the outset. And with a likely price tag over $1 million apiece, there doesn't have to be a lot of units sold to make a big impact on Aerovironment's business.