Please ensure Javascript is enabled for purposes of website accessibility
Free Article Join Over 1 Million Premium Members And Get More In-Depth Stock Guidance and Research
By John Rosevear, Travis Hoium, and Daniel Miller - Jan 11, 2018 at 6:05AM

The biggest news in a year that was huge for electric-vehicle technology.

We might someday look back at 2017 and decide it was the year in which the electric car became inevitable. Most of the major automakers, even longtime battery-electric skeptic Toyota ( TM 1.54% ), announced some sort of plan to develop battery-electric vehicles in 2017. Meanwhile, as sales of General Motors' ( GM 2.82% ) Chevrolet Bolt EV grew steadily, electric-car upstart Tesla ( TSLA 4.24% ) moved ahead with its long-awaited mass-market Model 3 sedan -- and revealed a couple of surprises toward the end of the year.

We asked three of our Foolish investors to talk about what they saw as the biggest stories around electric vehicles in 2017. Here they are.

General Motors: The Bolt was just the beginning

John Rosevear (General Motors): Two things made 2017 the year General Motors solidified its position as a leader in the race to build electric cars at scale. First, sales of its Chevrolet Bolt EV, the first long-range electric vehicle with a mass-market price tag, rose steadily through the year following its introduction in late 2016. 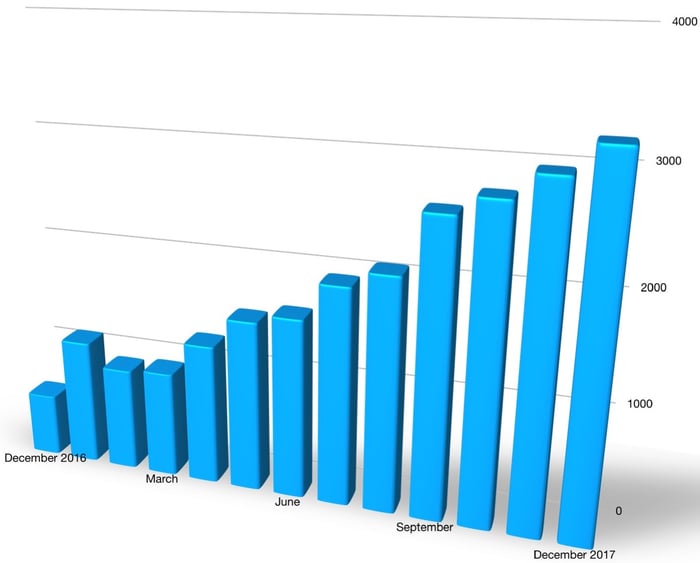 Data source: General Motors sales reports. Chart shows U.S. sales of the Chevrolet Bolt EV for every month since its launch in December of 2016.

Second, GM finally lifted the curtain on its plan to follow up the Bolt. Not surprisingly, given GM's lead over most of its traditional automaking rivals, the plan is an ambitious one.

GM said in October that it will launch "at least 20" new all-electric vehicles by 2023. The first two, due by early 2019, will use the technology developed for the Bolt. Most of the vehicles to follow will use an all-new battery-electric vehicle architecture in development now. GM expects that new architecture to deliver something that no electric car has yet managed: solid profitability.

GM confirmed in October that it has a slew of new all-electric vehicles in development. At least 20 will come to market over the next six years. Image source: General Motors.

Not all of GM's new electrics will be battery-powered, however. GM has been working with Honda ( HMC 1.98% ) on a low-cost hydrogen fuel cell suitable for vehicle use. (A fuel cell is a device that chemically converts the energy in hydrogen gas to electricity, emitting only water vapor.)

GM thinks hydrogen fuel cells have advantages over batteries in certain applications where vehicle weight, recharging times, or both are issues. Think first responders, heavy trucks, or military vehicles, for example. GM is looking at all of these markets now.

Lots of other big (and not so big) automakers announced plans for electric vehicles in 2017, of course. Some are more hopeful visions than actual plans. But the Bolt's existence (and success) indicate that GM's intentions should be taken very seriously.

Daniel Miller (Tesla): It seems as if every other week Elon Musk, CEO of Tesla, announces some wildly ambitious project. His projects include anything from the hyperloop, which would shuttle passengers from San Francisco to Los Angeles in minutes, to reusable rocket ships. It should come as no surprise, then, that one of the top electric-car stories comes from Tesla: its intriguing electric Semi.

In terms of specifics, Tesla's Semi is pretty impressive. While many expected the Semi to drive between 200 to 300 miles on a single charge, it rolled out with a 500-mile range -- and that's with an 80,000-pound load! That was enough to hush critics who were worried about range, especially considering 80% of freight in the U.S. is moved less than 250 miles. Similar to its network of Superchargers, Tesla will develop a new network of Megachargers that are designed to deliver a charge capable of 400 miles in just 30 minutes. 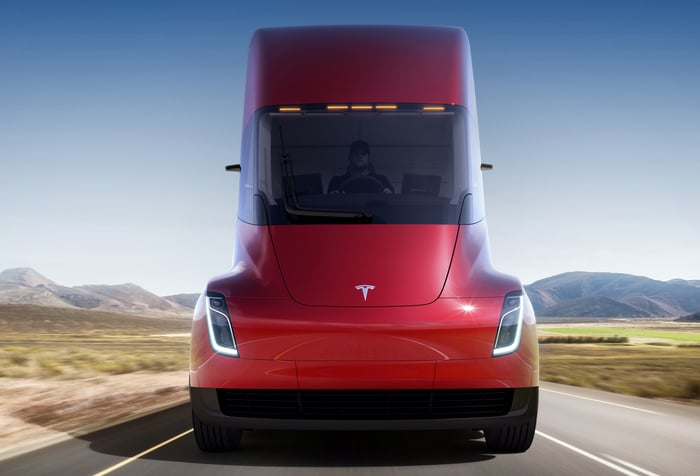 And while Tesla's Semi is a way out from bearing fruit for the company's financials, it's certainly tantalizing for investors. Consider that Piper Jaffray analyst Alex Potter noted that the market for semis could represent a revenue opportunity of more than $100 billion annually for Tesla. For context, that $100 billion is roughly 10 times Tesla's trailing-12-month revenue total.

Tesla has a history of overpromising and underdelivering, as well as taking on risky projects such as its acquisition of Solar City. But if Tesla can deliver an incredible electric-semi product and start building another pillar of revenue for the company -- one that will hopefully generate profits sooner rather than later -- this will easily be one of the biggest electric-vehicle stories from 2017.

Travis Hoium (Toyota): The one automaker that's long been a holdout in the electric-vehicle revolution has been Toyota. It was a leader in hybrids, but it bet heavily on hydrogen fuel cells and never bought into the idea that battery technology and costs would fall fast enough to make it a competitive product in the market.

In December, Toyota made an about-face and promised "more than 10" battery electric vehicles by the early 2020s. It's not going all-in on battery electric vehicles, hedging its bets with hydrogen fuel cell technology it thinks will eventually be viable for passenger and commercial vehicles. But the fact that by "around 2025" every Toyota and Lexus model will be available in some sort of electrified option is a huge turnaround.

Toyota has long been skeptical of battery-electric technology, investing instead in hydrogen fuel cells to power cars like its Mirai. But the company finally embraced batteries -- somewhat -- in 2017. Image source: Toyota.

To reach scale in EVs, Toyota has partnered with Panasonic, which is also Tesla's battery partner. That'll give it access to industry-leading battery technology at competitive costs. And it's easy to argue that Toyota could give Tesla a run for its money if it decides to invest the resources in a mass-market electric vehicle.

Outside of some niche players, there don't seem to be many holdouts against electric vehicles in the auto market, and now that Toyota has joined the trend, I think it's clear the days of fueling up with gasoline are slowly coming to an end. By 2025, there will be dozens of automakers making electric vehicles, each trying to top each other on cost and features. As investment goes up, EVs will be more competitive with fossil fuels and Toyota has shown that the dam is about to break in the EV revolution.