The Reality Shares Nasdaq NexGen Economy ETF (NASDAQ:BLCN) is a new ETF that offers investors quick-and-dirty exposure to companies that will benefit from the rise of cryptocurrencies and blockchain.

At least that's the pitch. Reality Shares is striking while the iron is hot, launching this fund at a time when the mere addition of "blockchain" to a corporate name can send a company's stock doubling or tripling in a day.

But before diving in to this ETF head first for the promise of blockchain riches, there are a few things you should know about this new exchange-traded fund.

An ETF is only as good as the index it will track, so it's important to get familiar with the index and how it works before investing in it. The Reality Shares Nasdaq NexGen Economy ETF is a passively managed fund, meaning it will track an index just as plain-vanilla S&P 500 ETFs track stocks in the S&P 500 Index.

Officially, this ETF will track the Reality Shares Nasdaq Blockchain Economy Index, which is comprised of stocks that are "committing material resources to developing, researching, supporting, innovating or utilizing blockchain technology for their proprietary use or for use by others," according to regulatory documents. 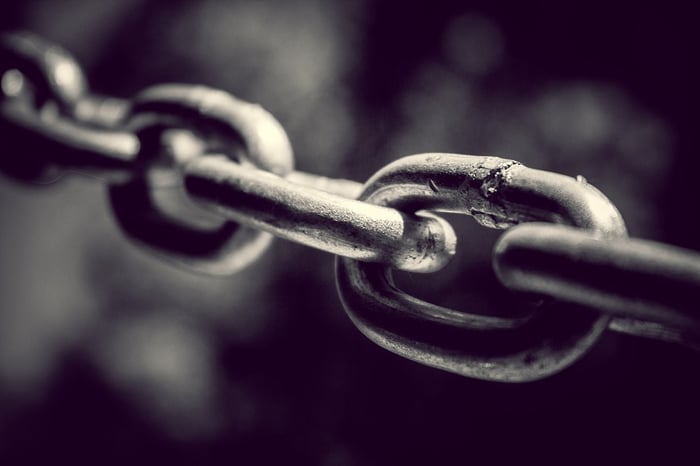 To create the index, Reality Shares and Nasdaq will compile a list of blockchain-related stocks and rank them by a proprietary "Blockchain Score" to identify the companies that are expected to benefit most from blockchain technology. In all, the index will be comprised of 50 to 100 companies with the highest Blockchain Score. Stocks are weighted based on their score so that the fund invests more of its assets in companies that have more blockchain exposure.

The index has some safeguards, notably a requirement that stocks in the index have a market capitalization greater than $200 million and six-month average daily trading volume in excess of $1 million. To be clear, although the ETF and index have "Nasdaq" in the name, it will invest in stocks listed on other markets, including companies that are listed on exchanges overseas.

For small investors, the fee isn't particularly burdensome, given that this ETF does offer exposure to as many as 58 stocks, which may be less expensive to buy and sell through an ETF than on an individual basis.

3. Stocks it owns and its rebalancing schedule

Not surprisingly, this fund is heavily invested in software and technology-related companies, making it as much of a tech ETF as it is a blockchain ETF. The 10 largest holdings in the blockchain ETF are detailed in the table below.

Whether or not these companies have real blockchain exposure can be debated. On one hand, Overstock.com has very obvious exposure to blockchain, given its investments in tZERO, a platform for trading cryptocurrencies.

On the other hand, it's difficult to lay the case that Microsoft has meaningful, needle-moving exposure to blockchain. After all, the company posted profits of $6.6 billion last quarter alone; it would take a lot for the blockchain to provide real growth to its bottom line.

A good way to bet on the blockchain?

I like the fact that the Reality Shares Nasdaq NexGen Economy ETF takes an indexed approach to stock selection, which makes it slightly more transparent than the actively managed Amplify Transformational Data Sharing ETF.

That said, this index is inherently imperfect. It's really a tech ETF by another name, with a handful of online retailers and banks mixed in for good measure. I'm not sure it's the best way to bet on blockchain, but for now, it's one of the only ways.