After the housing collapse hit the economy hard, homebuilders were absolutely devastated and had to take a hard look in the mirror. As KB Home (NYSE:KBH) assessed what it needed to do to get back into fighting shape, management put together a plan that it hoped to complete by 2019. Based on the company's fourth-quarter earnings result, it looks as though it is awfully close to meeting those goals already.

Let's take a look at what happened this past quarter at KB Home and what investors can expect in the coming year. 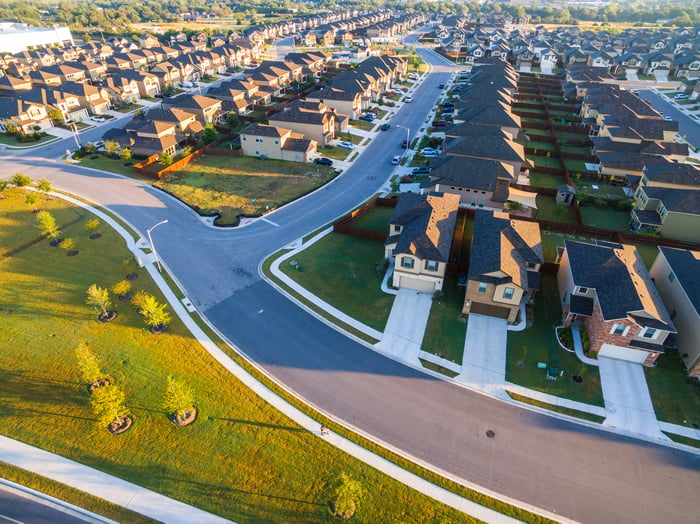 It's a euphoric time for homebuilders lately, and KB Home is benefiting just like the rest. The company delivered a 17% increase in homebuilding revenue from more home deliveries (up 9%) and higher average selling prices (up 8%). Almost all of those rising home prices came from its operations in California, though, as home prices for its other three regions were flat to slightly positive. Considering that 50% of its revenue comes from California, though, that isn't necessarily a bad thing for now. Also, the company was able to replace all of its deliveries with new orders as backlog grew by 9% to $1.6 billion.

There are signs that KB Home's growth and larger scale are starting to pay off. Its sales, general, and administrative costs were kept at a modest 8.7% of total revenue, which is one of the best results among its homebuilder peers. As a result, the company's net profit margins and rates of return continue to improve. Management has a goal of a return on equity in the 10% to 15% range.

As part of that goal, KB Home wants to lower its total debt burden and improve its capital structure. Back in 2013, debt to capital peaked at more than 80% as the company continued to take huge net income losses that reduced the book value of equity. Management wants to get to a target debt-to-capital range of 40% to 50% in the near term future. As it stands today, debt to capital has improved to 54.7%. If you include the $720 million in cash on the books, then net debt to capital is 45.4%. So overall, the company is close to getting the business within these target ranges. Once that happens, don't be surprised if we see some more shareholder-friendly initiatives soon.

Here's CEO Jeffrey Mezger's statement from the earnings press release on what he expects in the coming year:

As we look to 2018, we expect conditions will remain favorable in most of our served markets, with solid demand for housing driven by healthy employment, rising household incomes and strong consumer confidence, and continued limited supply. With a robust backlog of approximately $1.7 billion, we believe we are well positioned to continue our momentum toward achieving our Returns-Focused Growth Plan targets. Our main priorities for 2018 are to further accelerate our financial performance, grow our community count, and enhance long-term stockholder value.

One element that will likely boost KB Home's bottom line is the change to the corporate tax rate. This past quarter, the company had a realized corporate tax rate of 38.6%. Once those tax changes go into effect, it will likely lead to much higher net income results. It should be noted, though, that the company has $630 million in deferred tax assets on its balance sheet, so it likely won't have to spend any cash to pay those taxes for some time.

With the company's deleveraging nearly complete, an improving housing market, and a tax cut coming in 2018, things are looking up for KB Home. As Mezger said, the company is likely going to do some things to enhance long-term value of the company. Management has held its dividend steady at $0.10 per share annually since 2013. It wouldn't be surprising if we saw that payout increase this year.

If there is one thing of concern with KB Home, it's the company's high exposure to the California housing market. If that state's housing market were to swoon for some reason, KB Home would get hit harder than most of its homebuilding peers.