PayPal Holdings Inc. (NASDAQ:PYPL), a pioneer in payments and transactions, is set to announce its fiscal fourth-quarter 2017 earnings at month's end, on Jan. 31. I can't blame shareholders for feeling a bit uneasy over the upcoming report, as the organization's shares surged 87% in 2017, and have followed this up with an additional 14 percentage points of gain just three weeks into the new year. Below, let's review three crucial themes which are relevant to long-term investors, whether the stock continues its run, or takes a breather after next Wednesday's earnings release.

PayPal's TPV is being driven by acceleration in customer additions. From the fourth quarter of 2016 to the third quarter of 2017, PayPal's intake of new customers accelerated from 10% year-over-year growth to 14% year-over-year growth. New customers of 8.2 million added in the third quarter alone bumped the company's total customer base to 218 million.

Of course, PayPal can't maintain a dramatic customer "adds" growth rate forever. In 2018, investors should focus on TPV, and the extent to which PayPal's avid partnering with retailers and other payment platforms can continue to widen its customer base.

An important metric to weigh in relation to TPV is PayPal's take rate, that is, the average revenue the company "takes" from each transaction it facilitates. While historically hovering around 3%, total take rate, calculated by dividing total revenue by TPV, has declined for several quarters, falling to a low of 2.84% in PayPal's most recent quarter.

Take rate has slipped due to a higher percentage of payments running through PayPal's Braintree subsidiary, as well as a growing TPV contribution from the company's hit social-payments app Venmo, which has only recently begun to be monetized.

So far, fast TPV growth has negated the decline in take rate. Through the first nine months of 2017, while PayPal's operating margin dipped slightly from 14.3% to 13.7%, operating income jumped 14% to $1.3 billion, as higher revenue outstripped transaction costs and general and administrative expense growth. This is easier to illustrate by charting a two-year trend of revenue versus operating margin: 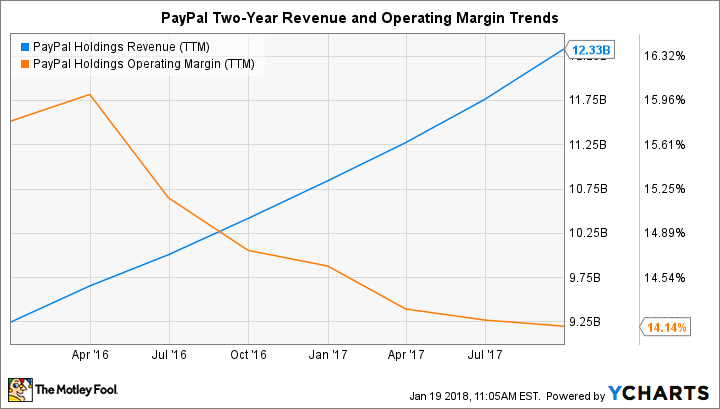 We can infer from the trend lines above that PayPal's profits can keep growing through brisk TPV improvement or a rise in take rate.

In October of last year, PayPal announced that it's enabling over 2 million retailers in the U.S. to accept payment through Venmo. This marks the first tangible attempt at monetization of the app, which has found viral adoptions from millennials. When PayPal reports on the 31st, investors will have a partial quarter of data to begin to measure how Venmo revenue might affect PayPal's take rate, and overall profitability.

While Venmo may have first popularized the concept of enabling peer-to-peer payments via a social platform, competitors are rushing in. Venmo's most tangible competition comes from Zelle, an app developed by a consortium of banks and credit unions which offers instant transfers between friends. Venmo transfers occur instantly, but funds typically take a few business days to settle. Thus, to dampen Zelle's advantage, Venmo has introduced instant settlements for a flat fee of $0.25.

It's hard to overstate how important Venmo is to PayPal's future. The platform is a key driver of PayPal's TPV, and management is clearly counting on it to bolster revenue in the coming years. Shareholders should seek to understand the app's initial success with merchants during the fourth quarter of 2017, as well as implications for PayPal's take rate. I've written a somewhat deeper analysis on Venmo's potential impact for those interested in the app's place within PayPal's business model. 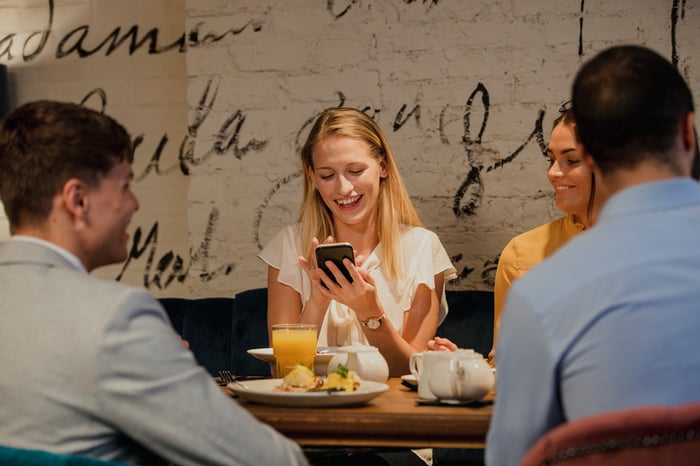 Venmo makes it easy for these friends to split the bill for dinner. Image source: Getty Images.

3. A change in capital allocation

In a conference call with analysts to discuss the transaction, PayPal CFO John Rainey explained that while extending credit to customers is an important part of PayPal's business, at core, the organization isn't a financing company. Moreover, Rainey explained that the funds required to maintain a credit portfolio are cannibalizing investment resources which could be used for higher-growth opportunities.

PayPal expects to free up $1 billion in capital annually through the Synchrony deal. In the company's upcoming earnings conference call, investors can expect management to discuss potential uses of the capital, which undoubtedly will include small acquisitions that carry an outsized impact. Some of PayPal's most promising revenue streams have resulted from bolt-on acquisitions. For example, the company obtained Venmo when it acquired subsidiary Braintree for $800 million in 2013. Purchasing growth companies can prove a vital tool in managing inevitable fluctuations in TPV over time.

The points I've discussed aren't the only threads to keep track of in PayPal's earnings narrative. But following the arc of these three major themes can help put the company's results in context, especially given the recent run-up in PayPal shares. And regardless of the market's instant reaction, investors should stay focused next week on whether the company's longer-term growth prospects remain vibrant. I, for one, predict that story line hasn't changed.