Do you like watching television? Do you like upgrades? Then you're going to love this news, because in a Wall Street two-fer, investment bank Morgan Stanley just announced a pair of upgrades for two of the key players in thin-film-transistor liquid-crystal display (TFT LCD).

Specifically, yesterday afternoon Morgan Stanley upgraded Taiwanese electronics specialist AU Optronics (OTC:AUO) and Korean panel maker LG Display (NYSE:LPL), both manufacturers of the screens that are the most visible elements of flat-panel televisions. AU Optronics got a one-step upgrade from equal weight to overweight, while the analyst's opinion of LG Display changed even more dramatically -- shifting 180 degrees from underweight to overweight. 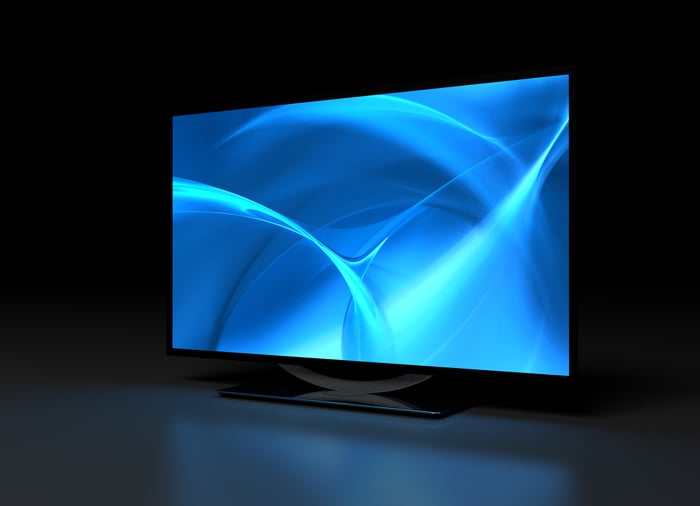 Morgan Stanley writes a glowing review of two flat panel makers -- but which one is best? Image source: Getty Images.

Both AU Optronics and LG Display benefit from Morgan Stanley's belief that the LCD TV market is about to experience an upswing. As related in a pair of notes on TheFly.com, LCD panel prices are expected to stabilize in the near future. Morgan Stanley even sees an "upside risk" of demand for TVs spiking, which would further support pricing power by the major panel manufacturers.

Market researcher IHS Markit places Taiwan's AU Optronics in the top ranks of panel makers worldwide. Despite the company's strong position in the market, though, Morgan Stanley notes that AU Optronics' stock price has underperformed the S&P 500. At a recent share price of $5, the stock is down roughly 10% from its early 2015 peak -- and roughly flat over the past five years, showing essentially no gains at whatsoever.

Improved demand for LCD TVs, however, means that AU Optronics' revenue "should revive in Q2 and Q3." That alone might be enough to lift the stock price, but in addition to stronger sales, Morgan Stanley is predicting " gross margins trending higher on the company's strategic focus on premium offerings, higher resolution, and curved panels."

The forecast for LG Display is similarly bright. Like its Taiwanese rival, LG Display stock has enjoyed few gains over the past five years, and sits only 13% above its February 2013 share price. The stock is down 3% from the middle of last year. Yet depending on the month, LG Display is often the largest LCD panel maker on the planet, and so likely to benefit disproportionately from any upturn in the market.

Morgan Stanley believes it is "unreasonable" for LG Display to be trading as low as it is today -- priced at just 0.8 times trailing book value, and 0.7 times projected 2018 book value. Accordingly, Morgan Stanley argues that the "recent retreat in stock price" at LG Display creates the potential for "favorable risk-reward" from buying the stock.

Long story short, Morgan Stanley likes both stocks. But which one should you like best?

Both AU Optronics and LG Display stocks sport enticingly low valuation multiples, costing just 0.4 times trailing sales and just 0.7 or 0.8 times book value. Valued on trailing earnings, both stocks look even more ridiculously cheap -- 3.8 times earnings for AU Optronics, and 4.7 for LG Display. What sets them apart though, in my view, is the quality of those earnings.

As data from S&P Global Market Intelligence show, LG Display's free cash flow for the first three reported quarters of 2017 is just $283 million -- a mere fraction of the $1.5 billion in GAAP profits the company claims to have earned. In contrast, AU Optronics generated $1.2 billion in free cash flow over the past nine months -- 25% more cash profit than it reported as net earnings on its income statement.

Result: At a valuation of barely three times trailing free cash flow, AU Optronics is actually even cheaper than its ultra-low P/E ratio lets on. Accordingly, I think it's a better buy than LG Display -- and a worthier recipient of Morgan Stanley's upgrade.