Finisar (NASDAQ:FNSR) recently made headlines after Apple (NASDAQ:AAPL) awarded the optical component specialist $390 million to help it ramp up production of lasers known as VSCELs. But is that vote of confidence from Apple enough reason to invest in a stock that has been up and down recently?

The Sunnyvale, California-based company has had a rocky few years due to a highly competitive market, softness in China, as well as some disappointing earnings.

But with an opening price on Jan. 18 of $20.93, a market cap of $2.4 billion, and a forward P/E ratio of 14.7, this stock has some investors wondering if they should jump on it -- particularly with cash cow Apple relying on it. 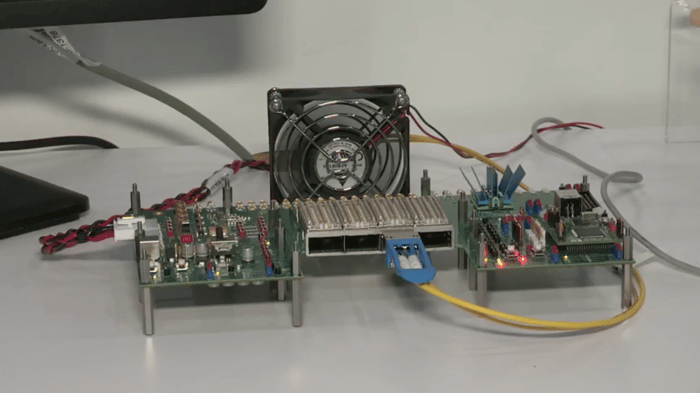 Finisar supposedly has the largest fiber optics manufacturing business by revenue, according to London-based consultancy firm Ovum. But does that matter? Because the space is so competitive, some say probably not.

Let's take a closer look at why that is.

"Operating scale does not necessarily translate into substantial cost advantage for Finisar to compete with smaller peers," he explained.

This is significant because the fiber optics space is highly fragmented, meaning Finisar has a number of competitors that could take clients from it. In addition, there isn't really a way for the company to set itself apart from the numerous other players because the network equipment providers that buy from them want the components to be interchangeable. This obviously discourages unique designs developed through Finisar's large R&D manufacturing sites that would help it create an economic moat, or competitive advantage, for itself. 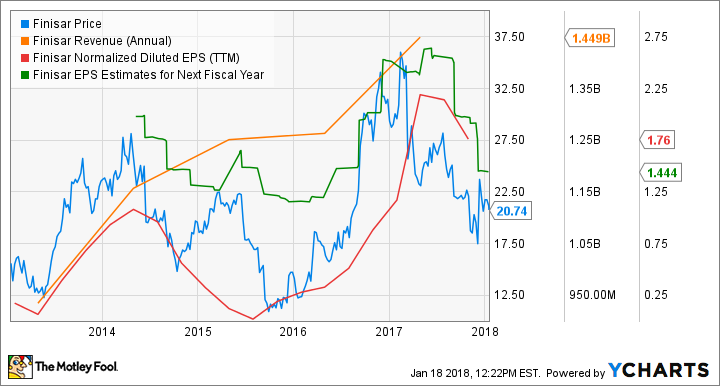 Finisar is coming off a rough year

Finisar may have boasted about Apple's reward in December, but that was one bright spot on an otherwise rather disappointing end to the year, partly due to soft demand in China.

Finisar said the main reason for the drop was lower sales in China. In January, the company suffered from a disqualification of 100G CFP2 supply to Chinese powerhouse Huawei due to firmware problems. Competitors Lumentum and Oclaro (NASDAQ:OCLR) benefited from this misstep as Finisar didn't start reshipping to Huawei until July. That means it lost sales to its largest market for half the year.

Due to the China issue, 2017 revenue can hopefully be considered a blip on its record that will reverse in 2018. In addition, Finisar is expected to benefit from the rollout of 5G networks as they come out over the next few years.

Okay, but what about that Apple investment?

The $390 million Apple investment being put toward building a 700,000-square-foot facility in Sherman, Texas to ramp up production of 3-D sensing lasers found in smartphones is significant.

The facility that's expected to open in the second half of 2018 will be busy as other smartphone makers look to copy Apple, which uses the lasers in its TrueDepth camera, facial recognition system, and wireless headphones called AirPods.

As 3-D sensing lasers are added to more smartphones, Finisar's revenue will get a healthy boost. Apple's investment is an indication that it plans to use these lasers for the foreseeable future and will probably add them to other devices, like the iPad, to enable facial recognition in other products.

Last year, Apple said it would purchase wafers from Finisar in the fourth quarter that amounted to "10 times more VSCEL wafers than were previously manufactured worldwide over a similar time period." That's a lot of wafers -- and explains why Apple choose to invest in another plant for Finisar as part of the $1 billion Advanced Manufacturing Fund it has pledged to spend on U.S. companies engaged in high-tech manufacturing.

For me, the bottom line is that Finisar and any other name in the fiber optics market is going to be risky as long as the market remains fragmented while also discouraging unique designs. Finisar doesn't have a path toward creating any particular advantages over other companies.

I think Finisar could have a more steady growth period with Apple and other smartphone makers needing 3-D sensing lasers. But I still don't think it's a safe bet. Better to just buy a couple more shares of Apple.