It may seem that dividend investing and a new tech trend like artificial intelligence are two diametrically opposed things. After all, income investors are usually seeking stable investments that they can bank on for years to come, while many tech trends are anything but predictable, and many often fizzle out.

But artificial intelligence is more than just a flash-in-the-pan idea. The field has been around for decades, it's expected to add $15.7 trillion to the global economy by 2030, and many tech companies are seeing real growth from their AI investments already. Income investors looking to capitalize on this transformative tech trend don't have sit this one out, because International Business Machines (NYSE:IBM) and Intel Corporation (NASDAQ:INTC) both offer strong dividends -- and both are betting AI will become a huge part of their future. 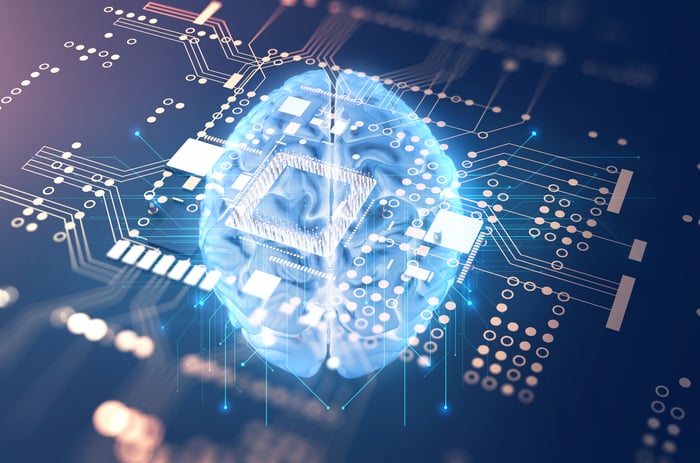 One of Intel's biggest plays on AI is in supplying chips that power artificial intelligence technology. The company made a big move a few years ago when it purchased a company called Altera for $16.7 billion, which made field programmable gate array chips (FPGA) for AI. The FPGA chips are good for Intel's AI plans because they have a very low latency (i.e. they process lots of information very quickly), they're very energy efficient, and they can be reprogrammed to handle different tasks.

But Intel is also in the process of building its own processors that are specifically designed for AI tasks. Intel just started shipping its Nervana Neural Network Processor (NNP), which is the direct result of the company's purchase of Nervana Systems in 2016. By 2020, the NNP chips will eventually make AI deep learning by about 100 times faster than it is right now, and they'll be used for data centers, which is an area of business Intel already knows a lot about. Intel currently holds about 96% of the data center market, and with its new AI chips it should continue that lead as more companies add artificial intelligence services to their data centers.

The company also took a huge leap forward in AI for driverless cars when it purchased the Advanced Driver Assistance Systems (ADAS) company Mobileye last year for $15.3 billion. Mobileye has about 70% of the ADAS market right now and is working with other companies, like Aptiv, to release a Level 4 autonomous vehicle driving system by 2019. With Mobileye's AI technology for cars, Intel is now expanding into the $127 billion (by 2027) driverless car business with its chips.

Intel is still transitioning away from some of its legacy chip business, but its high yield and current AI pursuits make this stock one that income investors should certainly consider.

IBM has long been a key player in AI, but its efforts have spiked recently as the company transitions away from some of its old revenue segments and toward its cognitive computing business. The company's management has said that it thinks cognitive computing will be a $2 trillion industry by 2025, and IBM believes its Watson AI services are poised to tap into it.

Watson AI is the company's cloud-based analytics AI software that companies can pay for to search through their own private clouds to discover valuable patterns of information. IBM says that retailers can use it to make daily forecasts of sales and financial companies can use it to determine which products are best to sell to their customers.

The tech giant also recently expanded its AI partnership with Salesforce and will soon build a specific Watson app that helps Salesforce customers create documents together. The two companies have been working on AI integration, and they recently said that their combined efforts have helped 4,000 clients use artificial intelligence to make better decisions for customer engagement.

IBM is eager to sell its Watson AI services to customers because its cognitive solutions segment has an impressive 79% gross profit margin (far higher than any of its other revenue segments), and that could eventually help reverse the company's current trend of revenue declines.

Dividend investors will love IBM's 3.7% forward dividend yield, its payout ratio of 48.5%, and the fact that the company has increased its dividend for 22 consecutive years.

Both companies are still in the middle of transitions right now, and AI is anything but a proven win for either company. But with Intel's and IBM's strong dividend yields, plus the fact that both are trading for less than 14 times their forward earnings, Intel and IBM both look like solid dividend plays in AI that also happen to be trading at a discount.