Ordinarily, I like to invest in companies I have personal experience with. I wouldn't blame you for doing the same. Peter Lynch's "Buy what you know" maxim is worthwhile in that it keeps you from investing in opaque companies.

But this month, I'm going to be buying shares of a Chinese conglomerate that I have zero experience with: Tencent Holdings (OTC:TCEHY). The reason is actually pretty simple: it is the most anti-fragile company I've ever evaluated.

I'll explain exactly what that means below. But the bottom line is this: Tencent has incredibly strong businesses in gaming and social media, with the opportunity to expand its reach over the years, and a balance sheet that could fund innovation for decades.

This is by far the most important pillar, so we'll devote the most time to it. A barbell is simply a way of thinking about a business. On one end, you want to have a wide-moat business that brings lots of sales and is relatively secure. For Tencent, that comes via its gaming and WeChat lines of business.

Few realize it, but Tencent is the world's largest gaming company, owning popular names like Honor of Kings and League of Legends. It is also the parent company of WeChat, an all-in-one app that has no peer in America. It is a part texting, part voice messaging, part social media, part e-commerce app that has 980 million monthly active users.

Both of these business lines are protected by the widening moat of the network effect, meaning the overall value of these services increases with each additional user.

If you want to play video games competitively, or with friends, you can only do it if you are on the most popular game networks. Tencent owns those game networks. If you want to communicate with friends via messaging or social media, or simply hail a cab, you can do that on the WeChat platform too, where virtually everyone is connected. It would be very difficult for the competition to supplant either business given its roster of users. 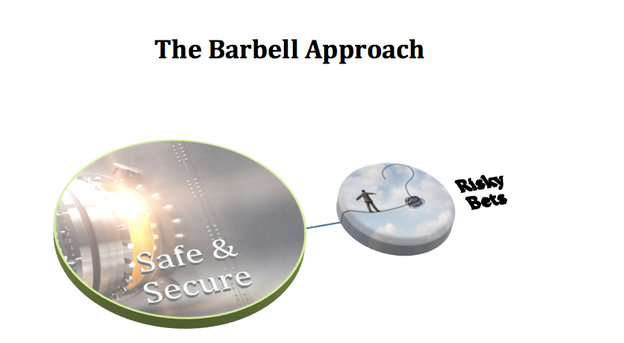 On the other end of this barbell, you want to see a company making lots of small bets that probably won't pay off -- but that would make meaningful differences to the company's overall sales and profitability if they do.

There are three ways that Tencent is trying to build this type of optionality:

Because of the vast amounts of data that Tencent can collect on the gaming and WeChat platforms, it has already seen advertising revenue grow over 300% since 2014 alone.

The company also has a revenue segment it simply refers to as "Other" that encompasses a burgeoning payment option as well as cloud services. That segment has seen revenue jump  350% over the same time frame.

If you put both sides of the barbell together, this is what it has looked like over the past three-plus years. 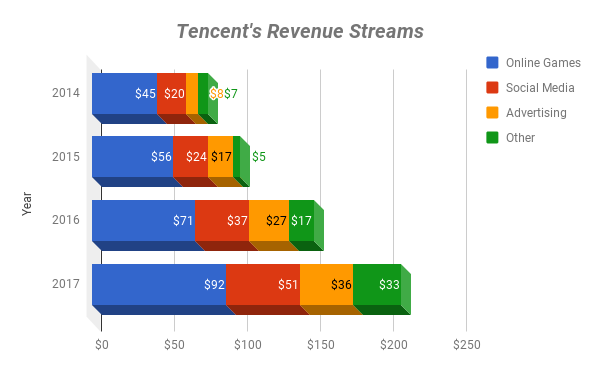 But it doesn't end there: Tencent has also used its cash hoard to invest in companies that it believes have promising growth prospects and have enough of a head start that it makes more sense to cooperate than compete. This includes owning, among others:

Next on the list is financial fortitude. Every company will -- at some point -- encounter difficult economic times. Those that are debt heavy are likely to be crushed during such periods. Those with merely stable balance sheets will remain the same. But those with stellar balance sheets will be antifragile, gaining strength because of, rather than in spite of, such chaos.

Here's a look at Tencent's balance sheet, translated into US dollars.

It's worth noting that I included the underlying value of Tencent's investments in certain companies in this figure. Had I removed "investments in associates," the cash balance would stand at $45 billion.

But the bigger point here is that the company has the type of balance sheet that will give it the ability to acquire smaller businesses in a downturn at depressed prices, lend with favorable terms in such situations, and price out any competition.

Antifragile pillar #3: Skin in the game

Finally, I like to know that those I'm putting my own money behind have their incentives aligned with my own. The fact that Tencent is still run by its founder -- Huateng "Pony" Ma -- after twenty years in existence is very encouraging. The fact that he still owns over 7% of shares outstanding is further encouraging, since it confirms that he has the company's long-term value creation front and center.

And when I check online to see what his employees think via Glassdoor.com ratings, I see that they give the company 4.3 out of five stars, with a CEO approval rating of 98%.

Combining all three of these pillars, I'm willing to put my own skin in the game when Motley Fool trading rules allow. If you have a decades-long time horizon, and willingness to put your money behind a company halfway around the world, I suggest you consider doing the same.