Since its IPO in late 2014, the Houston-based adoptive cell therapy company Bellicum Pharmaceuticals (NASDAQ:BLCM) has lost an incredible 65% of its value. This enormous drop is particularly noteworthy because it's occurred against the backdrop of an ever-rising chimeric antigen receptor T-cell (CAR-T) therapy space.

In the past four months alone, for instance, Gilead Sciences (NASDAQ:GILD) gobbled up Kite Pharma for nearly $12 billion, and Celgene Corp. announced it was acquiring the remaining shares of Juno Therapeutics for a whopping $9 billion earlier this week. 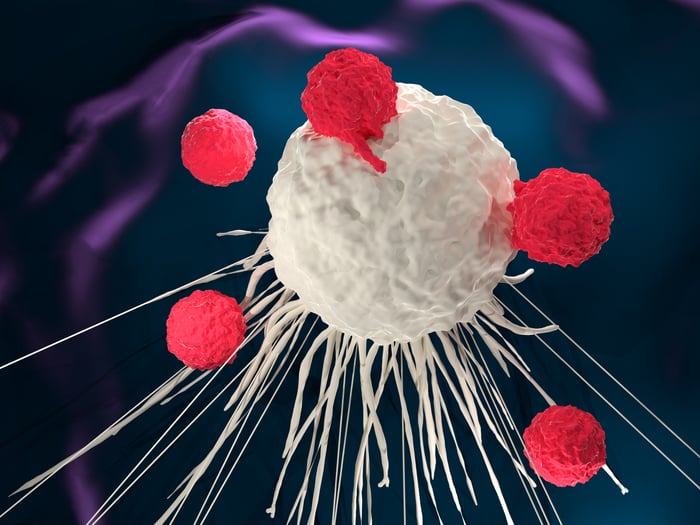 Meanwhile, bluebird bio (NASDAQ:BLUE) stock has also taken flight, thanks in large part to the stellar success of its experimental CAR-T therapy, bb2121. Its treatment for multiple myeloma is being developed with Celgene. And even smaller players like Atara Biotherapeutics, which is developing an off-the-shelf CAR-T product candidate, have benefited immensely from Wall Street's newfound passion for all things CAR-T.

With this rising tide in mind, it's worthwhile to consider if Bellicum can break out of this funk to join the rest of the surging CAR-T field. Let's dig deeper to find out.

A road to redemption?

The current generation of adoptive cell therapies generally rely on modified dosing regimens, coupled with immunosuppressants to control unwanted and potentially deadly side effects like cytokine release syndrome and neurotoxicity. While Bluebird's bb2121 has so far shown a milder range of side effects than Gilead's FDA-approved Yescarta (acquired from Kite Pharma) during clinical trials, there's still a lot of work to be done before these ground-breaking therapies are ready to be used in front-line patients.

Another key issue is that CAR-T therapies have also exhibited limited efficacy in solid tumors. The underlying problem is that it's immensely more difficult to identify the right biomarkers to readily distinguish healthy cells from malignant ones in the solid tumor setting. As such, the potential for off-site toxicities are considerably higher in solid tumors, compared to hematological malignancies.

Bellicum is hoping to solve these two fundamental problems using its molecular switch technology that can turn infused cell products "on" or "off" depending on the patient's response. In the event of a severe bout of cytokine release syndrome, for instance, Bellicum's platform allows clinicians to infuse a small molecule called rimiducid into a patient to trigger the built-in CaspaCIDe safety switch. This molecular safety switch, in turn, induces apoptosis (programmed cell death) of the offending cell therapy.

In a similar manner, rimiducid can also be used to activate CAR-T cells in the presence of a specific tumor antigen, whereby lowering the risk of off-site toxicities in solid tumors.

Bellicum's adoptive cell therapies should, therefore, be both safer and more precise than the current generation of products coming to market right now. If true, the biotech certainly could mount a furious comeback, and perhaps, even grab a position as a top dog in adoptive cell therapy.

But time is running short

Although Bellicum's tech is certainly impressive, the company is now facing a serious cash crunch that may slow its march toward producing a commercial-stage cell therapy. The company is currently advancing three adoptive cell therapies in clinical studies: BPX-501 as an adjunct T-cell therapy administered after haploidentical hematopoietic stem cell transplant, BPX-601 for nonresectable pancreatic cancer patients who test positive for prostate stem cell antigen, and BPX-701 for patients with refractory or relapsed AML and myelodysplastic syndromes.

Unfortunately, the biotech lacks a single product candidate capable of financing its clinical activities in the near term. BPX-501, the company's lead product candidate, may gain an accelerated regulatory approval in Europe within the next year, but the therapy's European sales aren't expected to be particularly noteworthy right away. In fact, these genetically modified cell therapies are widely expected to have fairly slow adoption rates due to the logistical hurdles involved in their commercialization.

Bellicum is forecast to close out the first quarter of 2018 with about $70 million in cash and investments. Based on the company's current burn rate, Bellicum appears to have less than three full quarters of cash remaining at this point.

Bellicum is either going to have to execute a massive secondary offering sometime this year (more than $100 million), or find a deep-pocketed partner willing to dole out a sizable amount of upfront cash within the next six months. Neither one of those scenarios bodes well for Bellicum's near-term outlook. The biotech's weak financial position, after all, is likely to have a negative impact on any potential licensing deals.

Management needed to stay ahead of this pending financial cliff, and so far, they have failed to do so for reasons unknown. As Bellicum now appears destined to continue diluting shareholders for the foreseeable future, investors may want to keep their distance -- despite the tremendous promise of its molecular switch platform.